Baiden on Ukrainian case: drawing a red herring across the path 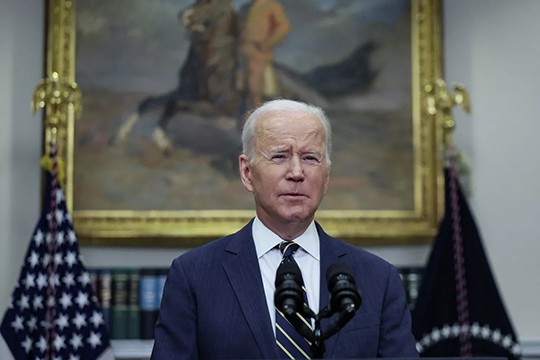 On May 31, 2022 President Biden shared his opinion in The New York Times entitled: “What America Will and Will Not Do in Ukraine”

Joseph Biden and the Editorial Board of such prominent newspaper probably were thinking that he will persuade the world that the third Ukrainian massive aggression started from 2015 after the Minsk accord versus Donbas is a just act. Highly likely they thought that the Kiev regime sooner or later will win, and will be able to wipe out all Russia-speaking majority from that region and regain Crimea with the aim to kick off all Russians from that peninsula.

It is wishful thinking, because it is impossible to bring it about.

First, Russia is still committed to reach its major goals in the “Operation Z”, and has enough military and economic power to liberate Ukraine from die-hard Nazism and limitless militarism.

Second, the problems with Joseph Biden’s revelations in The New York Times are not dealt with explaining something new. His stance is old: the Kiev regime should fight for “the last Ukrainian.”

Third, another setback is that his opinion lacks factual and political accuracy and contains many controversies.

E.g., he used the term: ‘Russian invasion into Ukraine”.

No, it has been Ukrainian invasion into Donbass whose citizens did not and do not want to live in the ultra-nationalist state with failed leaders who pursued and still pursues the policy of genocide against them from April 2014 till nowadays. In 2022 such active phase of the Ukrainian aggression began on February 14-17. That is before Moscow launched its defensive operation aimed at protecting the population of Donbass who have lost from 2014 till 2022 totally 14,000 civilians killed and 34,000 civilians wounded. All by the orders of Ukrainian rulers after the 2014 coup actively sponsored by the USA.

It is Ukraine that is still bombing of maternity hospitals and centers of culture and forced millions of people to leave the country as refugees and to move into other areas as IDPs.

Joseph Biden claimed that: “We want to see a democratic, independent, sovereign and prosperous Ukraine with the means to deter and defend itself against further aggression.”

No, the USA does not wish to see such scenario.  Its goals are different – his Administration does not want to see Ukraine as “democratic, independent, sovereign and prosperous”, because Nazism cannot live and survive in a democratic, independent, sovereign and prosperous country. Nazism can live and survive only in a dictatorship-ruled climate and tyranny – with the ban on freedom of speech, with all opponent political parties outlawed, and its people used as a human shield, etc.

The USA would like to continue a proxy war against Russia with the U.S. lethal weapons and by the hands of Ukrainians. Namely, for the following reason Joseph Biden outlined in The New York Times: “We have moved quickly to send Ukraine a significant amount of weaponry and ammunition so it can fight on the battlefield and be in the strongest possible position at the negotiating table.”

He also clearly stated: “That’s why I’ve decided that we will provide the Ukrainians with more advanced rocket systems and munitions that will enable them to more precisely strike key targets on the battlefield in Ukraine. We will continue cooperating with our allies and partners on Russian sanctions, the toughest ever imposed on a major economy. We will continue providing Ukraine with advanced weaponry, including Javelin anti-tank missiles, Stinger antiaircraft missiles, powerful artillery and precision rocket systems, radars, unmanned aerial vehicles, Mi-17 helicopters and ammunition. We will also send billions more in financial assistance, as authorized by Congress”.

The U.S. leader mentioned “precision rocket systems” in the upper paragraph. But what kind of?  Be them M31 as GMLRS and M142 as HIMERS  with the maximum firing range of 500 km and 300 km, respectively? It has been announced that  they will fire at the distance of no more than 80 km.

Ukrainian President Volodymir Zelensky also claimed that such American-made systems would not be employed against Russia.

But can this be verified by independent inspectors? Will such systems be used versus Donbass and Crimea, if they are not considered as Russian territories at all – both by Kiev and Washington?

In Biden’s words, “We will also continue reinforcing NATO’s eastern flank with forces and capabilities from the United States and other allies.”

What for and against whom? And why Joseph Biden said later: “We do not seek a war between NATO and Russia”. Is it not a controversy? All existing U.S. five key national military strategies, namely NSS, NDS, NPR, MDS and Space Strategy, as well as all NATO Summits’ strategic concepts and declarations outlined and outlines firm intention to fight with Russia and to destroy it as an adversary.

The current American leader has correctly admitted that: “We currently see no indication that Russia has intent to use nuclear weapons in Ukraine… “. True. However, he further continued in the same sentence: “… though Russia’s occasional rhetoric to rattle the nuclear saber is itself dangerous and extremely irresponsible”.

Where has he seen or heard such rhetoric? From the cables of the U.S. Embassy based in Moscow? Or from any market-place whistle-blowers? Actually nowhere. If so, it is unprofessional job of his staffers and speech-writers.

Nobody in Russia – neither President Vladimir Putin, nor Defense Minister Sergey Shoigu, nor Foreign Minister Sergei Lavrov have ever said that or even hinted that.

So, it is the USA and personally Mr. Joseph Biden, as well as his obedient companion Volodymir Zelensky are fully responsible for conducting a massive aggression versus Donbass – both for their personal aims: to stay in power as long as they wish. In case of Biden two more goals: to secure the Democratic Party victory in the mid-term elections in upcoming November, and to give a boost to the national military-industrial complex currently harvesting billions of dollars.

That is why recent Joseph Biden’s opinion on the Ukrainian developments expressed in the The New York Times looks like drawing a red herring across the path. Because nobody will find there any way out from the self-created impasse in that country he personally and his advisers have hammered out.