Bali: What happened is a negation of the spirit of the G20 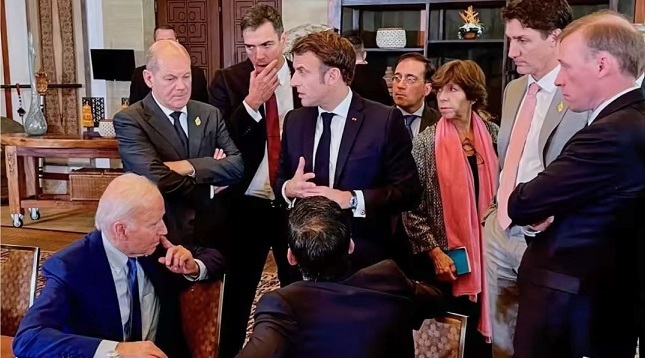 NATO leaders during G20 summit. As a flock...

“The golden rule that security issues do not fall within the purview of G20 has been broken. At the G20 summit, the Western countries held the rest of the participants at the Bali summit to ransom: ‘Our way or no way’. What happened is a negation of the spirit of the G20. If the G7 refuses to discard its bloc mentality, the cohesion of the G20 gets affected. The ‘G7-NATO joint statement’ could have been issued from Brussels or Washington or London. Why Bali?” – puts a question Indian prominent observer, Ambassador M.K. Bhadrakumar.

The seventeenth G20 Heads of State and Government Summit held in Bali, Indonesia- stands out as a consequential event from many angles. The international politics is at an inflection point and the transition will not leave unaffected any of the institutions inherited from the past that is drifting away forever.

However, the G20 can be an exception in bridging time past with time present and time future. The tidings from Bali leave a sense of mixed feelings of hope and despair.

The G20 was conceived against the backdrop of the financial crisis in 2007 — quintessentially, a western attempt to burnish the jaded G7 by bringing on board the emerging powers that stood outside it looking in, especially China, and thereby inject contemporaneity into global discourses.

The leitmotif was ‘harmony’. How far the Bali summit lived up to that expectation is the moot point today.

Regrettably, the G7 selectively dragged extraneous issues into the deliberations and its alter ego, North Atlantic Treaty Organization (NATO), made its maiden appearance in the Asia-Pacific. Arguably, the latter must be counted as a fateful happening during the Bali summit.

Unless the intransigent West was appeased on Ukraine issue, there could be no Bali declaration, so, Russia relented. The sordid drama showed that the Western world hasn’t changed. Bullying remains its distinguishing trait.

But, ironically, at the end of the day, what stood out was that the Bali Declaration failed to denounce Russia on the Ukraine issue. Countries such as Saudi Arabia and Turkey give reason for hope that G20 can regenerate itself. These countries were never Western colonies. They are dedicated to multipolarity, which will ultimately compel the West to concede that unilateralism and hegemony is unsustainable. The majority of countries have refused to take sides on Ukraine.

Fundamentally, therefore, multilateralism has become much harder in the present-day world situation. Nonetheless, the G20 is the only game in town to bring together the G7 and the aspiring developing countries who stands to gain out of a democratised world order.

The Western alliance system is rooted in the past. The bloc mentality holds little appeal to the developing countries. The gravitation of Turkey, Saudi Arabia and Indonesia toward the BRICS conveys a powerful message that the Western strategy in conceiving the G20 — to create a ring of subaltern states around the G7 — has outlived its utility.

The fault lines that appeared at Bali may take new forms by the time the G20 holds its 18th summit in India next year, emphasizes M.K. Bhadrakumar.