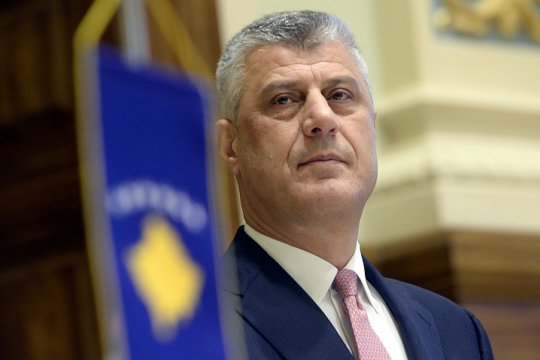 The idea of concluding an agreement between Belgrade and Pristina on the territorial delimitation between Serbs and Albanians, voiced by the president of self-proclaimed independent Kosovo, Hashim Thaci and supported by Serbian President Aleksandr Vučić, may be on the negotiating table in Brussels in early September 2018. Both presidents are to meet in the Belgian capital to resume the dialogue on the normalization of bilateral relations under the auspices of the European Union.

In the interpretation of Hashim Tachi, this involves "correcting the Kosovo-Serb border" with the annexation of three adjacent Southern Serbian regions in Presevo Valley with predominantly Albanian population to Kosovo. If such an agreement is reached at the level of the leaders of Belgrade and Pristina “nobody will be able to interfere with its implementation - neither the EU, nor NATO, nor the United States”, the Kosovo president emphasized. Hashim Thaci even suggested holding a referendum in the relevant areas to resolve territorial issues, the decisions of which will have binding international legal force.

For his part, the head of Serbia, Aleksandar Vučić, refusing to speak on the status of the Presevo Valley, supported the idea of dividing Kosovo into Serbian and Albanian parts, stressing that otherwise in the next few decades, the Serbs will have to restrain Albanians already in cities outside Kosovo: “Do not want a differentiation with the Albanians? No problem, just tell people that we should be  ready to protect Vranje in 40 years if you do not see that our people are being evicted from there today." "I stand for it and I do not hide it. I act and represent it as my policy, whether it will get the support of the people or not, but I stand for differentiation with the Albanians"? he said. [1]

Addressing his opponents inside Serbia who see in the Kosovo division the act of national betrayal and the waiver of the "cradle of Serbian statehood," Aleksandar Vučić accused them of unwillingness to really solve the Kosovo problem and even trying to use the Kosovo problem  for "overthrowing power in Serbia": "They want to feel safe today, but what will happen tomorrow? It does not bother them." I will not "wash my hands" like Pontius Pilate, but I will go out to the people with my draft resolution of settling the Kosovo problem" - promised Aleksandar Vučić, stressing that  until now he had no opportunity to negotiate directly with the Albanians themselves. [2]

The possible achievement of a "package  agreement" between Belgrade and Pristina on the normalization of bilateral relations and the resolution of territorial issues is of growing interest in the Republika Srpska, which is part of Bosnia and Herzegovina. According to its President Milorad Dodik, if Kosovo is accepted to the UN and other international institutions with the consent of Serbia and its other opponents, the Republika Srpska will also seek accession to these structures.

The leader of the Bosnian Serbs stressed that the Kosovo problem cannot be solved separately from the Republika Srpska issue and recalled the resolution adopted by the parliament at Banja Luka in 2008. It said that in view of "establishing a new principle and international practice of recognizing the right to self-determination", this state-forming entity of Bosnia and Herzegovina will seek for itself the status of the state. [3]

Unlike the Balkan leaders, the European Union was seriously worried about the possible achievement of territorial compromises between Belgrade and Pristina and their possible extrapolation to other "disputed" areas of the Balkans. "Europeans are alarmed by the discussions about the borders between Serbia and Kosovo" as the territories exchange is "a risky bet in the Balkans", - the Paris Le Monde  newspaper points out. It quotes the opinion of one of the leading EU diplomats who dealt with the settlement of interethnic conflicts, including in the Balkans and the former Soviet Union, Pierre Morel. "This is a great danger for the whole region" - the diplomat said, referring to the potential "escalation of movements for the renewal of borders on ethnic principles". Such escalation can "infect" countries such as Macedonia, Montenegro or Bosnia and Herzegovina, where "many national minorities are struggling to coexist" - Le Monde points out.

Particular attention in this regard should be paid to Macedonia, taking into account the additional "risk factors" relative to this former Yugoslav republic. Among them is the threat of new internal political turmoil in the conditions of the refusal of a significant part of society (led by the president) to support an intergovernmental agreement with Greece on changing the name of the state.

As for the Albanian factor, the starting point for the "institutionalization" of Albanians' demands was the 2001 Ohrid Peace Agreement. The rights of the Albanian minority proclaimed in this agreement actually turned Macedonia into a confederation. In particular, we are talking about such provisions as "unlimited use of the Albanian language as a service language in Macedonia" and "the introduction of consensus democracy in areas of activity that relate to ethnic rights."

It is hardly an exaggeration to say that the very existence of Macedonia as a single state under the circumstances is primarily dependent on the "goodwill" of  the Albanian minority, which, according to various estimates, is between a quarter and one-third of the total population of the country.

Neither should we disregard the factor of NATO. In this relation, it should be recalled that the conclusion of the Ohrid Peace Agreement between the Government of Macedonia and the leaders of local Albanians was preceded by the signing of the so-called "Framework Agreement" between Macedonia and the North Atlantic Alliance. The amendments to the country's constitution and other changes to the national legislation documented in this document were declared "an agreed framework for the future democracy in Macedonia".

Such a consolidation of  dramatic changes in the legislation (concerning the very foundations of the national-state system) through an agreement with NATO was unprecedented even by Balkan measures but did not lead to a significant stabilization of the situation in Macedonia. It is no accident that experts from the International Crisis Group stated in 2006 that "the practical and political challenges facing the country still do not allow us to call it a stable post-conflict democracy."

There can be no doubt that the leaders of the Macedonian Albanians will try to make maximum use of the Belgrade-Pristina agreements on territorial issues for their own purposes - despite the current opposition from the European Union.

The fact is that, according to available data, the idea of territorial "exchanges" between Belgrade and Pristina has recently received secret impulses from the United States. In reaching the relevant agreement Donald Trump's administration saw a simple and convenient means of normalizing the situation in the Balkans and at the same time increasing its own rating in the eyes of both Serbs and Albanians, and "detachment" of Serbia from Russia. The Kosovo problem was actively discussed during the recent visit to Washington of the Serbian Prime Minister Ana Brnabic. There she held meetings, including with US congressmen. "Washington, which has long opposed to any change in borders and has supported Kosovo since the 1999 war, seems to have also softened its position after Donald Trump came to power. Softened it to the extent that many European diplomats are now alarmed, what if the United States has managed to agree on a similar decision with Russia, which historically supports Serbia," - worries Le Monde.

Under the current conditions, it can be predicted that all those interested in the new redrawing of the Balkan borders will try to take advantage of the contradictions between Brussels and Washington in their own interests in order to ensure for themselves the maximum advantages of both territorial and financial  nature. This, in turn, requires Russia to be more attentive to the Balkan processes that can become a catalyst for the corresponding "shifts" including in the post-Soviet space in the spirit of the well-known concept of Realpolitik.

At the same time, one should take into account the fact that many negotiators themselves are not at all inclined to expand their format and, in particular, to involve Russia as a permanent member of the UN Security Council. Thus, Serbian Foreign Minister Ivica Dacic rejects the possibility of Russia joining the dialogue between Belgrade and Pristina, stressing that the format of such negotiations will remain "as it is" and its expansion will not happen: "There are no such plans". [5]

However,  this does not prevent the leaders of Serbia from specifically discussing the above issues with the United States. Thus, in order not to "lose" the Balkans, Russian diplomacy should be more "proactive" and put forward their own initiatives that meet both its own interests and the interests of current and potential  partners in the Balkan region and beyond.