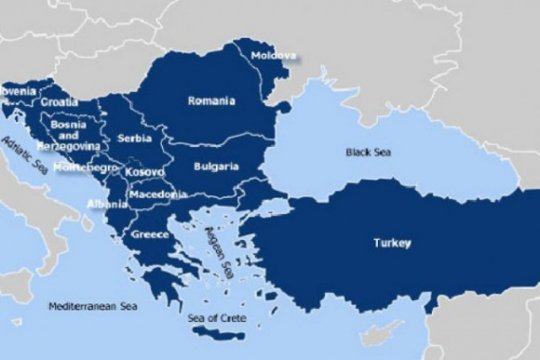 After the NATO aggression against Serbia and Montenegro in 1999, the United States of America, having established full control over the Balkans, shifted its focus after 2000 to the Middle East. The United States continued to be heavily present in the Balkans, but indirectly through its allies, who continued their policy of expanding NATO and the European Union. The separation of Montenegro from the state union with Serbia in 2006 and the proclamation of the independence of Kosovo in 2008 definitely influenced the change in geopolitical relations in the region. Namely, by the territorial "narrowing down and economic weakening" of Serbia, the United States significantly weakened Serbian influence on the neighboring countries, thereby affecting the establishment of a regional balance. Furthermore, the third round of NATO enlargement, with the membership of Croatia and Albania in NATO in 2009, as well as with Montenegro's entry into NATO in 2017, the United States has in a geostrategic view "rounded up" the area of the Western Balkans, geopolitically extremely important for the control of the Adriatic basin, the eastern Mediterranean and the Black Sea region.

For some time it's clear that the power of the West is weakening in the world, and these changes are also felt in the Balkans. Lately voting at the Interpol assembly showed that the political West no longer has the power it had until recently. Or, as it said Serbian Minister of Foreign Affairs Ivica Dacic, " it turned out that it was not enough that some great powers send requests and that all fulfill and support all their demands”. For the West neither did help the open pressure towards some countries.

The West has not become military and economically weak, the budget for the military is on the contrary increased, however, in the meantime, two superpowers, Russia and China appeared. It is clear that the world slowly becomes multipolar. What is important to emphasize is that the West is losing soft power in the Balkans. And without soft power, Western policy in the Balkans shows the true face. This was best seen on October 19 in the Macedonian Parliament, when the Macedonian parliament passed constitutional changes that allowed the country to be called Republic of Northern Macedonia. To change the name, voted 80 MPs, thus reaching a two-thirds majority of 120 MPs needed to initiate constitutional changes. On which way this two-thirds majority was reach in the Macedonian Parliament, is best seen by the tweet of the Greek Defense Minister Panos Kamenos: "Who could think that in the European value system and democracy those who do not vote by the orders are arrested and voters who are obedient receive a bonus of two million euros of ‘dirty money’. I am ashamed". This tweet of the Greek Defense Minister shows how Western diplomats achieve their goals in the Balkans. The result of this vote will be that (Northern) Macedonia will sign the NATO Membership Protocol in January 2019, after which formal negotiations on NATO accession could begin as well as the ratification process in the parliaments of all 29 member states, which could mean that (Northern) Macedonia could become a full member by 2020. And that will mean that the NATO ring around Serbia and Republic of Srpska (Bosnia and Hercegovina)  will be completely closed. Since in Serbia is the lowest support for joining NATO, it will be left as the last state to join NATO.

Pressures in Bosnia and Herzegovina have already begun. Despite the fact that Republic of Srpska voted a resolution on neutrality in October 2017, NATO recently sent Bosnia and Herzegovina an action plan for NATO membership. The realization of the First Annual National Program would increase financial obligations, from the current 1.33% of GDP, Bosnia and Hercegovina would have to allocate for defense from 1.8% to 2.2% of GDP, which would certainly be a new blow to the economy of this impoverished state union.

Unrest in the Balkans

Recently, the leader of the Bosniaks Bakir Izetbegovic spoke about arming: “Poor neighbors spend money on expensive weapons. You see these rocket systems and planes in Serbia and Croatia, and we must keep the balance in all of this, because weakness attracts",Izetbegovic said.

This is also indicated by the arming of Croatian armed forces in recent years. The Pentagon donated Croatia 16 OH-58D Kiowa Warrior helicopters, used for observation, utility and direct fire support. The obligation of Croatia was  to pay all the taxes and the pilot training: the price tag – 30 million dollars. Croatia also has acquired Patria armorued personnel vehicles, the self-propeled PzH Howitzers and signed a contract to buy 12 used F-16 Barak fighter jets from Israel. In the meantime, US has blocked the delivery of Israeli fighter jets because the Israelis have upgraded them. In any case, Croatia has decided to acquire a squadron of fighter jets. Apart from the above, Croatia will get from Unated Stated two tactical transport helicopters UH-60 Black Hawk, also under very favorable conditions. Also the Croatian Army has held comprehensive inter-service joint exercise of all components of the Croatian Armed Forces titled “Velebit 18 – Joint Force” which is the largest military exercise of Croatian army since the end of the war. It was conducted continuously for 72 hours from 13 to 15 October 2018 on multiple locations in the Republic of Croatia. It engaged a total of 5,500 members of the Croatian Armed Forces, including the reserve component. Croatian Army tested the attained level of capabilities pertaining  the defence of the national territory and to test the newly introduced weapons and equipment. However, bearing in mind that in NATO there is the principe of collective defense, which means that if someone threatens the security of Croatia, NATO is obliged to defend it, a logical question arises why Croatia should invest significant money in the purchase of arms as well as in serious military exercises. Especially having in mind that Croatia is at the bottom end of scale when it comes to EU countries economies. People are leaving Croatia, mostly young educated people. The answer is pretty clear, when we see that this process is done with strategic cooperation with United States.

The dramatic armament of Croatia has significantly disturbed the balance of power in the Balkans. So Serbia also began with serious equipping and arming. That could be seen on combined tactical exercise with combat shooting ”The Century of Winners 1918-2018” which was held at the Pester provisional testing range, on which Serbia marked the 100th anniversary of the victory in the First World War but also sent a clear message. It was one of the largest military exercises in the region, which included 8,000 members of the Serbian Armed Forces, with around 645 combat systems. The exercise has simultaneosly taken place in ten locations in Serbia where air force and infantry troops performed planned, training and combat activities with the engagement of 100 tanks, 100 combat vehicles, 100 artillery systems and with the ground and air defence missile systems.

Serbian Defense Minister Aleksandar Vulin stated that in 2018 Serbia has introduced in service nine fighter jets "MIG 29" and that in accordance with the agreement on military-technical cooperation with Belarus, in 2019 another four fighter jets “MIG 29” of the same type will be delivered. Agreements on the purchase of four Mi-35 combat helicopters and three transport Mi-17 B5 from Russia were concluded also. In the middle of the 2019 will be delivered the first H145M medium-sized military multirole helicopter. However, the most important will be the acquisition of the Pantsir-S missile system, a self-propelled, medium range surface-to-air missile system. Should be noted, that Serbia as the only state in the Balkans that proclaimed neutrality, is forced to have a trained and equipped army.

And that the weapons in the Balkans is not acquired just like that, shows the statement of European Union Commision chief Jean-Claude Juncker who warned at the beginning of October 2018 of a possible new war in the Balkans if Bosnia, Albania, Serbia, Macedonia, Montenegro and Kosovo do not feel the EU is serious about offering them future membership.

“If, in Europe’s highly complicated landscape, the impression arises, that we’re not serious about offering the prospect of EU membership to the western Balkans, then we might see later – and probably even sooner – what we saw in Balkans in the 1990s,’’ Juncker said in a speech to the Austrian parliament. In other words, if the West does not control the Balkans, war can become reality. In the coming period, the tensions will only grow in the Balkans, and there is a real chance that if the West can not achieve its goals peacefully, it will do it violently, as they did in Croatia, Kosovo, Macedonia in the near past.  Without any doubt, pressure on Serbs will be getting stronger. That is why it requires a stronger presence of Russia in the Balkans, primarily in Serbia and Republic of Srpska.