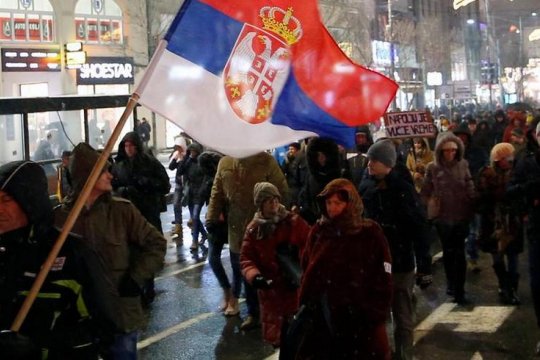 Anti-government protests have continued over the weekend in Serbia, Montenegro and Albania. While the protesters in Albania once again clashed with the police, Saturday evening marked the first time that preventive force was used against the participants of Belgrade demonstartions, who entered the building of the country`s public broadcaster.

Protests in all three countries are aiming to overthrow the ruling parties led by President Aleksandar Vučić, Prime Minister Edi Rama and President Milo Djukanovic respectively. The regimes are accused of corruption, suppresion of democracy and media freedoms as well as for bad economic situation.

On 16 March, dozens of demonstrators, lead by opposition politicians Bosko Obradovic and Dragan Djilas, entered the headqurters of Radio-Television of Serbia (RTS), bypassing the security and demanding an opportunity to adress the viewership live. Since the protests have begun in early December, none of the organizers has been invited to RTS, which is still the most watched television channel in the country.(1)

There were no acts of violence, and the police managed to remove the citizens from the building after several hours, with some accusations of disproportionately harsh treatment.

President Vucic announced that he will be addressing the incident during an extraordinary press conference on Sunday afternoon. Breaking from the traditional protest walks on Saturday, the organizers announced in return that they will be staging protests in the front of the Presidency at the same time, demanding Vucic`s resignation.

Earlier this week, the parties gathered in the Alliance for Serbia, the country`s strongest opposition coalition, gave Vucic and other high state officials a month to resign from their offces, or face demonstrators from all across Serbia who will gather on 13 April in Belgrade if the demands are not met by then. This is the first protests explicitly organized by the opposition politicians, who have started to address the attending citizens more and more every week, taking the role from the popular public figures and representatives of civic initiative.

At the same time, protests in Albania have been openly organized by the opposition from the start. Democratic Party MPs, along with several other opposition parties, have resigned from their parliamentary posts in February. DP`s leader Luilzim Basha has been at the forefront of the demonstrations from their start.

On the 16 March, protesters in Albania once again tried to storm the offices of Prime Minister Rama, and then the national parliament.(2) They were stopped in the latter attempt by the police, who threw tear gas and used water cannons to disperse them. At least one protester was incapacitated. Police used tear gas and water cannons to disperse the crowd, but many of protesters were prepared with gas masks. Protestants threw stones and smoke bombs at police, pulling down security fences that were erected ahead of the demonstration. The rally drew thousands of protesters from across the country. Opposition Democratic Party leader Lulzim Basha was cheered when he appeared in the crowd, leading them on a march to the Office of Prime Minister Edi Rama, where police were already positioned.

Basha announced that various forms of citizen`s resistance will be held across the country. Both US Embassy and EU delegation to Albania condemned the violence, and urged the organizers to prevent it from escalating during future protests.

From the most massive protest "Resist 97,000" so far, which were joined also by students, which was held on 16 March at the Independence Square in Podgorica, was announced that the government privatized the state and protesters again requested the resignation of top officials.(3) Students, academics, civic activists who say they are not affiliated with any political party, marched through the center of Podgorica chanting “We are the state”, “Rebellion” and mostly “Milo thief”. Opposition parties support the protests which started in early February but their leaders have distanced themselves of taking prominent role in the organization or addressing the crowd. An informal group of NGO activists, academics, journalists stand behind the protests. Beside the resignation of President Djukanovic, who has ruled for almost 30 years, the protesters demand the resignation of the Supreme State Prosecutor Ivica Stankovic, and the Chief Prosecutor for Organised Crime Milivoje Katnic. They accuse senior law officials of ignoring evidence and not prosecuting widespread corruption in the country. Saturday`s protest was the fifth in a row. It follows the revelation of footage and documents that appear to implicate top officials in obtaining suspicious funds for the ruling Democratic Party of Socialists (DPS). A video clip from 2016 aired in January showed Dusko Knezevic, chairman of the Montenegro-based Atlas Group, appearing to hand the then mayor of Podgorica, Slavoljub Stijepovic, an envelope containing $100,000, to fund a DPS election campaign. Knezevic, who is in London, has since than told the media he had been providing secret cash to the DPS for the past 25 years.

At the protest on Saturday, were more than 15,000 people, which is a big figure if we take into account that the official population of Montenegro is 620, 000 people and in reality due to emigration significantly lower. Gathering to demand the resignations of the most senior state officials, beginning with the President Milo Djukanovic, who has been in power since 1991. The demonstrations have been sparked by the numerous affairs that have revealed the extent of corruption in the ruling party. They are taking place every Saturday, and the next ones are announced for 23 March.

Recent years in the Western Balkans have been shaped by stabilocracies. Governments that first of all fulfill the geopolitical goals of the West. And because of that, by the West, as a reward they have the possibility of human rights violations, corruption and crime, full control of the media. Current protests are the answer to the stabilocracy.

In Albania, corruption and crime are out of control and the demands of the protest are completely legitimate. On the wave of fighting crime and corruption, along with promises for a better future, Edi Rama also come to power. However, the United States of America and the European Union are opposed to protests and for them Parliament is the place where all political solutions need to be found. However, in Parliament as well as in elections, nothing can change in Albania, primarily because of corruption. Because of corruption and crime, which are strongly rooted in Albania, as well as with bad economic situation, the emigration rate is high. Since Albania toppled communism in 1991 untill the end of 2018, more than 1.4 million Albanians, nearly half the current population of this Balkan country, have emigrated mostly to neighboring Italy and Greece and less to the Britain, Germany and the United States. The study, led by Rusell King of the University of Sussex and Albanian researcher Ilir Gedeshi, found that the country’s potential migration had grown from 44 percent in 2007 to 52 precent in 2018. (4)

In Montenegro, the organizers of the protest are the biggest problem. Since the beginning of the protest, they are not conducted professionally, which lead to indignation in a part of the citizens. Protest organizers have offered the opposition parties an “Agreement about future“ which is more likely an ultimatum, in which there is an item that foreign policy of current Government, would not change. The document is submitted to the opposition on principle - take it or leave it. That's why Dusko Knezevic spoke. Dusko Knezevic made an announcement and made it clear to the protest leaders that he will not allow them to make struggle on the opposition, but to fight against president of Montenegro Milo Djukanovic.(5)

Certainly, the situation in Serbia is most interesting for monitoring, given that it is the most powerful state of the Western Balkans. In the West, it is clear to everyone that Vucic is hated among his people. Aleksandar Vucic put all media under his control, so the opposition is rarely seen on television. While Aleksandar Vucic is over-represented in the media, which causes frustration among the citizens. In addition, the poor economic situation and the constant false promises that it will be better reinforce dissatisfaction. Additionally Aleksandar Vucic "wants to solve the issue of Kosovo" by demarcation, which means that 90 percent of Kosovo would belong to Albania. Because of all of the above massive protests take place in 100 cities in Serbia.

The situation in Serbia is clear to the West, but there is no reliable pro-NATO alternative in the opposition, and the priority work of surrendering Kosovo to "Greater Albania" is not yet completed. West is afraid that protests in Belgrade and in 100 cities in Serbia are not going in the right direction. For this reason, they are forced to endure current Serbian president Aleksandar Vucic, who not only fulfills the requirements of the West, but in good terms anesthetizes Russia by saying exactly the words Moscow wants to hear: that Serbia will never impose sanctions to Russia, that Serbia will never enter in NATO, and that he is pro-Russian. Of course, according to agreements with NATO signed during the time of Vucic's authorities and some other details, it is obvious that his affection for Moscow is a lie. Aleksandar Vucic persistently refuses to grant diplomatic status to the Russian Humanitarian Center in Nis, and if Russia repeatedly asked for it. At the same time, cooperation with NATO has been strengthened and NATO soldiers in Serbia have a diplomatic status. At the moment of a potential "delineation" satisfied with Vucic's words, when Kosovo enters NATO, Vucic will probably say that "changed circumstances" force Serbia to reconsider its neutrality. Serbia would become NATO member, and of course, impose sanctions against Russia, given that it is a request of the European Union, and entering in the European Union is a strategic goal for Vucic. Russia already has an example of Vucic's close friend in Montenegro, Milo Djukanovic, who in his time was close friend of Russia, but later introduced sanctions against Russia, against the will of the people in Montenegro, pulled the country into NATO, and even blamed Moscow for engaging in a fictitious coup against him.

One of the opposition leaders  in Serbia Vuk Jeremic, speaks openly that official Brussels and Washington made it clear to him that they are against the protests until Vucic does not solve the issue of Kosovo. It is precisely the geopolitical interests of the West that can disturb the success of protests in Serbia. All in all, in the Balkans, something similar to the Arab spring can not happen, because all the governments in Balkans are pro-Western. But certainly these protests will bring more freedom to the Balkans.