Balkans move away from the EU 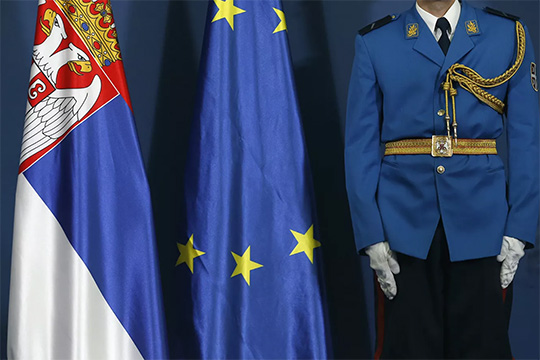 The European Union is set to radically re-consider its enlargement strategy. This could somewhat soften the criticism coming from the eurosceptics who are dissatisfied with the backlog of political and economic “gaps” within the EU. On the other hand, the Balkan states, which have become disillusioned over the prospective outcomes of their entry into the EU, could, in turn, re-direct their own policies towards strengthening cooperation with other globalplayers, including Russia.

According to sources in Brussels, the EU is planning to offer the Balkan candidate countries a new entry model – a gradual, step-by-step economic integration in the format of “privileged partnership” which should replace institutional membership. This new mechanism of bulding relations with the Balkans is to be adopted within six months, before a EU-Balkan summit due to take place in May 2020.

The revision of the EU’s expansion policy was initiated by Paris, Copenhagen and Amsterdam. At the last EU summit in October this year French President Emmanuel Macron blocked the start of negotiations on giving EU membership to  Northern Macedonia, although it had met all the requirements for joining the Union. Denmark and the Netherlands came up against negotiations with Albania. Simultaneously, the French president made it clear that the EU enlargement process would continue only if the integration model was changed, which gave rise to the corresponding discussions in Brussels.

According to the European Stability Initiative (ESI) international research center, instead of EU membership, the Balkan states will be offered membership in the European Economic Area (EEA) by analogy with a membership model for Norway, Switzerland and Iceland.

The leading European countries reacted to the proposal with restraint,  particularly Germany, which has been keeping a close eye on what is happening in the Balkans and considers this region a priority area. The German Foreign Ministry said in an obscure manner that Berlin "is open for discussing specific reforms that would streamline the expansion process and provide yet greater support to candidate countries as they strive for EU membership."

The leaders of the Balkan countries themselves sound more to the point. Montenegrin President Milo Djukanovic has acknowledged that “some European circles have been contemplating a new model of negotiations with EU candidates.” “The game began in 2003 at the summit in Thessaloniki, when the EU clearly outlined the platform on which its expansion policy in the Balkans hinged. For Montenegro, this platform was formulated in 2012. To change the rules of the game after 16 and 7 years, respectively, is not the right thing to do,” - he said.

According to the Montenegrin president, “the policy of EU's further expansion and whether this policy is set to continue should be discussed with the participation of not only EU members, but also the Balkan countries, which are part of Europe”.

His Macedonian counterpart, Stevo Pendarovsky, openly announced that at the recent talks in Brussels his country “was presented with a compensation for EU membership in the form of the European Economic Area.” “We don’t need an alternative to EU membership, as it has nothing to do with a united Europe or a common European home. If they offer the EEA, it has nothing to do with membership. We must say no, thanks. There are no alternatives to membership, even if this membership happens in 20 years, ” - the Macedonian leader emphasized.

Other Balkan capitals have also expressed disappointment. “The European Union has assumed certain commitments regarding the Balkans, so changing this approach and sending the Balkan countries to the waiting room would cause more instability in the region. In addition, some in the region will begin to look for an alternative in China, Russia, and Turkey,” - Dragan Djukanovic, head of the Belgrade Center for Foreign Policy, said expressing hope that “the currently proclaimed new approach to EU enlargement may not see light. ” [1]

“Since the fall of the Berlin Wall 30 years ago, Western leaders have consistently maintained that there are no problems on the European continent that could not be resolved through interaction with the European Union or expansion of the European project. But this approach seems to have undergone changes due to the mixture of EU’s internal problems and the American indifference,” - writes the American edition of The Project Syndicate:“ Disappointment, or even anger, over the decision made by Emmanuel Macron is strongly felt in Tirana and Skopje. " According to the publication, the main reason is that the French president "is concerned that the continuing expansion of the European bloc will impede the reform of European governance structures." [2]

The Balkan countries have agreed to work out a joint response to the new EU model. As they gathered in the Macedonian city of Ohrid on November 10th the prime ministers of Albania and Northern Macedonia, Edi Rama and Zoran Zaev, and also the President of Serbia, Aleksandar Vučić, signed a joint declaration on the “Balkan mini-Schengen”, which envisages the removal of barriers to free movement of people, goods, services and capitals on the territory of Western Balkans. The document attaches top priority to the development of Balkan regional cooperation pointing out that the purpose of all the signatories is membership in the EU, and not in the European Economic Area. [3]

Reports of the weakening of EU interest in the Balkans come at a critical time for the region. In particular, the victory in Kosovo elections of the radical politician Albin Kurti, who upholds the idea of creating "Great Albania", has already fuelled tensions in the Serbian-populated areas of the region. Serbian Minister of Defense Alexander Vulin does not rule out the possibility that Kosovo Serbs may “mount an insurgency” if the candidate for the post of prime minister of Kosovo continues to sow discord among them. [4]

What is meant is Pristina’s decision to exclude the Kosovo Serb ballots which had been delivered from Serbia from the final election results,

Given the situation, we can expect a broader split within the European Union on the Balkan issue, in particular, between Paris and Berlin, and we observe the Balkan capitals demonstrating a particular interest in alternative integration projects, including with the participation of Russia, China and other world powers.