Belgium's EU Presidency and the Albanian Question in the «United Europe» 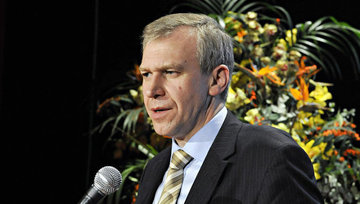 Belgium took on the rotating 6-month EU presidency on July 1. Due to the country's own internal divisions and occasionally strained relations with the Balkan EU hopefuls, Belgium's presidency will likely confront the “united Europe” with a serious test. Just one of an array of reasons why the nearest future may hold new problems for the already embattled EU is that currently Belgium has an interim government. In a rather ironic recent comment, Radio France Internationale described the whole arrangement as somewhat eccentric [1].

The June 13 snap parliamentary elections in Belgium established Flemish separatists as the largest party in the prosperous Flanders. Consultations meant to produce a coalition agreement ended in a stalemate, forcing Prime Minister Yves Leterme to admit that a new government would be formed at best by mid-fall and that the outgoing cabinet would in fact serve as a caretaker government. In the coming two weeks, the Belgian government's ministers and state secretaries – a total of 21 politicians – will be questioned by the alarmed European parliament where they will have to spell out to various commissions the priorities of Belgium's EU presidency. Yves Leterme will also deliver a talk during the European parliament's plenary session [2].

Strictly speaking, this is not the first time the EU presidency is held by a country with a caretaker government. The Czech Republic where Mirek Topolanek's center-right government had been defeated in a parliamentary no-confidence vote presided over the EU in the first half of 2009. In that case, the European Commission even issued a reassuring statement expressing the hope that the Czech presidency would not be affected by the Republic's domestic difficulties. At the moment, however, Brussels – the Belgian capital and the city hosting the headquarters of the key institutes of European and Euro-Atlantic integration – has to handle a much more complicated situation. In the settings of the raging economic crisis, governance problems in the country presiding over the EU are a major headache to Europe and a considerable threat to the stability of Euro. What the EU needs these days is not openness to compromise and likewise political skills but the ability to ruthlessly implement unpopular austerity measures. In the case of Belgium, the policy would automatically widen the gaps in the already divided country, and any further strengthening of centrifugal tendencies in Belgium would certainly put the ideals of the united Europe in jeopardy.

Euro-optimists do contend that by the Treaty of Lisbon the rotating EU presidency is largely a formality while the key role belongs to the President of the Council of the EU. Ironically, till May, 2012 the latter post will be held by a Belgian - Yves Leterme's predecessor as Belgium's Prime Minister Herman van Rompuy, who, moreover, used to represent the Christian Democratic and Flemish parties at that phase of his political career. A Belgian politician speaking on conditions of anonymity remarked that van Rompuy as Belgium's former Prime Minister can enhance the country's visibility on the EU level. Simply speaking, in the coming several months the EU institutes will likely be hostages to Belgium's domestic political strife [3].

There is yet another cause for pessimism concerning Belgium's EU presidency. Last February and March, Belgium was shocked by massive rallies staged by Albanian refugees and various illegal migrants demanding financial assistance, housing, and jobs. In response, Yves Leterme's government directed biting criticism at the Balkan governments for their inability to shield the EU from the tide of asylum seekers. In a letter to European Commissioner for Home Affairs Cecilia Malmström, Yves Leterme linked the problem to the December 19, 2009 travel liberalization extended to a number of Balkan countries, thus calling into question nearly the main EU achievement in dealing with the Balkan region. He wrote that the inflow of migrants bred major material embarrassment, overburdened Belgium's infrastructures for hosting asylum seekers, and was tentatively attributable to organized criminal groups. Yves Leterme asked the European Commission to make pertinent decisions and to help limit the negative impact of travel liberalization [4].

Across the Balkans, Yves Leterme's reaction was seen as an attempt to reverse the EU decision on visa-free travel for the Balkan countries if not to freeze their Eurointegration. The scandal was eventually defused, but the triumph of nationalists in the June elections in Belgium can revive opposition to the Albanian – and generally the Balkan – threat to the EU. Actually, Yves Leterme's reference to the alleged involvement of organized criminal groups in trafficking Albanians en masse from Kosovo and other Balkan regions may reflect a drift in the European public opinion with regard to the Albanian theme. Belgium was among main proponents of the Albanian separatism in 2006-2008, but the position can be seen in a totally different light given the current separatist tendencies in Flanders.

As a result, one of the stated priorities of Belgium's EU presidency – helping the EU candidates prepare for the membership – sounds rather dubious. Radio France Internationale quoted a Brussels politician – someone from the EU headquarters, not from the Belgian government, evidently – as saying: “It is an absurd idea that this country can act as the leader of Europe. I think Belgium should have refused to preside over the EU. It does not do so, but it is going to be preoccupied with its domestic issues during the presidency” [5]. The forecast for the “united Europe” is dire.