Belgrade and Pristina: will a territorial exchange really happen? 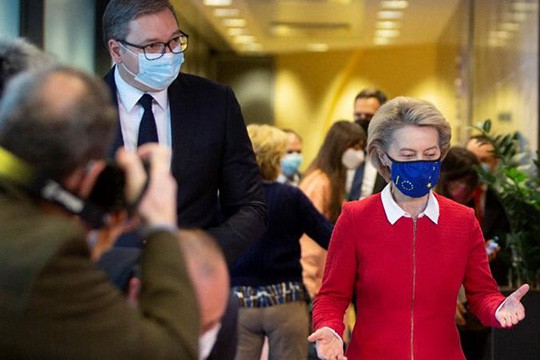 The European Union is dialing up pressure on Serbia and Kosovo in an effort to convince Belgrade and Pristina to sign an agreement on normalizing bilateral relations. This would allow Brussels to seize the initiative in the Balkans from the United States, which has previously managed to get the two sides clinch a similar deal on trade and other economic issues. Moreover, the EU is even ready to break from its previous policy and give a nod to a territorial exchange between Serbs and Albanians, which was categorically rejected, above all by Germany. However, while the Serbian leadership largely welcomes the idea, the Kosovo Albanians’ radically-minded leaders rule out any territorial concessions to Belgrade, thus deepening the Kosovo impasse.

Albin Kurti, the leader of the radical Vetëvendosje ("Self-Determination") movement, who has regained the Kosovo premiership, categorically rejected the idea of any territorial exchange with Serbia, proposed by the EU’s High Representative for International Affairs Josep Borrell.

"I do not think that we should give anything away." ... “This is pressure from Serbia. They want us to give in,” Kurti said. [1]

That being said, the former Kosovo president, Hashim Thaci, actively lobbied the idea of ​​a territorial exchange, even more than others. Back in August 2018, he and his Serbian counterpart Aleksandar Vucic reached a preliminary agreement on this when meeting on the sidelines of the European Forum in Alpbach, Austria. Thaci and Vucic voiced their intention to double down on signing a comprehensive deal, and invited the EU to act as its mediator and guarantor.

“We have a small window of opportunity,” Hashim Thaci said at the time. The planned agreement was supposed to be inked in Brussels already in September 2018, with the participation of the EU leadership. However, the whole process immediately hit a snag due to disagreements over border delimitation and opposition protests in both Belgrade and Pristina.

According to the plan, devised by Hashim Thaci, the delimitation issues should be discussed as a "package" and provide for a complex exchange of territories, including both the Serbian-populated North Kosovo communities of Leposavic, Zvecan and Zubin Potok (roughly one-fifth of the territory of Kosovo), and the southern Serbian communities of Buyanovac, Presevo and, preferably, Medvedja, adjacent to Kosovo, populated mainly by ethnic Albanians. The Kosovar leader argued that a territorial exchange whereby regions with a majority Albanian population would end up in Kosovo, and those with a predominantly Serbian population - in Serbia, would help ease tensions between Belgrade and Pristina.

While President Aleksandar Vucic generally agrees to the partition of Kosovo with the return of control over the province’s northern regions to Belgrade, he is still against the idea of extending the "package" exchange to include the southern Serbian communities of the Presevo Valley.

There is no unity on this issue outside the Balkans too, with Germany and France initially rejecting the idea of territorial exchanges as such, arguing that this could fire up tensions in North Macedonia and Bosnia and Herzegovina.

“The territorial integrity of the Western Balkan states is already a hard fact and cannot be changed,” German Chancellor Angela Merkel said.

Austria has been foursquare behind the partition of Kosovo as a means of normalizing relations between Belgrade and Pristina.

“If Serbia and Kosovo agree on a border correction, the agreement will have our support,” Austrian Chancellor Sebastian Kurz said.

The EU’s Commissioner for Enlargement and Neighborhood Policy Johannes Hahn equally favored the upcoming agreement. He urged his EU colleagues not to obstruct the deal between Pristina and Belgrade, even if it involves changing borders. Such an agreement, if it is reached, will be a one-off affair though and “should not be used as an example for solving other problems,” Hahn said at the end of August 2018.

The US administration backed the upcoming deal, with President Trump’s national security advisor John Bolton going on record saying that “Our policy, the US policy, is that if the two parties can work it out between themselves and reach agreement, we don’t exclude territorial adjustments."

The agreement on the exchange of territories, drawn up in 2018 never came to fruition though. Responsibility for this failure lies with radical nationalist forces in both Belgrade and Pristina, not interested in any compromise solutions that won’t sit well with their own political intentions. While Serbian President Aleksandar Vucic is still in power and has not changed his position, Vjos Osmani, who replaced Hashim Thaci as President of Kosovo, is less inclined to accept any compromises with Belgrade.

This situation adds to EU and US headaches with Barack Obama's de facto foreign policy team, now back in power in Washington, being eager to strengthen the position of the United States in the Balkans through more active military and political activity and pressure (not trade and economic scenarios and proposals, as was the case under Donald Trump). The EU and the US now have two options to choose from – either to ramp up pressure on Serbia in order to force it to recognize Kosovo without any territorial exchanges (which is more to the Joe Biden administration’s liking), or to convince the Kosovar leaders to accept territorial compromises (more preferred by the EU).

And here we should not forget about the Bosnian factor, since any changes to the status and borders of Kosovo will inevitably reflect on the domestic  political situation in Bosnia and Herzegovina and, in particular, on the position of the Bosnian Serbs. When briefing reporters a few days ago, the chairman of the Presidium of Bosnia and Herzegovina, Milorad Dodik, said that in any case he would insist on the implementation of the concept of "peaceful divergence," that is, the disintegration of the country, which, according to him, is already happening. He stated that the integrity of Bosnia and Herzegovina cannot be maintained, and this is something that has increasingly been discussed by the international community.

"We are waiting for the moment when a peaceful gap becomes real," Milorad Dodik noted, adding that he was not a warmonger and was only offering a way out of the current situation, which he described as unstable.

The EU too appears ready to "reformat" Bosnia and Herzegovina. When, during a visit to Sarajevo in early March of this year, Slovenian President Borut Pahor informally asked members of that country’s collective leadership whether a "peaceful divergence" was a possibility. Bosnian Muslim Shefik Jaferovic and Croat Zeljko Komšić responded that this was impossible, while Milorad Dodik, for his part, said that it was a likely scenario. [2]

The current situation of “unstable equilibrium” around Kosovo and Bosnia and Herzegovina is serious enough to prod all the disputing parties to more actively seek Russia’s mediation. Serbia and Republika Srpska maintain partner relations with Moscow. Meanwhile, the disagreements between the EU and the United States could make the other participants in the discussions more accommodating, including the Kosovar Albanians, who are interested in normalizing relations with Belgrade and implementing large-scale regional projects.