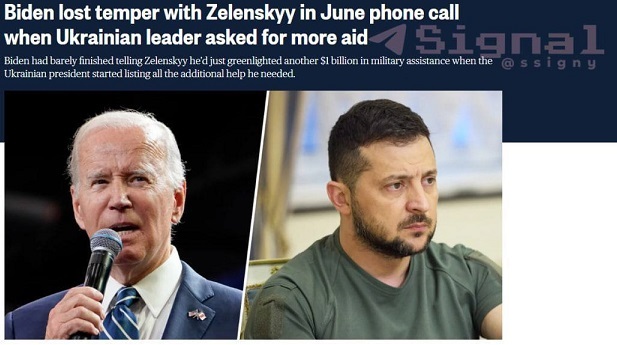 President Joe Biden and Ukrainian President Volodymyr Zelenskyy speak by phone whenever the U.S. announces a new package of military assistance for Kyiv. But a phone call between the two leaders played out differently from previous ones, according to four people familiar with the call.

Biden had barely finished telling Zelenskyy ‘he’d just greenlighted another $1 billion in U.S. military assistance for Ukraine’ when Zelenskyy started listing all the additional help he needed and wasn’t getting.

Biden lost his temper, the people familiar with the call said. The American people were being quite generous, and his administration and the U.S. military were working hard to help Ukraine, he said, raising his voice, and Zelenskyy could show a little more gratitude.

The clash reflects Biden’s early awareness that both congressional and public support for sending billions of dollars to Ukraine could begin to fade. That moment has arrived just as the president prepares to ask Congress to greenlight even more money for Ukraine.

The White House hasn’t specified an amount publicly. Lawmakers and Ukraine lobbyists hope for $40 billion to $60 billion, and some officials familiar with the discussions expect the number to be roughly $50 billion.

The proportion of Americans who are extremely or very concerned about Ukraine’s losing the war has dropped by 17 percentage points since May, from 55% to 38%, according to a Pew Research Center survey conducted last month. And the proportion of Americans who say they’re ‘not too concerned’ or ‘not at all concerned’ about Russia’s winning was up from 16% to 26%, according to the survey.

The shifting dynamics on Capitol Hill also could force Zelenskyy’s team to rethink how it engages with Washington, as it has often tried to leverage its support in Congress to get more out of the White House, suggests NBC News.