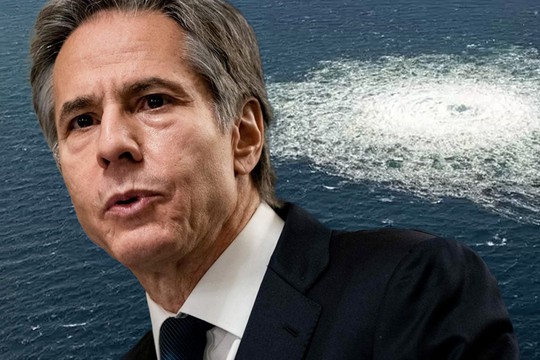 Ever since the recent unprecedented sabotage attacks on the Russia to Europe Nord Stream pipelines, the central question has continued to remain who did it and correspondingly cui bono? – writes Zerohedge.

Just when speculation and an avalanche of theories have inundated the web on an array of international outlets, the Biden administration has bluntly (and apparently lacking self-awareness) boasted that the pipeline bombings present an "opportunity".

Secretary of State Antony Blinken said in a joint press briefing with Canada's top diplomat that the damage and disruption to the pipelines are being seen in Washington as a "tremendous opportunity" to greatly reduce European energy imports on Russia: “Europe itself has taken very significant steps to both decrease demand but also look at ways to pursue the transition to renewables at the same time. And ultimately this is also a tremendous opportunity. It’s a tremendous opportunity to once and for all remove the dependence on Russian energy and thus to take away from Vladimir Putin the weaponization of energy as a means of advancing his imperial designs.”

Canada's Joly for her part pointed the finger at Russia for sabotaging its own pipeline during a panel discussion the same day, telling an Atlantic Council conference that the world is "not naïve" about who is responsible for the acts of "sabotage".

On the other side of the question of culprits and the crucial cui bono question, “The American Conservative” offers the following commentary: “One could certainly see why sabotaging Nord Stream benefits the US. We didn't want Europe to get Nord Stream in the first place, because it would make Europe dependent on Russian gas. This is perfectly reasonable, from an American point of view. However, if Washington sabotaged those pipelines in the middle of the Ukraine-Russia war, that would mean an insane escalation of the war, to sabotaging critical infrastructure.”

Think about it: if Russia can't deliver gas to Europe anyway, because the pipelines are too damaged, that makes it harder to make peace and restore energy flow to Europe. This fits Washington's policy goals. That doesn't mean Washington is responsible for this sabotage, but there's a lot more reason for Washington to have blown the pipelines up than for Russia.

Finally, we note that China state-affiliated media mouthpiece could not resist commenting on Blinken's apparently cluelessly ironic comments, saying what much of the rest-of-the-world is perhaps thinking: “Taking the sabotage of Nord Stream pipelines as a "tremendous opportunity" is such undisguised comment, isn't it? Isn't Mr. Blinken worried that his remarks will make the world believe "whoever benefits did it"?” – pic.twitter.com/X8NwAX75w2.