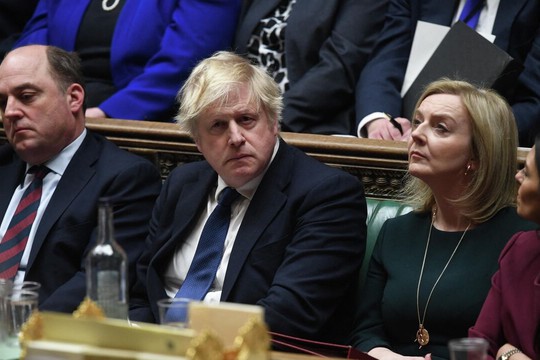 Three people – Prime Minister Boris Johnson, Foreign Minister Liz Truss and Defense Minister Ben Wallace have all sought in the war in Ukraine a boost to their political fortunes writes Bloomberg in an article “Ukraine Should Beware of Brits Bearing Gifts”. Bloomberg stresses that tory leaders looking to bolster their political fortunes could be making a negotiated end to the war harder to reach.

Almost unnoticed by world, the path to a ceasefire is being complicated by some long-distance belligerents: three top members of the United Kingdom’s government, writes Bloomber.

Prime Minister Boris Johnson, Foreign Minister Liz Truss and Defense Minister Ben Wallace have all sought in the war in Ukraine a boost to their political fortunes. For Johnson, Ukraine came at just the right moment. In late February, he faced the worse crisis of his premiership in “partygate.” Fellow Tories were turning against him over revelations of illegal revels at No. 10 Downing Street that Johnson attended, breaking laws that his own government had imposed at the height of the pandemic.

Johnson rushed to send lethal aid to Ukraine — one of the first world leaders to do so. He then became the first western European leader to address Ukraine’s parliament.

The problem is that Johnson is effectively stoking a war in which the UK is not a combatant. Instead, Ukrainians are fighting and dying, and their country is being devastated and depopulated.

Truss and Wallace — his two most likely Johnson’s successors — have decided that rhetoric even more bellicose than Johnson’s will also advance their careers.

Truss, who has posted Instagram pictures of herself on a tank, started off her war campaign by saying that she would support Britons going to Ukraine to join the fight against the Russians — a proposal met with scorn by her own party members and finally dismissed by the UK military. She now insists that Russia should be pushed out of Crimea as well.

Certainly, Truss has to get better at geography before she makes a success of geopolitics. She recently said that Britain will support “our Baltic allies across the Black Sea,” conflating bodies of water separated by 700 miles. Earlier this year, in a hostile meeting with her Russian counterpart, Truss asserted that the UK would never recognize the Russian territories of Rostov and Voronezh. The British ambassador to Russia had to intervene and gently inform his boss of her blunder.

Even as it accepts essential aid from them, Ukraine needs to be on guard against British friends such as these.