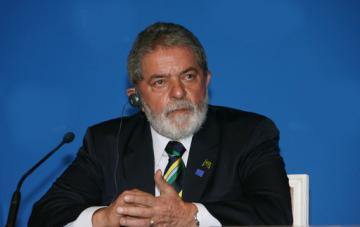 On October 3 the presidential election will be held in Brazil. The current president Luiz Inácio Lula da Silva is completing his second presidential term with an unusually high rating: 81.4%. After the fall of the military dictatorship in 1985 no other Brazilian president could boast such popularity.

The main achievement of Lula’s presidency is a significant increase of the living standard in Brazil. During his two terms 14 million working places have been created in the country, saving about 20 million Brazil people from poverty. The government launched a housing construction program and a loan program for people with low-income so they could buy housings. The housing contraction program worth $3 billion resulted in the construction of one million dwellings.

The housing program was led by Dilma Rouseff, who was the chief of the presidential administration. Now she is running for presidency as a candidate of the ruling party. According to the polls it is likely that Lula’s successor will win already in the first round.

One of the first successful social programs of President Lula was "Fome Zero". When the program was launched about one third of the population in Brazil was underfed. Under his ruling the parliament almost unanimously (374 – “for” and 2 – “against”) decided to introduce the right for food in the national legislation alongside with the rights for labor, education, medical service and housing.

Lula has done a great deal to strengthen the country’s defense sector. The thing the Brazilian government was seriously concerned with was the emergence of the US Fourth Fleet the coasts of Latin America and the establishment of new US military bases in Columbia and the states of the Caribbean basin. Paraguay and Peru are housing “advanced defended posts” of the US Air Forces. Pentagon does not deny that these bases were created to “ensure strategic interests” of the US on the South American continent. The US’ militancy makes Brazil become less US-oriented in the defense sector and look for new exporters of weapons. For example Brazil signed agreements worth $12 billion with France’s Defense Ministry including a contract on buying 36 Rafale jet fighters.

Brazil has rich natural reserves which need protection. First of all it should protect its forests and water resources of Amazonia, as well as rich oil deposits in the Pacific shelf from the US’ encroachment. In terms of hydrocarbon reserves Brazil can compete with the leading oil nations.

Brazil’s oil and gas company “Petrobras”, in which the state is the main shareholder has the goal to export processed oil and oil products instead of crude oil. The government fosters the development of the national oil processing industry. According to Lula da Silva, all the incomes the state receives from the new oil deposits will be spent on the domestic needs - on education, science, technologies and different social programs.

As a politician Lula is “the man of compromises” by nature, who became known as the master of dialogue and conflict settlement. Both George Bush Junior and Barack Obama always made it clear that they considered him the only “full-weight” leader in Latin America, moreover - a global leader. The White House asked Lula to help with the Cuban problem in the Organization of American States, to “soften” the consequences of the coup d’états in Honduras and to convince the Iranian leader to accept the terms of the “global community”. Obama named Lula "the most popular politician in the world ".

Without spoiling his “partnership relations” with Washington, Lula managed to act independently too. He did not break the relations with Iraq, when the US started the war against Saddam Hussein. He initiated the creation of the Security Council of Latin America after the revival of the Fourth Fleet of the US. He sent Brazil’s ambassador to North Korea. Now Brazil is beginning to play more important role in a multilateral union, formed between Brazil, Russia, India and China (BRIC). According to Lula, “the joint activities of the BRIC countries play a fundamental role in the formation of the new world order”.

The “moderate political course” of Lula is inspiring for other Latin American leaders. Mauricio Funes, a representative of the left-wing National Liberation Front, who was elected as the president of El Salvador said Lula shows how a left-wing government can win poverty keeping the balance in macroeconomic. If Brazil managed to pull 23 million of its citizens out of poverty why El Salvador can’t do the same? According to Funes, the government of Lula da Silva is and example of the left government which knows how to calm down the market and not to make leaps into the empty space.

Lula’s relations with the national mass media deserve special attention. Many political analysts still wonder how this provincial trade union leader could become the president of such a big country in 2002 without having any support in mass media? The answer is simple: Lula chose the direct dialogue with people. He was in all regions of the country spoke at workers’ meetings in industrial centers and at farmers’ meetings in remote districts of the country. Though his speech was simple and not faultless it did not hamper him to win the audience because everything he said was to the point, clear and related to the concerns of the common people.

The law on mass media was adopted in the time of the military dictatorship gave advantage in the media to several conservative parties. During his first presidential term Lula came up with idea to create the Council on ethics in mass media but failed because of the opposition of the powerful conservative lobby. In 2007, Lula, confirmed that he was the main of compromises and appointed an official from O’ Globo (the largest and influential media holding) the Information minister.

Lula also decided to create the network of public mass media and in 2010 the government allocated $250 million from the state budget for this purpose. Promoting the new mass media law Lula stresses that this sphere should requires the new democratic order.

Of course, as Brazil’s President Lula was not successful in all his plans. The government’s attempt to carry out a social reform in the interests of the ruling class was stopped by the manifestation of the working class. Lula has not kept his promise to change a desperate situation of the landless farmers. These farmers are still fighting for their own land plots. It is understandable why the leaders of the landless farmers called the agreement on mutual production of bio fuel signed by Lula and George Bush Junior “the deal with the Devil”. Under that agreement the plough lands were to be used for the plantation of “raw materials for energy sector”.

The conflict with the workers of the “Flasko” factory also affected the popularity of Lula’s government. In summer 2003, the factory workers took the factory under their control. In summer 2009, the former owners of the factory with the support from the government tried to win back their property. The factory was cut off from electricity supply and the production was confiscated. The authorities threatened to put the management to jail. All this was made under an excuse of paying off old debts made by the former owners. It was the formers owners who ruined the production and did not pay salaries to the workers forcing then to take power at the factory.

“Flasko” is not the only company controlled by the workers which was troubled by the federal authorities. Similar incidents happened at “CIPLA” factory. INTEFIBRA” and tenths of other companies controlled by the workers do not feel Lula’s support. Radical left forces claim that Lula tied up the workers of those companies with the governmental bureaucracy by establishing trilateral commissions which comprised governmental officials, former owners and trade union officials.

On sufferance of Lula the authorities of Rio-de Janeiro started the construction if the “Berlin wall” , which fences out the poorest districts from the rest of the city. The excuse for it was the protection of the green areas of the city from illegal building construction. It is not a secret that the deficit of housing leads to the growth of illegal construction. In recent years half of 750 favels (poor suburbs) have doubled their areas. This fact shows that there is nothing left in Lula’s policy. Canadian economist Michel Chossudovsky characterized Lula’s policy as “neo-liberalism with a human face”.

Nevertheless, this “relatively balanced” ruling of the left forces was highly appreciated by the people. The right forces did not even try to promote their candidates for the coming election counting on a Social Democrat representative Jose Serru. Ecologist Marina Silva, who comes third in the rating is a member of the ruling Workers’ party and stays true to left electorate.

During Lula’s two terms thanks to the more fair distribution of national income the middle class in Brazil has grown up to 30 million people. This class is the main support of Lula’s government and in near future it will be the main support for Dilma Rouseff. Lula who should leave the presidential palace in January 1, 2011 won’t leave politics. “The fight for a better life of the working people is not over yet”, - he says. That is why it is not excluded that by 2013 Lula will run for presidency again.