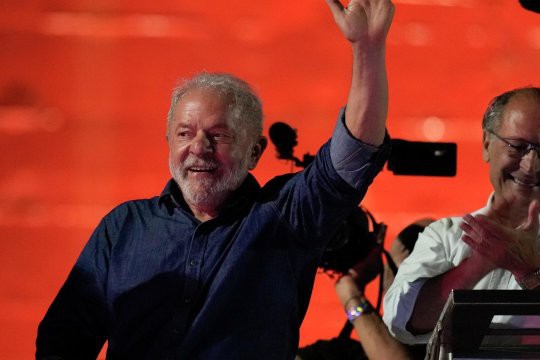 On October 30, Brazil held the second and final round of general elections to pick up the country's president and vice president, as well as members of the National Congress, governors, deputy governors and members of all state legislatures. According to the outcome of the October 30 vote, the incumbent president, Jair Bolsonaro, secured the support of 49.1 percent of the votes cast, while his opponent, the co-founder and honorary chairperson of the Partido dos Trabalhadores Socialist Workers' Party, Lula da Silva, garnered 50.9 percent, becoming Brazil’s 39th president. The tiny edge that Lula da Silva gained over his rival in the runoff vote reflects a deep split in Brazilian society, even though the new head of state has promised to be the  leader of the entire nation.

What actually happened on October 30, when the left-wing challenger Lula da Silva, though by a slim margin, still managed to defeat the far-right incumbent Jair Bolsonaro?

Secondly, it is worth noting the Brazilian voters’ strong polarization along political lines. As of October 2022, of the 146 million voters, 118.5 million or 80.8 percent took part in this year’s campaign to elect members of various levels of state government and legislatures, which reflects a high level of political activity in the country.

Thirdly, Lula da Silva stepped down in 2011 with an approval rating of a whopping 90 percent - an all-time national record. As president, da Silva led Brazil through serious upheavals: runaway inflation, high unemployment, especially among the young; funded educational programs and lifted millions out of poverty. Moreover, he takes credit for ensuring tight financial policy by the government, control over inflation and attracting foreign investments into the country.

In addition, his government implemented a range of social programs, including the so-called Bolsa Família (Family Package), which provided 12 million poorest families with small monthly allowances on the condition that their children attended school regularly and received the necessary  vaccinations.

According to experts from the Brazilian J. Vargas Foundation for Public Opinion and Social Research, during Lula da Silva’s presidency, the level of poverty in the country dropped. However, there was also a flurry of political and corruption scandals, including monthly payments to small party MPs in the government coalition, purchases of ambulances at inflated prices, illegal financing of election campaigns through offshore accounts, etc.

In an interview with CNN, Bruna Santos, senior adviser at the Wilson Institute Brazil Center, said that President da Silva was embroiled in the biggest corruption investigation dubbed "The Car Wash," which led to the indictment of hundreds of high-profile politicians and businessmen across Latin America. In 2017, the ex-president was convicted of corruption and money laundering, but in March 2021, the court overturned the ruling, thus clearing the way for his political rehabilitation. The Brazilians aptly called the court’s decision as "a turnaround worthy of their favorite Brazilian telenovela."

The main question that Brazilians are now asking is what the newly elected president is going to do.

It can be assumed that first, he will stick to his election promises, using the experience and proven methods of his past experience as president from   2003 to 2011.

Second, according to local analysts, da Silva could focus on living up to his campaign promises to improve the welfare of Brazilians based on past achievements, as his current political agenda is skimpier than it was 11 years ago. The president-elect plans to put the state back into the center of economic policy, promising the introduction of a new tax regime and effective measures to combat hunger, which returned to the country during Bolsonaro’s presidency.

Thirdly, the political situation in the country following the October 30 vote is very difficult and way more alarming than it was 11 years ago. Now, having enlisted the support of more than 60.4 million Brazilians, Lula da Silva openly says that the people of Brazil are fed up with the atmosphere of uncertainty, and are seriously worried about what the provocative activities of ex-president Bolsonaro may lead to before he takes office in January.  Therefore, with the year 2023 still two months away, anything can happen. Therefore, the president-elect believes that people should be ready for this.

In light of all this, it looks like there is another serious problem that Lula da Silva may face, with the National Congress of Brazil (Congresso Nacional do Brasil) generally hostile to the new president. The state legislature is bicameral and consists of the upper house - the federal Senate (81 seats) and the lower house - the Chamber of Deputies (513 seats). As a result of the parliamentary elections held in October of this year, Bolsonaro's allies secured a majority in the lower house, as well as control of the Senate.

An analysis based on expert assessments allows us to answer three key questions: why did Bolsanaro lose? Did he lose to da Silva? If he did, then why?

Assessing the election results, analysts point to the minimal gap between the incumbent president and the ex-president. Indeed, the 1.8 percent separating the winner and the loser in the recent election campaign is certainly negligible and is nothing short of a “technical error.”

That being said, Bolsonaro did lose out to da Silva – no doubt about that, since modern electoral technologies include the so-called “administrative resource,” meaning that any leader, let alone the country’s president, usually has at least a 20 percent head start over the opponents. These are voting clerks and office managers associated with the government, heads and employees of municipalities, state governors, members of the government – in a word, people dependent on the powers-that-be.

According to Brazilian experts, the reasons for Bolsonaro's loss stem from his hastily tailored pre-election program, and to a large extent, from his performance as president during the past four years. While campaigning as an incumbent, he made a strategic error by banking on the fight against corruption. Naturally enough, the voters wondered why he hadn’t done anything in this respect during his previous four years in office. The COVID-19 pandemic that killed more than 680,000 Brazilians did not add to its popularity either. Moreover, Bolsonaro's government has reportedly  provided significant financial support to foreign land exploitation businesses in the Amazon, resulting in record deforestation. His program of support for domestic businesses and his promises to increase mining, privatize state-owned companies and produce cheaper electricity to drive down energy prices alienated millions of voters across the nation. Even his pledge to continue paying a monthly allowance of 600 reals (around $110) for low-income households did not help. As a result, the people dubbed him "tropical Trump," referring to all his unfulfilled promises.

Analyzing the results of the past presidential elections, experts are now trying to figure out the main problems that the newly elected President Lulu da Silva will face. The experts I interviewed assess the situation as fairly complex and uncertain, primarily in view of the fact that da Silva is already 77, that in October 2011 he was diagnosed with cancer of the larynx and underwent radiation therapy. True, in March 2012 he announced his recovery and return to politics, but some analysts are not sure that his health condition will allow him to effectively run the country’s affairs during the next four years.

At the same time, many US analysts are confident that the Brazilian left wingers’ hostility towards the United States, which actually provoked all political upheavals in the country since the 1960s, will inevitably impact bilateral relations in the coming years. They will hardly forget "who threw them in jail for decades.” They are very likely to remind the Americans that  the CIA and the FBI had a hand in devising and carrying out in Brazil dozens of operations as a result of which almost all the leading left-minded politicians wound up in jail. By the way, da Silva himself did not participate in the previous presidential elections only because he was unlawfully jailed  with the help of US intelligence agencies.

President Biden called the voting in this year’s Brazilian elections free and fair and acknowledged the victory of da Silva, expressing hope for good cooperation with the new president. However, according to US experts, the mere fact that the White House "positively assessed" the presidential elections in Brazil, means absolutely nothing.

As for the state of Russian-Brazilian relations in the coming years, since the majority of Brazilians believe that Russia remains a country that has implemented the concept of a social state, chances are high that relations between the two countries will receive a new boost. What is also important here is that along with Russia, China, India and South Africa, Brazil is part of the BRICS. Describing the state of Russian-Brazilian relations, President Vladimir Putin said at a meeting of the Valdai Club on October 27, that Russia does not interfere in the internal political processes in Brazil, which he considers Russia’s most important partner in Latin America, adding that Moscow will make every effort to make sure that these relations continue to develop in the future. Immediately after the announcement of the results of the second round of elections in Brazil, Vladimir Putin congratulated Lula da Silva on his victory.