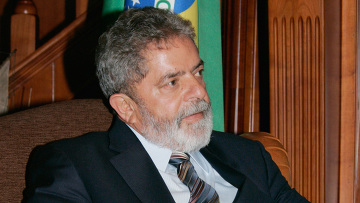 Brazil is central to the Kremlin`s politics of increasing assertiveness in Latin America. From this standpoint Brazilian President Luiz Inácio Lula da Silva who plans to visit Moscow on May 13-14 — a pragmatic and predictable leader remaining a patriot of his own country despite the onslaught of globalization — is an almost ideal partner.

Luiz Inácio Lula da Silva established himself in international politics in the epoch of neocon dominance. Washington used both praise (Lula, though a socialist, is a trustworthy figure different from the populists, he guarantees stability in Latin America) and thinly veiled threats (the «dictatorial» Chavez hopes to sideline Lula in Latin American politics) to ensure the loyalty of the Brazilian leader. When it became clear that Lula was not going to side with the US in its struggle against the «populist» regimes in Latin America, attempts were made to smear him. His closest associates were confronted with allegations of corruption, but the attacks failed to shatter Lula`s popularity. During his second term as the President of Brazil, Lula enjoys the support rating of 70%-80%, which is a remarkable result.

Obama`s Administration switched to a much gentler tactic in dealing with Lula than what he had to face under G. Bush. These days Washington is stressing that the epoch of neocons is over and the relations between the US and Brazil should play the key role in propelling the entire Western Hemisphere to prosperity. Occasionally the US is making nice gestures towards Brazil such as the recent pledge to buy 200 Brazilian Embraer Super Tucano turboprop aircrafts (on the part of the US, the actual motivation behind the deal may be that the aircrafts will otherwise be sold to Venezuela).

When Brazil and the US signed a military cooperation agreement, the routine document in no way infringing upon Brazil`s sovereignty was touted as the Pentagon`s major success in creating a network of US military bases in Latin America. Other Latin American countries were explainably concerned that Brazil would host a US naval base, but it transpired shortly that no «secret addenda» were linked to the agreement, and that its scope was essentially limited to consultations and information swapping. The notion that the US-Brazilian military deal had a wider meaning was traced back to US Ambassador to Columbia William R. Brownfield who evidently hoped to induce a conflict between Lula and Chavez. Such is the ordinary craft of information warfare.

Brazil as a rising and increasingly influential country is bound to be viewed with jealousy if not downright hostility by the «global superpower». The US establishment is still undecided about how to treat Brazil, while the urgency of the question is obvious. So far Washington is relying on its time-tested strategy, strengthening its military presence along the country`s perimeter. The US maintains military bases in Columbia, Peru, Paraguay, Suriname, some of the Caribbean island countries. The US Fourth Navy is on patrol in the proximity of Brazil`s shelf holding vast oil reserves comparable in size to those contained in the Orinoco Oil Sands.

Brazil is the target of intensifying US surveillance and intelligence activity employing the most advanced equipment and an expanding spy network. Oftentimes the US measures ostensibly meant to fight «radicalism» and «populism» in other countries are actually oriented towards Brazil. Washington is keenly interested in Amazonia, which is the Western Hemisphere`s reservoir of water and biological resources. The scenarios of direct US interference in Brazil`s domestic affairs are based on the concept of the protection of Amazonia with its rainforests and water reserves from ecocide.

The US chances of geopolitical control over the Latin American giant have been shrinking year by year as Brazil is entering the final phase of its evolution into a global center of power. Due to the fact, the country is more than ever interested in cultivating its partnership with Russia, as President Luiz Inácio Lula da Silva has stated a number of times. Russia and Brazil should consider joint initiatives in such spheres as nuclear energy, aerospace industry, energy, and nanotechnologies. There are promising ideas concerning the military-technical cooperation that await a more practical approach. Recently Lula has talked often about building up Brazil`s defense potential which it needs to safeguard its 23,000 km border, oil fields, and rainforests.

No doubt, Lula and Russian President D. Medvedev will have a lot to discuss when the Brazilian President visits Moscow on May 13-14, and the negotiations can be expected to produce serious results.