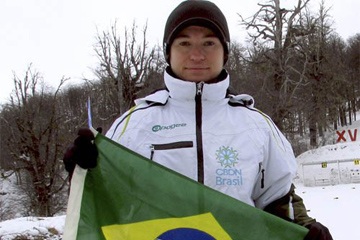 What sports do we associate with the giant tropical nation of Brazil? In first place, of course, is football. Also volleyball, basketball, Formula 1 and other types of racing. Also beach volleyball and beach football, mini-football, futsal, martial arts, wrestling, capoeira, Brazilian Jiu-Jitsu and mixed styles....

And, yet, "tropical" Brazilian athletes will try anything to get to the 2014 Winter Olympics in Sochi. This was stated by the head of the National Confederation of winter sports in Brazil (they actually have one!) Stefano Arnhold. According to him, his countrymen have considerably advanced technically compared with Turin in 2006, and by 2014, are hoping to further improve their results. In Vancouver in 2010, five Brazilians already showed good form, and despite the lack of medals, successfully qualified for the Games, which can be considered to be an excellent result. Why? Because the sportsmen from hot tropical Brazil have had to overcome the most difficult obstacle - nature. In a country where it never snows, there are no conditions for winter sports. Still, athletes from the Tropical giant seek to fly across the ocean to participate in the Sochi Olympics.

The most preferred winter sports for Brazilians today are the biathlon, skiing and snowboarding. The country even has its own star - Mirlene Picin. Her countrymen call her "Miss Exotica". For Brazil she really is exotic.

In an interview, she told reporters: "I was a fan of roller skates (aggressive and fast.) In 2005 and 2006, I competed a lot, but they are not Olympic disciplines, and I began to look for more opportunities to train and compete, and to develop myself as an athlete. I once saw on the Internet that it is possible to train for skiing using roller skis, and I decided to try. It was only after I began to intensively train in roller skiing, that the Brazilian Federation of Winter Sport invited me to try my hand in the biathlon. That was in 2008. And very soon I fell in love with the sport, which previously I did not know about. "

In August 2009, "Miss Exotica" spent a month training in Portillo, Chile. She began to make progress. In the same year she won her first race in the South America championship, and it helped her to believe in herself and continue to work hard.

It should be mentioned that in South America, only 3 countries take part in the biathlon. They are Brazil, Chile, and Argentina. The Brazilian Federation of Winter Sports has done extensive work in the development of the biathlon, and is ahead of Chile and Argentina, although the latter have an advantage: they have snow. Brazil promotes the sport among the youth and its athletes believe that in the next year or two more Brazilians will take part in Europe. Here the Biathlon is not as popular as in the Old World. However in South America, the view in regard to winter sports is changing.

Oddly enough, in a tropical country, which never has snow, a lot of people are already interested in snowboarding, skiing, cross-country skiing and biathlon, and people travel the world to participate in winter sports.

Will Mirlene Picin take part in the biathlon at the 2014 Olympics in Sochi? Of course, yes!

"Of course, I want to go to Sochi, but it's a pretty hard mission for me, she said.  I will have a chance to participate, perhaps in skiing. I still need to think carefully and decide ...”

What does participating in the biathlon mean to her?

"It gives me creative ideas, it is a beautiful sport, alive and dynamic, “said Mirlene with conviction. “Traveling across the seas and oceans for competition gives me a chance to learn about different countries, languages, and see unfamiliar things. The world is like a big laboratory for people who work with information and design (her main occupation other than sport). There is a wealth of experience that can be used not only in professional life, but in life in general. Also the biathlon gives me new friends and knowledge, and my plans for the future are to continue to work in improving in biathlon ...”

In addition to "Miss Exotica" in Brazil, there are other athletes who are preparing to perform at the Olympic Games in Sochi. For example, Leandro Ribela. He skis in the 15 kilometers cross-country event. Maya Harrisson and Johnatan Longhi compete in the slalom and giant slalom. Brazil also has snowboarders. I was told that they have found an original site for training. The scorching rays of the sun are not an obstacle for them! Snowboarding competitions even take place in Rio de Janeiro. A track was made directly on one of the central beach resorts. A 52-meter slope was especially built for this event on the promenade, and covered with tons of artificial snow. Brazilian athletes are happy to use the opportunity to ride on their boards without going abroad, as Rio residents and visitors can appreciate snowboarding tricks, whilst still lying on a warm beach...

In the coming years, Russia and Brazil are hosting major sporting events: the Olympics and the football World Cup. Our countries have agreed to establish the closest possible cooperation including exchange of experience, specialist training, security and logistics. Russia can help Brazilians better learn a range of winter sports, and our "tropical" friends can clearly demonstrate master classes in football. This, by the way, is what they have been doing for a long time here in Russia.

In recent years, mainly Brazilian footballers have helped Russian teams to play entertaining football and to win both within Russia and abroad. Suffice it to mention at least the “Zenith St Petersburg" striker the Hulk, or Wagner Love, one of the finest individual footballers who has once again returned to CSKA. Of course, the Brazilians are not only in love with Russia, but generously paid. They and their other talented compatriots delight our fans. Although I personally admire the Brazilians, and still think that this orgy of legionaries can only improve our players, and not as erroneously believed by some, to push Russia to the back in team sports, and in football in particular.

By the way, many of our sports experts agree. Although, of course, sharing experience in coaching and playing the games is very useful. But it must be done appropriately and integrated with other organizational measures. I would also like to see Russian football develop...

I remember that Brazilian President Dilma Rousseff told reporters during her recent visit to Russia: "We hope that one day we will meet Russia in the final of the football championship, or even in the semifinals. You see, our ministers are closely watching the details of an event such as football, especially when it affects Brazil.”

“What is most interesting is not what happens during the game, but before the game. One of our most famous coaches, Vicente Feola said once to our famous footballer Garrincha, "You can move to the right, to the left, with the ball or without the ball - and you are still going to score a goal." It was a match against Russia. And you know what Garrincha said: "Mr. Coach, you're too confident when it comes to the Russians, I am not so sure about the Russians ..."

...Once, to be exact on May 17th, 2011, Vladimir Putin at a meeting of the Russian-Brazilian High Commission for Co-operation, said: "Brazil and Russia will host in the coming years, major international sporting events. We are in 2014, and it is known we will host the Winter Olympic Games in Sochi, and in Brazil in 2016, Rio de Janeiro will host the Summer Olympic Games. Brazil will hold the Football World Cup in 2014 and Russia in 2018. We agreed that we will share useful information and help each other in the organization of major international events. "

These words of Vladimir Putin were confirmed in talks with Brazilian President Dilma Rousseff in Moscow in December last year. It seems like this will be discussed with the leadership of the Tropical giant by Russian Prime Minister Dmitry Medvedev during his visit to Brazil in February 2013. The main thing is that the strategic partnership between our two countries is developing positively. In sport in particular. So Brazilian athletes will definitely be going to the Winter Olympics in Sochi.