«BRICS. World of Traditions» holds the presentation of the multilateral Project of Truth about the Second World War 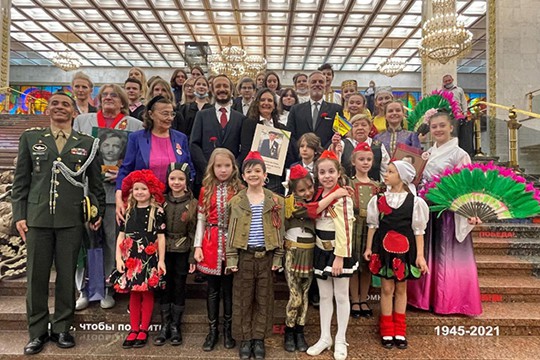 On the commemoration of the celebration of the 75th anniversary of Victory in the Great Patriotic War of 1941-1945, the Second World War and the war against Japanese militarism the Regional public organization «BRICS. World of traditions» implemented the multilateral Historical and Literary Project «Peoples of BRICS. Dedicated to the War Heroes» (hereinafter – Project) in 2020.

The peoples of all BRICS countries, i.e. Brazil, Russia, India, China and South Africa, took part in the Second World War within the anti-Hitler coalition. The Jubilee Project is aimed at bringing people together on the basis of universal memory of war events, historical truth and respect for their heroes and serves to form the moral culture of the younger generation in the BRICS countries, prevent manifestations of nationalism and extremism in the youth environment, foster a deep respect for the history of their country and other states of the «Five» among children and adolescents.

The presentation of the Project of truth devoted to the events and heroes of the World War II was held on May 12, 2021 in the Hall of Fame of the Central Victory Museum. The Project of the truth solidarity of the BRICS peoples on the battlefields. The Project of truth about the great role of the Soviet people in the Victory over fascism and Japanese militarism.

People get this truth from historical and literary sources in the form of documentaries and books from authors based in the five countries. One of this films, «Unknown Stalingrad», filmed by the BRICS TV channel, was demonstrated before the start of the celebration.

The books revealing the true events that were presented at the exhibition on that day had been collected in the difficult year of 2020, in masks and gloves, literally, on the field, bit by bit.

A memorable part of the Presentation was an exhibition of truthful books by authors from the five countries, as well as an art exhibition of paintings on the topic of the Project, made by talented students of the College of Design and Decorative Arts of the Stroganov Moscow State Academy of Arts and Industry, who perfectly decorated the exposition of the books exhibition.

The host of the event, the PhD student of RUDN University, Anita Dkhar, with solemn fanfare on the background, announced the start of the long-awaited presentation of the Project, which had been organized in difficult conditions within more than a year period.

After the solemn presentation of a copy of the Victory Flag by the cadets of school No. 1547, the author and head of the Project, President of the RPO “BRICS. World of Traditions" Lyudmila Sekacheva, noted when opening the presentation: "The project of truth has become a literary and educational platform to call for the world with an appeal for non-violent resolution of all international and internal conflicts, disputed territorial issues.

Great representatives of the BRICS peoples teach us this values: Confucius, Leo Tolstoy, Mahatma Gandhi, Nelson Mandela, Baron Rio Branco, who left their peaceful philosophical heritage to humanity as a moral instruction, a moral vaccine against the virus of violence reigning in the modern world."

Here the wise words of the Great Indian Teacher, the leader of the non-violent liberation from British rule, Mahatma Gandhi symbolically complete this idea: “Wherever there is a quarrel, no matter how opposed the opponent, conquer him only with love, as the law of love is stronger than any law of destruction ... An eye for an eye makes the whole world blind!"

Therefore, at the art exhibition guests could see wonderfully painted portraits of the Great Teachers of BRICS by students of the painting faculty of the College of Design and Decorative Arts of the Academy. S.G. Stroganov under the leadership of Olga Demidenko, specially prepared for the presentation. The artists presented their works to the Embassies of the BRICS countries to the Russian Federation during the ceremonial part of the presentation.

The event was organized by the RPO «BRICS. World of Traditions» (Moscow) and the International Union of Public Associations “Public Committee of War Veterans” (Moscow) represented by Vladimir Bednov. 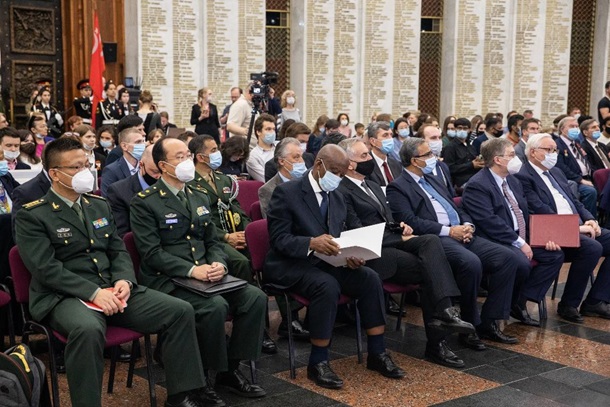 Deputy Minister of Foreign Affairs of the Russian Federation, Sherpa of Russia to BRICS Sergey Ryabkov, Ambassador-at-Large of the Ministry of Foreign Affairs of the Russian Federation, Sous-Sherpa of Russia to BRICS Pavel Knyazev, senior diplomats of the territorial Departments of the Ministry of Foreign Affairs of the Russian Federation, Ambassador of India to Russia Mr. D. B. Venkatesh Varma, Ambassador of Brazil to Russia Mr. Tovar da Silva Nunes, Ambassador of South Africa to Russia Mr. Mzuvukile Jeff Maketuka, Defense Attaché of the Embassy of China to Russia, Major General Kui Yanwei, military attaché of the embassies of Brazil and South Africa to Russia, Chairman of the Supreme Council of the International Union of Public Associations "Public Committee of War Veterans" Alexander Kovalev, deputy of the Moscow City Duma of the VI convocation, director of the Moscow State Budgetary Educational Institution "School No. 1409" Irina Ilyicheva, as well as the daughter of Leonid Mitrokhin, author of the book "Friends of the Soviet Union. Soviet-Indian Solidarity during the Great Patriotic War” - Olga Solodkova took part as the Honorary guests of the event.

The war veterans from Russia, teachers and students of MGIMO, Moscow State University, RUDN, partners of the Project became the guests of the meeting. 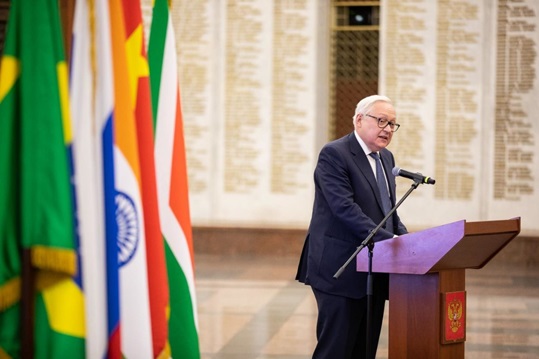 Opening the solemn part of the presentation, Sergei Ryabkov stressed that “BRICS countries are united not only by a common present, but also possess common plans for the future. They are united by history, our joint Victory over the common enemy." “Unfortunately, today we are witnessing incessant and growing attempts to falsify history, to denigrate the soldiers-liberators, to whitewash the Nazis and their accomplices. BRICS states are united in condemning these actions,” the Deputy Minister emphasized.

The Ambassadors of the BRICS member countries to Russia addressed the participants with words of gratitude to the organizers of the event and reaffirmed the invaluable role of the Soviet Union in the Victory over fascism and Japanese militarism. The Ambassadors touched upon the development of relations between the countries of association in various fields.

The Ambassador of the Republic of India to Russia Datla Bala Venkatesh Varma emphasized that “the Soviet Union has been India's closest partner for several decades. India develops a diversified cooperation with the USSR successor - Russia. In particular, we are very grateful for the Russian assistance during the most difficult period for us during the spread of the coronavirus pandemic."

Brazilian Ambassador to Russia Tovar da Silva Nunes spoke about the circumstances of his country when joining the anti-Hitler coalition, noting about the expeditionary corps, which fought in Italy from September 1944 to April 1945, contributing to the liberation of the country. The diplomat especially stressed that the Brazilian military was sharing food with the starving population of the liberated country, helping to overcome the difficulties of the war.

The Ambassador of the Republic of South Africa to Russia Mzuvukile Jeff Maketuka recently arrived in the Russian capital, but already visited Red Square as a guest of honor on the Victory in the Great Patriotic War celebration and was shocked by the scale of the parade. In his speech, the diplomat emphasized that modern Russia and South Africa have been linked by strategic partnership since 2013.

“We have been developing economic and cultural contacts for almost three decades since the establishment of diplomatic relations. Friendship is developing between our peoples, and we hope that this will help our countries reach new frontiers. Friendship, which contributes to the promotion of new high-quality results,"- concluded the South African Ambassador to Russia.

Defense Attaché of the Embassy of the Peoples` Republic of China to the Russian Federation, Major General Kui Yanwei recalled in his speech that 76 years ago, after 1418 days of stubborn struggle, the Soviet people won the Great Patriotic War, while the Chinese people on the eastern part of military operations were still fighting Japanese militarism.

«The Chinese people will always remember the contribution of the USSR and the peoples of other countries to the victory over the Japanese invaders», - said Kui Yanwei.

According to the Attaché, “the Damocles sword of war still hangs over humanity. In these conditions, BRICS countries and other states must jointly maintain the international order and the system of international relations based on the purposes and principles of the UN Charter".

Following the speeches, Ambassadors of BRICS countries received paintings and portraits of the Great Teachers of BRICS as a gift from young artists. The portrait of Mahatma Gandhi made by Nemo August was transferred to the Indian Embassy. The Brazilian Ambassador received the portrait of Baron de Rio Branco by Victoria Shevlyagina. Astakhov Makar presented his painting "Unification" - a portrait of Nelson Mandela, to the Ambassador of South Africa to Russia. Likhokon Varvara presented the portrait of Confucius to the China`s Embassy to Russia as a gift to the Defense Attaché at the Embassy of China.

Deputy of the Moscow City Duma of the VI convocation, director of school No. 1409 Irina Ilyicheva received a portrait of Leo Tolstoy with children from its author Mordalimova Adele as a token of gratitude for the implementation of the project "Leo Tolstoy and Mahatma Gandhi: a unique legacy" at the school.

Alexander Kovalev and Olga Solodkova also made a welcoming speech and received gifts from the organizers of the Presentation.

Oksana Voloshina, President of the «Territory of Success» Business Club, took part in the ceremony of portraits and gifts presenting during the solemn part of the Presentation.

The author of the Project expressed her gratitude to the Embassies of China and South Africa to Russia, Russian Embassy to India, the Russian Consulate General in Rio de Janeiro, Rossotrudnichestvo office in South Africa, and partners from India for assistance in obtaining books for the exhibition. 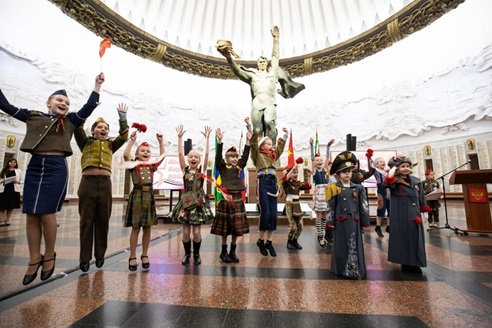 Participants and guests of the event watched an information video "Writers and Journalists of the BRICS Countries speak about the Second World War" by the BRICS TV channel and a video report about the "Immortal Regiment" action in Rio de Janeiro in 2019 presented by the Brazilian magazine "Revista Intertelas".

The performances of the pupils of the «Katyusha» Center of Aesthetics and Beauty led by the Honored Worker of Culture of Russia Zemfira Tsakhilova were greeted with delight. Young artists recited poetry, performed the touching and costumed dance composition "The grandchildren of Victory", and the wonderful dance suite "Friendship of peoples".

The "Minute of Silence" was followed by an exciting mini-march of the Heirs of Victory - the Children's March «Immortal Regiment» with the song "Cranes" on the background. The march was performed by the pupils of the "Katyusha" Center, cadets and a dance group of senior pupils from school No. 1409 wearing white clothes and holding candles; together with them a nine-year old Russian-Brazilian great-grandson of the war Dmitry Guadanin Galashin was standing with two portraits of his Russian and Brazilian grandfathers.

The Presentation ended with the song "Victory Day" performed by Alexander Rishko. Children, honor guests, all the celebration participants sang along, holding gifts, white paper cranes made by students of school No. 1409, bright flags "Children of War" provided by the ASKOM Company and red carnations.

The festive event and the entire Project itself demonstrated the friendship and solidarity between the peoples of the "five" at all times of history, the unity of government and public diplomacy aimed at strengthening our common home BRICS - a beacon of peace, mutual understanding, trust and harmony.