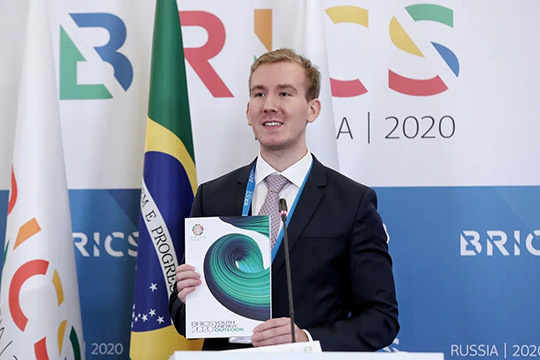 The event concluded the BRICS Energy Week that took place in Moscow under the Russian BRICS Chairmanship in 2020. The Summit was as usual supported by the Russian Ministry of Energy, the Federal Agency for Youth Affairs and the Federal Agency for the Commonwealth of Independent States Affairs, Compatriots Living Abroad, and International Humanitarian Cooperation, and has become the largest youth BRICS event devoted to energy.

The meeting brought together young scientists and experts from the BRICS countries, as well as representatives of ministries, energy companies and the leading BRICS universities.

During the opening ceremony, Anton Inyutsyn emphasized that BRICS unites the largest youth community in the world, and that in the not too distant future these young people will have to make vital decisions when it comes to international energy cooperation.

“In this regard, today we need to support initiatives of young people who are taking an active part in the development of energy cooperation and conducting energy research as well as creating innovative energy-related startups. The BRICS Youth Energy Agency and the Annual Summit are important initiatives that can make a significant contribution to the implementation of the energy agenda,” Anton Inyutsyn explained.

The key event of the Summit was the presentation of the third issue of the BRICS Youth Energy Outlook 2020. More than 180 young scientists from 40 universities and research organizations of the BRICS countries took part in the preparation of the document, which is a record in the history of the project. During the presentation, the best research teams presented the youth outlook on the development of the energy sector to the leading Russian and foreign experts, including representatives of Rosseti, the regional center of the Rosatom state corporation in the Central and South Africa, MGIMO University under the Russian Foreign Ministry, the Peoples' Friendship University of Russia, etc..

There meeting also comprised of a plenary discussion of the development of the youth energy cooperation within BRICS and joint plans for the upcoming year. The discussion participants spoke about new directions in development of youth cooperation within BRICS, including the creation of energy startups, joint research activities and the opening of representative offices of the BRICS Youth Energy Agency in the BRICS countries.

Andrey Kovalenko, the deputy head of the Department on implementation of youth programs and development of public diplomacy of Rossotrudnichestvo, told about the potential of interaction of young leaders at the sites of Russian centers of science and culture in the BRICS countries, about the program "New Generation" and other formats of work with young people.

"As for foreign colleagues from Brazil, India, China and South Africa, they can always contact the Russian centers of science and culture in their countries. Our representative offices may become for you a meeting place with your Russian colleagues and a point of entry into the Russian humanitarian space," - noted Kovalenko at the meeting.

The final event of the #FromBRICSwithSDG campaign on sustainable and smart cities concluded the Summit. The meeting participants presented a new initiative on involving young people in the BRICS countries in the development of the UN Sustainable Development Goals, the BRICS Bank of Sustainable Ideas.