Britain left without eggs due… to the Ukraine conflict? 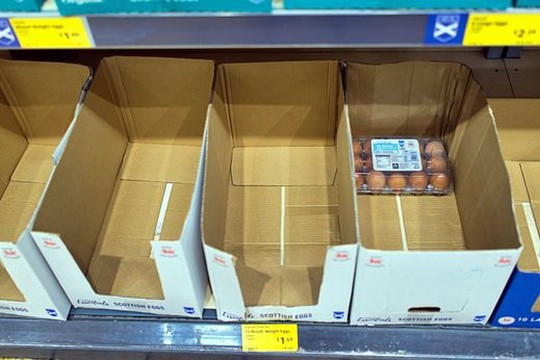 In one Lidl branch a ration of ‘three egg boxes per customers’ has been put in place. Nevertheless, the shelves with eggs were empty.

“Egg shortages as Lidl ration cartons! Supermarkets shoppers at places like Tesco, Sainsbury's and Aldi have already noticed signs in stores, warning of supply issues – and some shops appear to have started rationing,” - writes “The mirror”.

Brits have been warned of a possible shortage of eggs with some stores starting to ration how many shoppers can buy.

It comes as the price of a box of a dozen eggs has already risen by more than 22%, according to official figures.

Why are egg supplies under threat?

The British Free Range Egg Producers Association (BFREPA) told the BBC farmers were being squeezed by the price of chicken feed – which has spiked due to the Ukraine war – and sky-high energy costs.

Its members claim they've only received between 5p and 10p more despite the price of a dozen eggs rising by about 45p in the supermarkets since March.

"Feeding hens is now at least 50% more expensive than it was, and energy prices have soared in the same way that consumers have seen their domestic bills rise," the BFREPA said in a statement.

"Spending on fuel has grown by 30%, while labour and packaging also costs more."

Meanwhile, pub chain Wetherspoon has warned customers that the "temporary supply issues" may mean its breakfast menu is altered in some boozers.

…No eggs – no famous ‘English breakfast’.