Britain to lose more from Brexit than EU 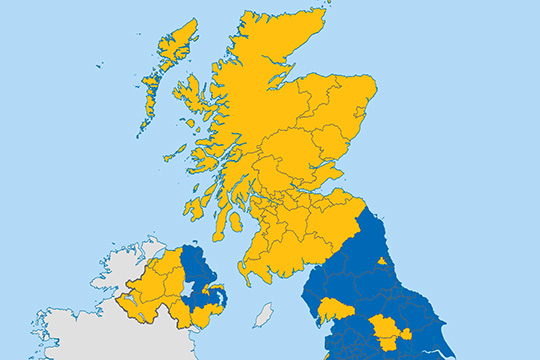 Nearly three years have passed since the Brexit referendum. As the UK’s exit from the EU scheduled for March 29 draws nearer, there have been proposed four scenarios as to what course further developments could follow: ratification of the agreement and an organized withdrawal, exit without agreement, postponement of the withdrawal and of the signing of the agreement, revocation of the signing of the agreement and non-exit from the EU. During the discussion organized by the Russian Council on International Affairs, the experts focused on how these scenarios could affect the UK and the European Union.

Oksana Antonenko, Director of the Global Political Risks Group at the British Consulting Company “Control Risk”, predicts grave consequences for the UK economy if Britain chooses to withdraw from the EU without an agreement. According to her estimates, this could result in inflation rising, the pound rate falling (by 10%), and the British economy entering a period of technical recession. "Britain will pay a high price – about 2% of the GDP - for exit without an agreement," - the analyst said. By contrast, in case of signing an agreement, Oksana Antonenko says, the British economy will continue to grow (faster than the German one), the pound rate will remain higher than the euro and, despite an increase in import tariffs, the British will hardly notice it.

Meanwhile, the consequences of “Brexit” for the rest of the European Union, in her opinion, will not be seen or felt equally clearly everywhere: “Romania and Bulgaria will not feel any impact, whereas Ireland and Poland will suffer a lot in the short term.” Germany, according to forecasts by Oksana Antonenko, will lose 0.2% of GDP in case of Brexit without an agreement. However, what poses a much more serious threat to European countries is the weakening of the common market. The special conditions and exemptions for the UK, according to the analyst, may breach the laws by which this market works. Sergei Kulik, International Development Director at the Institute of Contemporary Development, believes that it is vital for the EU countries to demonstrate consolidation and consensus in an effort to stick to the ‘no yielding’ position in the dispute over Ireland. He emphasized that the UK will lose much more from Brexit than the European Union, as 44% of the British foreign trade is done with the EU, and only 18% - with the United States.

“If Britain exits the EU, there will be no concessions” (Oksana Antonenko)

“The departure of Great Britain will strengthen the Franco-German nucleus,” – says Nikolai Koveshnikov, head of the European Integration Department of the Moscow State Institute of International Relations of the Russian Foreign Ministry. According to Koveshnikov, it has always been a “strategic brake”, blocking deeper integration or demanding special conditions for itself. But the EU is primarily a social economy, while the United Kingdom has always called for stimulating business and has always spoken against redistribution. In addition, according to Nikolai Koveshnikov, the British never felt part of Europe.

Lengthy negotiations on “Brexit” have undermined the positions of euro skeptics. According to Oksana Antonenko, an exit of Great Britain is not an indicator of the situation in the European Union. Then, the blame was put on the financial crisis, the policy of cost savings and the freezing of wages in the public sector. In addition, migration then became a significant factor. “The Conservative Party blamed the EU for all the troubles,” said Oksana Antonenko, pointing out that many of her arguments have now been refuted. Although Brexit supporters won in 2016 by narrow margin (52% against 48%), the results of the referendum are not questioned today. Nevertheless, according to experts, the UK’s exit will take long (2-4 years) while the signing of the corresponding agreement may be postponed for another six months.