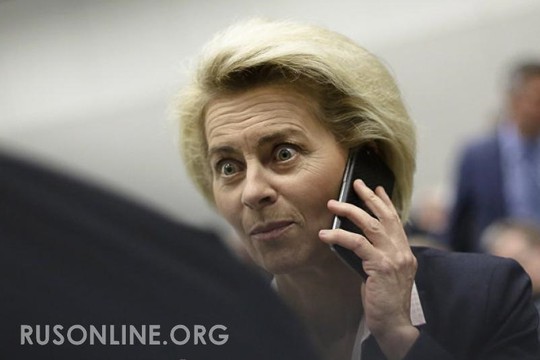 The European Union has been repeatedly warning the brutal sanctions against Russia for the war in Ukraine are inflicting more damage on Europe amid fears the continent could crash to its biggest financial crisis ever, writes British “Express”.

Brussels has responded fiercely to Vladimir Putin's war plan by smashing Russia with a raft of sanctions aimed at crippling the warring country's economy and totally derailing its war efforts. But Putin has remained undeterred by this all so far, and there are now fears he could soon wage his own political war against the European Union as part of a vicious revenge plot. Hundreds of millions of Europeans face a bitterly cold winter and have been urged to ration gas as the possibility of Putin completely cutting off supplies into the continent.

The EU has claimed the move is "politically motivated", with gas supplies running into Europe from Russia via the Nord Stream-1 pipeline quickly plummeting to just a fifth of its capacity.

In addition, Eurozone inflation jumped to 8.9 percent in July from 8.6 percent a month earlier – with the euro falling to parity against the US dollar earlier this month for the first time in more than 20 years.

Charles-Henri Gallois, President of the Generation Frexit campaign in France, warned the EU's sanctions against Russia are backfiring, warning a Eurozone recession is now "obvious". He told Express.co.uk: "Now, we are buying the same oil but through India or Saudi Arabia with a mark-up and in dollars. As the euro is falling, this becomes even more costly.

"It’s quite hypocritical as it’s the same for gas – you cannot replace Russian oil like this. You don’t have the facilities nor the equivalent.

"Economic sanctions are doing more damage to Europe than to Russia. The recession is obvious.

"The sanctions against Russia is a suicide for Europe. Economic sanctions that hit you more than Russia is totally stupid.

"We should stop sanctions and focus on a peace to avoid Europe suicide.

"If we don’t do it, Europe will face maybe the biggest financial crisis of its history."

… Another British newspaper “The Guardian” gives the opinion of its columnist:

Western sanctions against Russia are the most ill-conceived and counterproductive policy in recent international history. The economic war is ineffective against Moscow.

Instead world energy prices are rocketing, inflation is soaring, supply chains are chaotic and millions are being starved of gas, grain and fertiliser.

To criticise western sanctions here is close to anathema. Defence analysts are dumb on the subject. Strategy thinktanks are silent.

Yet, hint at scepticism on the subject and you will be excoriated as “pro-Putin” and anti-Ukraine.

Sanctions are the war cry of the west’s crusade.

The reality of sanctions on Russia is that they invite retaliation. Putin is free to freeze Europe this winter. He has slashed supply from major pipelines such as Nord Stream-1 by up to 80%.

Britain’s domestic gas bills face tripling inside a year. The chief beneficiary is none other than Russia, whose energy exports to Asia have soared, driving its balance of payments into unprecedented surplus. The rouble is one of the world’s strongest currencies this year, having strengthened since January by nearly 50%.

Meanwhile, the West and its peoples have been plunged into recession. Leadership has been shaken and insecurity spread in Britain, France, Italy and the US. Living costs are escalating everywhere.

Western sanctions are based on a neo-imperial assumption that western countries are entitled to order the world as they wish. They are enforced, if not through gunboats, then through capitalist muscle in a globalised economy.

Yet still no one dares question sanctions. It is sacrilege to admit their failure or conceive retreat. The West has been enticed into the timeless irony of aggression. Eventually its most conspicuous victim is the aggressor.

Russia is “slowly adjusting to its new circumstances”. Sanctions have promoted trade with China, Iran and India. They have benefited “insiders connected to Putin and the ruling entourage, making huge profits from import substitution”. Was this forecast?