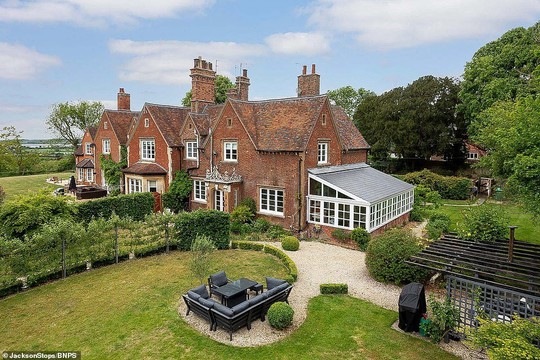 The Old Vicarage was the birthplace of the Countess of Strathmore, grandmother to Her Majesty Queen Elizabeth II.

Former Victorian vicarage (photo) where the Queen's grandmother Cecilia Bowes-Lyon was born in 1862 hits the market for £950,000, regretfully informs “Daily Mail”. It is in the village of Ridgmont, Bedfordshire, bordering the Duke of Bedford's Woburn Abbey estate.

The house has been updated since the Countess' time there, although it has kept its classic Victorian features. The house has 2,377 sq ft of accommodation with a kitchen, sitting room, dining room, study and orangery downstairs and three bedrooms, one with a dressing room, and a bathroom upstairs.

Ms Bowes-Lyon's father William Charles Cavendish Bentinck was a Church of England clergyman, appointed as a vicar of Husborne Crawley and Ridgmont by the 7th Duke of Bedford.

He was vicar at Ridgmont until his death in 1865. Ms Bowes-Lyon was born at the vicarage in 1862. She later married Claude Bowes-Lyon and they had ten children. Elizabeth Bowes-Lyon, the Queen's mother, was her youngest.

Anthony Inskip from Jackson Stops, who are selling the property, said: 'This is a unique opportunity to acquire a piece of history with this much improved period residence set in one of our desirable Woburn cluster villages bordering the Duke of Bedford's estate”.

You have the Woburn Safari Park entrance at one end of the village and Woburn Abbey nearby. It's a very desirable area.'

…The British have always had great respect for the royal family and its heritage. Now it is in the past. New times – new mores: All for sale!