«Bulgaria-Russia: the Past, the Present, and the Future». On the 135th Anniversary of the Establishment of Diplomatic Relations Between the Countries 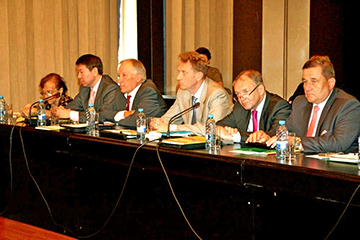 A conference titled «Bulgaria-Russia: the Past, the Present, and the Future. On the 135th Anniversary of the Establishment of Diplomatic Relations Between the Countries” convened in the National Culture Palace in Sofia on July 7-8, 2014. The event was organized by Bulgaria's influential non-government groups – the Slavs Foundation, the Russia-Bulgaria Forum, and the Federation for Friendship with the peoples of Russia and the CIS – in cooperation with the Diplomatic Institute of the Ministry of Foreign Affairs of the Republic of Bulgaria, the National Association for International Relations, the Bulgarian Diplomatic Society, and the Bulgarian Academy of Science. On the Russian side, the co-organizers of the forum were the Russian World Foundation, the A.M. Gorchakov Foundation for Public Diplomacy, the Foundation for the support and protection of the rights of compatriots, the Russian Embassy in Bulgaria, the Russian Cultural and Informational Center in Sofia, the Moscow State Institute of International Relations of the Ministry of Foreign Affairs of the Russian Federation, the Institute of Slavic Studies of the Russian Academy of Sciences, and the embassy of the Russian Orthodox Church in Sophia. The conference participants are convinced that the forum has made a considerable contribution to the academic affairs of both Bulgaria and Russia. The inclusive format of the expert panel certainly helped the political circles and diplomats to enrich their visions of the subject discussed, to familiarize themselves with the latest research results, and to get involved in the discussions of the tomorrow of the Russian-Bulgarian and the wider European agendas. The plenary sessions and panel discussions were marked with intense exchanges on an impressive range of issues pertinent to the development of the diplomatic relations and of the general dialog between Bulgaria and Russia as well as to the potential for furthering the two countries' cooperation in the economic, humanitarian, and cultural spheres.

Speakers from Sofia University, the Bulgarian Society for Russian Studies, the Institute of Slavic Studies of the Russian Academy of Sciences, and the State Academy of Slavic Culture offered a panorama of the origins of the historical, cultural, and spiritual proximity of the Bulgarian and the Russian peoples. A consensus among Bulgarian and Russian scholars  converged on the importance of reinforcing the Slavic unity,  advancing the contacts based on public diplomacy, and deepening   dialog between the two countries on the legislative and cultural levels. Particular attention was paid to the themes of the teaching of Russian literature in Bulgaria and of the cultivation of the country's Russia studies, considering that the humanitarian dialog should be constantly energized on the basis of language, literature, visual culture, and studies in ethnography and linguistics.

The October, 2013 “Thracian Gold from Bulgaria – Living Legends” exhibition at the State Historical Museum in Moscow was a highlight on the Russian cultural scene. In November, 2013, Moscow hosted the Sofia Days which also proved to be a huge success. There is a plan to organize a series of Moscow Days in Sofia.

Relations between Bulgaria and Russia in the publishing business are making bold strides. Last year saw the launch of a joint project of Russia's Rudomino Foreign Languages Library and the Bulgarian ministry of culture titled “The New Bulgarian Novel”. After a lull that spanned three decades, books by contemporary  Bulgarian authors are again being translated into Russian. It should be noted that the vast majority of serious bookstores in Bulgaria offer collections of prose, poetry, and academic literature in Russian.

A section of the aforementioned conference focused on the analysis of various aspects and geopolitical imprecations of the economic cooperation between Russia and Bulgaria. The topics in the spotlight included the ties in the energy sector along with   the potential for development in trade, industry, agriculture, tourism, and construction. The cooperation between Bulgaria and Russia in the Black Sea region was also discussed.

Despite a certain slide in bilateral trade, the two countries clearly face ample opportunities to boost its volume in the foreseeable future. As of today, positive dynamics is reported in the investment sphere as Russian companies have invested more than $2b in Bulgaria over the past decade. The biggest projects are the modernization of the Lukoil petrochemical plant in  Bourgas, the enterprise accounting for almost a quarter of the Bulgarian budget revenues, the building of the unique Kamchiya resort complex at Bulgaria's Black Sea coast by the Moscow government, and the expansion of the Gazpromneft gas station network.

Russia's interest in Bulgaria is clearly on the rise. Over 68,000 Russian tourists visited the country last year and over 300,000 Russians own real estate in Bulgaria.

No doubt, the energy sector holds the main promise for the progress to be made in the cooperation between Bulgaria and Russia. There was full agreement among the conference participants that the implementation of the South Stream project would help strengthen the energy security of both Bulgaria and and the whole Europe. South Stream is sure to play an important positive role in the economic development of Bulgaria and to drive an appreciable improvement in the living standards of the Bulgarian population.

It is a given that the potential of the Bulgarian-Russian partnership is far from being completely unlocked, and major efforts are yet to be made in the direction. Public diplomacy – the interactions between the civil societies of Bulgaria and Russia in concert with their NGOs – can be instrumental in the process. One of the NGOs is the Bulgaria-Russia coordination council which arranges on a regular basis for the realization of political and other initiatives relevant to the Bulgarian-Russian agenda. On the eve of the 70th anniversary of the World War II victory, the council suggested a plan for the collection of donations to renovate the Sofia monument to the Red Army soldiers, which has been traditionally regarded as a symbol of the friendship of the two nations.  No doubt, the fulfillment of the plan will become the highlight of the program centered around the Victory Day. The program is being jointly prepared by government agencies and public organizations of the two countries.

The Russian-Bulgarian Public Forum has opened in Russia. Last year, its co-chairs – ITAR-TASS board head V. Ignatenko and former Bulgarian president G. Parvanov – took part in the inauguration of the monument to the legendary Russian field marshal Joseph Gourko. The statue was presented to the city of Sofia by the government of Moscow. Representatives of the Russian-Bulgarian Public Forum took part in the international conference dedicated to the 135th anniversary of the liberation of Bulgaria from the Ottoman domination which had taken place in the course of the 1877-1878 Russo-Turkish war. The forum signed the accord on the fraternal ties between the city of Shipka, in Bulgaria, and the Mozhaisk municipality of the Moscow region. The agreement should enable the residents of the two regions to learn more about the history, traditions, and todays realities of Bulgaria and Russia.

Russia's minister of foreign affairs S. Lavrov praised public efforts aimed at broadening the dialog between Bulgaria and Russia during his official visit to Sofia. Facing a tight schedule of high-profile negotiations in Bulgaria, minister Lavrov, nevertheless, found the time to meet with the participants of the Russian-Bulgarian jubilee conference and with the Russian community residing in Bulgaria. The Russian diplomacy chief said in his address: “The ties between Russia and Bulgaria stem from deep affinity and strong friendship between the fraternal Russian and Bulgarian peoples, from their shared spiritual and cultural legacy, and from the memory of common feats in the struggle for the freedom and independence of Bulgaria. Relying on the centuries-old traditions, we should make convincing steps forward at present, widen our mutually beneficial cooperation in a variety of spheres, and seek out compromises on any issues, no matter how challenging that can be”. Speaking to the Russian community in Bulgaria, Minister Lavrov welcomed its assistance in strengthening the Russian-Bulgarian ties.

“You have become integral to our friendly relations as you cement them on the interpersonal level. We welcome the work which has been done by the coordination council of Russian compatriots and appreciate the events conducted by the council's member-organizations in the interests of the Russians who reside in Bulgaria and continue to feel their connection to Russia, making every effort to parlay it into specific steps to cultivate the Russian-Bulgarian friendly ties”, said Lavrov.

Talking to the Russian community, minister Lavrov cited Russian president V. Putin who said at the July 1, 2014 conference of ambassadors and diplomatic envoys that Russia would go on advocating powerfully the rights of Russian compatriots with the entire arsenal of appropriate means. Minister Lavrov stressed that the above is the objective of an array of foundations, particularly of the Foundation for the support and protection of the rights of compatriots abroad. This activity naturally implies measures intended to reinforce the positions of the Russian language and culture, to preserve the Russian identity. Russia's foreign minister reiterated that, in the context, the advocacy should be extended to all those who feel that they belong to the generalized Russian World, not just to ethnic Russians.

The presentation of the book “Between the Past and the Future. The Russian Diplomacy in the Changing World”, which took place during the conference, left a lasting impression. The book is now published in Bulgarian. Its author S. Lavrov said: “This is a result of the collective work carried out by our ministry – I have no intention to renounce my being an author, but it is indeed collective. It reflects the endeavors of our ministry to put into practice the foreign-policy doctrine confirmed by the President of the Russian Federation. I am sure that the concepts concentrated in the collection of essays are clear and acceptable to anyone in Bulgaria, to all normal people wherever they may live across the planet. We speak of the efforts that must be taken by all of us to ensure the rise of a new and fair polycentric world system. It should be based on the centrality of the UN to global affairs, on respect for the unique characters of nations, on collective approaches to conflict resolution that may not be affected by external interferences or by the use of force. Our well-known Slavic, Orthodox Christian slogan is: God is not in strength but in truth”, explained S. Lavrov.

The words that would resonate with any culture were received by the Bulgarian and Russian audiences as an encouragement of a long-term and timely initiative aimed at strengthening the ties of friendship, at deepening the understanding, and at expanding the cooperation in the interests of creating a safer and more stable world.