California is looking for partners in Russia 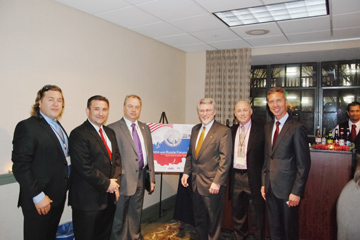 The International Business Forum "Doing Business with Russia”, was a notable event in Sacramento, the capital of California. Participants at the roundtable discussions included official representatives of the Russian Federation, the federal government and the U.S. State of California, as well as the leadership of American trade associations and members of the business community. One meeting was attended by a correspondent from the Slavic Sacramento news portal (SlavicSac.com), Ruslan Gurzhiy. We offer you his work.
"If California was an independent country, its economy would be in 12th place in the world. In 2012, Russia occupied 8th place in terms of GDP. However, the total income from mutual cooperation between Russia and the Golden State is insanely small," says Sergey Terebkov, president of the Slavic- American Chamber of Commerce, which is based in Sacramento.
"Trade between our countries in 2012 amounted to only 39.9 billion dollars", Sergei Petrov, the Consul General of the Russian Federation in San Francisco noted in his speech.  "The time we live in now is completely different from the Soviet era, when the directors of businesses were wholly under government control, so today I encourage American businessmen to invest actively in the Russian economy."
While American industry giants such as "Chevron", "GE” and "Coca-Cola" continue to build a presence in the Russian market, the head of the Slavic- American Chamber of Commerce has made the decision to focus on small businesses.
"Do not underestimate the power of small businesses in America,” said Yavon Lee, representative of a coalition of small businesses in the region. “90% of America's economic strength is tied to small entrepreneurs."
Incidentally, Yavon Lee is the official representative of the White House in California, Nevada, Hawaii and Guam. So, if you intend to do business in these regions, you should make good friends with the organizers of the forum.

Also, the event was attended by representatives of the local authorities from the city of Sacramento, Citrus Heights, Roseville, and Rancho Cordova , because it is well known that most of the Russian-speaking residents of California are concentrated in these areas , and therefore, Russian businessmen.
"Our task is to build a bridge of cooperation between the Slavic and American entrepreneurs in California and businesses in the CIS", said Sergey Terebkov. "We want to become a kind of mediator between business people who are on either sides of the ocean."
However Mr. Terebkov does not limit his activities only to cooperation with owners of small businesses. His organization regularly participates in international economic forums and exhibitions taking place in Silicon Valley, where representatives from companies such as Twitter or Google traditionally gather together.
"We are in the process of creating a platform for dialogue”, says Terebkov.  “Today U.S. and Russian investors understand the importance of participating together in international business.”
For example, Mr. Terebkov points to a keen interest in CIS countries in imports of green technology, and American interest in the biotechnology and aerospace sectors. Unfortunately, at this time, Russia was represented by only two specialists:  the Head of the International Cooperation Department of the Tomsk region, Alexei Stukanov and the co-founder of the International Logistics Congress Albert Zhukov.
Introducing the Tomsk region, Dr. Alexei Stukanov spoke about the specifics of investment development of the region, as well as presenting projects which were potentially of interest to his American colleagues.
Despite the fact that no contracts were signed during the forum, the simple fact that such an event was held in Sacramento, says a lot.
"This round table is a very important step in the development of business cooperation between Californian companies and their Russian counterparts, which as a result can bring dividends to both parties," said the president of the Slavic -American Chamber of Commerce, Sergey Terebkov. "Given the low awareness of Californian companies about the economic potential of the Russian regions, the value of this event is hard to overestimate."
The participants in the roundtable also discussed the specifics of doing business in Russia, including the issue of the legal regulation of the activities of foreign companies in the Russian Federation.
"Our dialogue with our American colleagues was dedicated to expanding and deepening inter-regional cooperation between Russia and the United States, and is able to give a new impetus to the development of trade and economic relations between our countries," Oleg Slepov, from the head office of the Trade Representation of Russia in San Francisco commented on the meeting.  "Our aim is that the projects that we have discussed today have found interested American investors."
"Today, we invite American businessmen to Russia ", said the Russian consul Sergei Petrov at the end of his speech.” Try not to be late! "
The business forum was also attended by Senator for California, George Runner, member of the State Assembly , Dr. Richard Pan, vice mayor of Roseville Carl Garcia, Sacramento city council member Steve Cohn, regional administrator for small business and representative of the White House in the western states Donna Davis, president of the California National Federation of Independent Business, John Kabateck , vice-presidents of the Slavic American Chamber of Commerce, Roman Olievsky , Ognian Gavrilov , Vladic Okel, and member of the board of directors Vadim Zyubanov, Honorary Consul of Russia in Sacramento, Natasha Owen, president of the “Afisha” media group  David Ponomar, and others."