Call for an Immediate Ceasefire in Libya 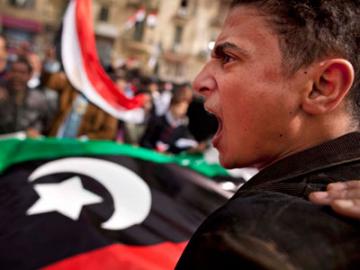 On March 31, a group of developing countries — Venezuela, Ecuador, Bolivia, Cuba, Nicaragua, Cambodia, Vietnam, Indonesia, Mali, Equatorial Guinea, etc. - called the UN Security Council to impose a ceasefire on Libya and to take urgent steps to settle the conflict in and around the country. Talks between M. Gadhafi and the rebels are supposed to be the first phase of the peace process. The initiative was welcomed by Brazil, India, and South Africa which, due to their provisional statuses at the UN Security Council, did not sign the corresponding document but pledged to expedite the political efforts aimed at reaching a deal in Libya. The document condemns the air raids and missile attacks against the country. UN Security Council Resolution 1973 – albeit  loosely worded and open to arbitrary interpretations - established a no-fly zone over Libya and did not authorize any other measures, but the planners of the Odyssey Dawn offensive parlayed the objective of protecting Libya's civilians into a license to support the rebels militarily, which was the same as stepping into a sovereign country's domestic conflict and throwing the US and NATO might behind the opponents of Gadhafi' regime.

Actually, the credibility of the «spontaneous» anti-Gadhafi protests appeared dubious from the outset, and information became available later that US, British, and Israeli operative groups had been dispatched to Libya long before the onset of unrest in the country. The groups made serious preparations for the rebellion and offered Libyan tribal leaders a share of the country's oil revenues along with independent statehood and the West's “friendship” as rewards for joining the anti-Gadhafi cause.

The fact that the Libyan crisis was driven by forces which remained in the dark drew legitimate ire in developing countries. Latin America's ALBA block took the leading role in voicing the protest as most of its countries feel they can be targeted by the Pentagon in the framework of similar scenarios. Unless a precedent of collective condemnation of pseudo-humanitarian interventions is established (which actually should have been done earlier — when Yugoslavia, Afghanistan, and Iraq came under attacks), interventions of the same type will surely be replayed in the future in various parts of the world. ALBA leaders are convinced that the basis for defusing the Libyan crisis is the protection of Libya's sovereignty, independence, and territorial integrity. Handing the call for ceasefire in Libya over to the UN Security Council, Venezuela's envoy to the UN J. Valero stressed that sovereign nations should be the only makers of history and that no foreign armed forces should have the right to interfere in Libya. He mentioned that the top obligation of the UN, as stated in its Charter, is to maintain peace and stability, and therefore it should in the shortest term possible stop Libya's armed conflict which may have unpredictable consequences.  Preparations for the occupation of Libya are underway, the air strikes are leaving the country's infrastructures in ruins, and the death toll among Libya's civilian is rising.

No visible reaction to the document from the West's side followed so far. The coalition is hammering Gadhafi's regime  as if playing a game without rules. On March 27 the NATO Council took over the coordination of the offensive against Libya. A group of forces had been amassed along Libya's borders and waits for the signal to start the invasion. The US, Great Britain, and France secretly feed weapons to the rebels and plan to give them a role in implementing so far undisclosed separatist projects. Gadhafi is being hunted, and killing him evidently ranks high on the list of priorities of the Odyssey Dawn offensive.

Some of Gadhafi's former associates fled from Libya on the eve of the showdown, but Gadhafi's grip on the country evidently remains firm. The claims in the Western media that Gadhafi's envoys are in London negotiating capitulation terms for the regime are in all likelihood a myth addressed to undiscerning audiences. At the moment, the conclusion stemming from the available patchy picture of the developments in Libya is that Gadhafi's forces are successfully pressuring the rebels out of the country, but an overland NATO intervention can easily overturn the trend. Gadhafi stays in Tripoli and regularly issues televised addresses, in one of which he warned that a serious war between Muslims and Christians — a medieval-type of war bound to quickly spin out of the West's control - can break out unless the coalition's attack against Libya comes to a halt. Gadhafi called the coalition to stop the reckless bloodshed, the triumph of power over law, and the erosion of the Mediterranean region's common interests.

Latin American media are discussing various blueprints for Gadhafi's response including kamikaze attacks against nuclear power plants in France and Italy. A Venezuelan analyst suggested the hypothesis that, in the name of Washington's geopolitical ambitions, the CIA can organize an attack against a symbolic European target like the Eiffel tower in Paris and sell it as a terrorist act ordered by Gadhafi. A war in the proximity of Europe would certainly expose Europeans to considerable risk. It is also widely held that a war with ostensibly noble objectives can help the West ward off the 2011-2012 financial crisis which is looming on the horizon, and that this might be the reason why — in breach of the international laws and promises dispensed to partners — the US and the EU are bracing for an overland offensive against Libya. No doubt, the cost of the mission would be high for the very Libyan civilians defending whom is the coalition's stated goal.

Given the obvious inability of the UN to help Libya overcome the crisis peacefully, the BRICS summit due to convene in China on April 14 seems to be the last ray of hope. The BRICS leaders should not and likely will not ignore the situation in Libya — if they do not send a clear message on the issue, Libya will not be the last victim.