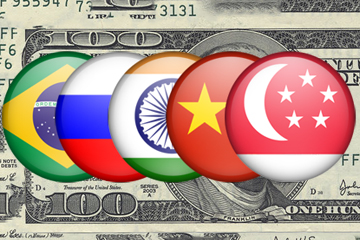 On April 10, in an interview with a CNN host and political observer Fareed Zakaria, the former secretary of state James Baker, when he was speaking about the current global changes, said the following: “The biggest challenge facing the U.S. isn’t turmoil in the Arab world. It’s our debt bomb”.  He said that without a strong dollar the US will turn into the United States of Greece. I think we could go on with the list of the problems the US is not interested in such as human rights, democracy, freedom and other “fundamental” things. It also concerns terrorism to some extend.

Lowering of US state treasury bills’ rating by S&P on Tuesday was a logical though a very belated decision. The additional issue of state treasury bills in autumn 2010 was a desperate measure of the Federal Reserve System following the lack of interest to the treasury bonds among investors.  At the same time it might be a good advertisement for the agency and it will keep some influence in future considering that the changes in the entire system of estimates in the rapidly changing financial world are inevitable.

There are three main options to strengthen dollar. The first one is the reduction of costs and the development of exports (a standard recommendation from the IMF). Also import substitution can be added to this. The second option is the weakening of currencies and economic positions of competitive countries. The third option the use of the resources from other countries to support dollar.

The current work concerns all the three options. As for the first one – there is no progress to be seen there. As for the second option certain results have been achieved there if we mean the undermining of Euro, Yen, Ruble and partly also Yuan in different years. Export of “toxic” banking products was definitely Wall Street’s diversion – if we speak about the recent years. If we take a longer time period than, using an expression of Jozeph Stiglitz we may say that the US has been “exporting crises”. This has been the case during the last 30 years of “deregulation” [1]. In the last six months the export of hot money and inflation were added to this list. The third option to strengthen dollar was clearly cut in the Middle East and now also in Northern and Western Africa.

The global community can and should reproaching the US for suppressing competitors, “Trotsky-style” export of revolutions, seeding senseless riots, holding back social economic development and violation of sovereignty of other countries. But at the same time, considering the main cause– the dollar cause – of the destructive behavior of the “lost hegemony” we should also look for possibilities of constructive interaction with the Empire of the Good and ways of its gradual rehabilitation.

BRICS countries (Brazil, Russia, India, China and now also South Africa) are strong not because they are morally right (what is the price of being right in the world money?) but because they are capable of reducing the use of the American currency, gradually or even sharply.  Both Wall Street and Washington will have to regard BRICS’ proposals on the reform of the international financial system.

It is unlikely that we will get the real picture of correlation of forces in the global economy if we compare GDPs of BRICS and the developed countries using the current currency rate.

The result we get in this case - about 18% of the world GDP – the same for the US – we can first multiply by two – in China and India the prices are twice and respectively almost three times lower than in the US. Secondly, it would be proper to subtract about 1/3 from the US’ GDP. In the US 40% of all the profits falls to the share of the financial sector and further “shrinking” of this share is quite likely. The remainder (about 12%) is the average weighted figure of commodity and services exported by the US. It is unlikely that they cost more.

Under this more realistic estimate of the economic potentials the free floating of financial resources to BRICS will simply blow the current currency system up. But BRICS countries do not need this. There is no haste for them to bury their healthy economies in the financial fat of the foreign origin. Besides that, the US’ experience, which has lost competitiveness in industrial production, is an obvious warning against it. Here we see the paradox of the financial globalization: by selectively attracting foreign investors, you limit the convertibility of their money. As a result, the US demands addressed mainly to China about “full” convertibility of Yuan have hung in the air. In fact dollar does not have convertibility either.

Starting the reform of the global financial system the IMF has already admitted the need to regulate and limit the flow of hot money – the relevant regulation has been issued earlier this month. We should not rule out that the introduction of currency limitations in the financial “fortresses” is better than national defaults.

It is obvious that the devaluation of dollar, which has been formed for years and only now has come into surface, should not lead to any sudden movements. The currency sector is the sector, where patience and conservatism are more welcome. The US should think over the crisis of its currency. “The Great robbery” of American taxpayers in an attempt to save Wall Street and the nationalization of its debts  is not the only reason for that. The growing discontent with “financomics” in Europe and the achievements of careful bankers and regulators in Asia are gradually forming consensus in the world that a deep reform of the global financial system is needed. As the interaction of BRICS in the currency sector becomes more intensive the weight of the interests of these countries will also grow.

The way out of the dollar crisis probably lies in the field of correlation between the real sector of the economy and finansomics in the US. It would be strange to doubt the ability of the country with powerful human, material and technological resources to work out an adequate economic strategy taking into account the current situation in the world. The return of money from financial sector (before they burn there) into the real economy is possible. Here is an episode from the restless life in Hong Kong in the years of the Asian crisis of 1997-1998. Then a group of brokers, who had lost almost all their funds decided to invest the rest of their money into a pigfarm and soon made a good profit on supplying fresh meat to the public catering sector.

I wonder if those who are now building the world financial hub in Moscow know this episode from the history of the former British colony? And do they read the books by Stiglitz?