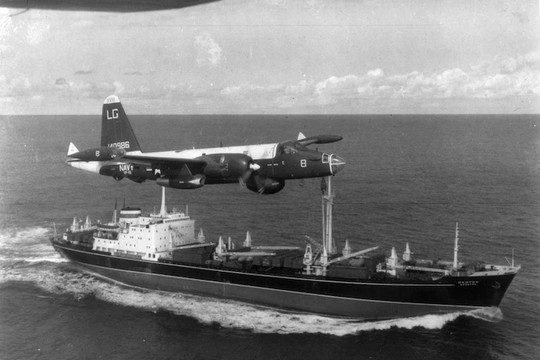 A P2V Neptune patrol plane flies over a Soviet freighter during the Cuban missile crisis in 1962.
Photo Getty Images/Washington Post.

“I have to explain once again that Russia is not threatening anyone with nuclear weapons,” said Russian deputy Foreign Minister Sergey Ryabkov in an interview with the “Rossiya Segodnya” International Information Agency on the 60th anniversary of the Caribbean crisis.

Question: It was said in Moscow before that the main difference between the Caribbean crisis and the current tense situation in Russia-US relations is that in the 1960s there was a confidential channel between the leaders of the two powers. Are there any chances to create a similar communication channel today? Are the existing communication channels effective enough to prevent the Caribbean crisis from happening again?

Sergey Ryabkov: It is an open secret that Russian-US relations are in a very poor state. They are comparable to the peak moments of the Cold War. The main problem today is that the Americans have trampled underfoot international law and absolute taboos in diplomatic practice. Contrary to geopolitical realities, the United States is trying to subdue all others, like it did during the Caribbean crisis. It wants to compel others to live according to its notorious “rules” that are beneficial to it alone. The Russophobic American elites are thinking irrationally and pushing the US leadership to open confrontation with Russia and eventually to the irresponsible escalation of international tensions.

Is it possible to break this vicious circle of escalation? Of course it is. To move forward, Washington should seriously work on its mistakes and give up claims to global domination in the paradigm of a unipolar mentality. It should also make the correct conclusions from its abortive attempts to interfere in our domestic affairs and adjust its own conduct accordingly.

We understand that the United States finds it difficult and painful to face the new alignment of forces. But the sooner it starts considering the current geopolitical realities, the less mess it will create in the current process of forming a just multipolar world. The current US administration has isolated itself from Russia by introducing more and more “crippling” or “punishing” sanctions that do not actually work. It is unable to “tear the Russian economy to tatters.” Our economy is confidently withstanding the blow. Nothing was achieved either by the attempts to put together an international anti-Russia coalition that would be broader than the traditional team of the US and its vassals. This explains Washington’s ambivalence. It cannot decide whether to talk with Moscow or strike a posture, rejecting a direct dialogue until it changes its conduct.

For our part, we do not reject contacts. We believe talking is better than not talking. But such communication should be based on mutual respect and consideration of each other’s interests.

Question: Where does Moscow see the “red line” beyond which Russia and the US may start a nuclear escalation?

Sergey Ryabkov: The United States and its dependents are actively using nuclear rhetoric against the backdrop of events in Ukraine. They are trying to make it seem like Russia is getting ready for strikes with WMD. I have to explain once again that Russia is not threatening anyone with nuclear weapons. The Fundamentals of State Policy on Nuclear Deterrence clearly define the terms of their use: obtaining reliable information about the launch of ballistic missiles attacking Russia or its allies; the use of nuclear weapons and other weapons of mass destruction against Russia and its allies; enemy impact on critical government or military facilities, the failure of which will lead to the disruption of response actions by nuclear forces; and aggression against Russia with the use of conventional weapons, when the very existence of the state comes under threat.

Obviously, a direct clash with the US and NATO is not in Russia’s interests. We are warning and hoping that Washington and other Western capitals realise the danger of uncontrolled escalation. We note with regret that the continuous large-scale assistance to Kiev, the training of Ukrainian military personnel on the territory of NATO countries, and the provision of intelligence information and real-time satellite photos up to defining targets for artillery strikes and planning Ukrainian army operations are increasingly involving Western countries in the conflict on the side of the Kiev regime. US and European leaders of different levels are calling for the defeat of our country on the battlefield. In this situation, Russia will have to take appropriate countermeasures, including asymmetric ones.