Caspian Sea – cooperation on the basis of openness, good neighborly relations and partnership 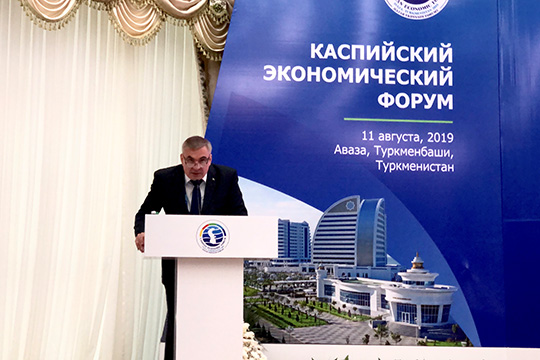 On August 12, Turkmenistan played host to the 1st Caspian Economic Forum, which was held in the Avaza National Tourist Zone. The events that took place in the run-up to the forum included business meetings of representatives of the Caspian countries, an international Caspian exhibition of innovative technologies and the Exhibition “Turkmen Sahrasy-2019”. Initiated by Turkmenistan’s President Gurbanguly Berdimuhamedov, the forum was designed to demonstrate the achievements and potential of various sectors of the economy of the Caspian countries and their partners, to share experience on the use of the latest technologies, and to strengthen cooperation. The fact that dozens of foreign companies participated in the forum indicates that Turkmenistan is open to whatever new and useful the world practice has to offer, builds relations with all countries with due regard for their national interests as well as socio-economic, spiritual and cultural development. According to President Gurbanguly Berdimuhamedov, these kinds of exhibitions are of great importance for exploring prospects for a further development of trade and other economic relations not only between the Caspian states, but also with all parties concerned. Besides, they are also crucial for fostering good neighborly relations, and for promoting trade, transport, transit, economic and investment partnership between countries of the region and the international community.

The Caspian Exhibition of Innovative Technologies featured a number of exchange auctions that presented products manufactured in Turkmenistan. More than one hundred foreign companies competed in tenders held by the State Commodity and Raw Materials Exchange of Turkmenistan (SCRMET). The participants came from all corners of the globe, including representatives of companies from the USA, Great Britain, United Arab Emirates, Germany, Estonia, Switzerland, Russia, Turkey, business representatives from Hong Kong, Singapore, Luxembourg, Malta, Afghanistan, Uzbekistan and other countries, as well as Turkmen entrepreneurs. Among major exchange operations on the Commodity Exchange is the sale of oil products and products of petrochemical industry: gasoline, diesel fuel, polypropylene, aviation kerosene, liquefied gas, technical iodine, carbamide, technical sulfur and others. The main export items comprise products of the Turkmen light industry, agriculture and processing industries. At the end of the business forum, which was attended by about 300 chief executives and representatives of 90 large companies, banks, associations and business groups, they announced the results of exchange auctions which were held within the framework of the Caspian innovative technologies exhibition. A total of 120 transactions worth 395 million 320 thousand US dollars were concluded during the forum. Entrepreneurs from Russia, Turkey, the United Kingdom, Luxembourg, the United Arab Emirates, USA, Singapore, Hong Kong and Afghanistan purchased hydrotreated diesel fuel, A-80 gasoline, L-0.2-62 and L-0.5-62 diesel fuel , TC-1 aviation kerosene, total petroleum coke, ECO-5 hydrotreated diesel fuel produced by Turkmenistan’s research and development center, as well as ECO-93 gasoline and liquefied gas produced by enterprises of the Turkmengaz State Concern. Foreign exchange transactions were struck for carbamide grade B and technical iodine produced by the State Concern Turkmenchemistry. Other business deals were signed for cotton yarn, cotton fiber, portland cement and glass, and the purchasing countries were the Russian Federation, Turkey, the United Arab Emirates, and Uzbekistan. Turkmen entrepreneurs purchased polypropylene and polyethylene for a total of 43 million manat.

Apparently, the forum contributes to a greater potential of relations between the Caspian states, through identifying problems that impede the development of economic ties between the Caspian countries, and it leads to a better coordination of joint efforts in a variety of areas based on openness, good neighborly relations and equal partnership.

Held on the first day of the forum was an official ceremony for signing documents that consolidated the agreements Turkmenistan achieved in the course of the Caspian Economic Forum – 2019 with various countries and international organizations, including Russia, the USA, Germany, Italy, the OSCE, and the United Nations.

Also on the first day of the forum, a briefing was held for media representatives following a meeting of business circles. It focused on the main topics of the discussion, drew conclusions about the existing opportunities for enhancing cooperation, and provided a balanced and comprehensive assessment of the multifaceted investment potential of Turkmenistan.

International Affairs: How do you assess trade and investment cooperation of the Caspian countries? Is it possible to assume that the full potential of cooperation is used?

Serdar Durdyev: The potential is not used to the full yet. It is much more substantial. It is at maximizing this potential that the First Caspian Economic Forum – 2019 initiated by Turkmenistan is oriented at. In particular, it promotes a more systemic, sustainable trade and economic integration of the Caspian states. The opportunities are enormous. In 2018, the “Convention on the Legal Status of the Caspian Sea” was signed, along with a number of industrial agreements. It is about establishing a fundamental, long-term trade, economic, scientific, logistic, environmental cooperation. The forum is aimed at just that.