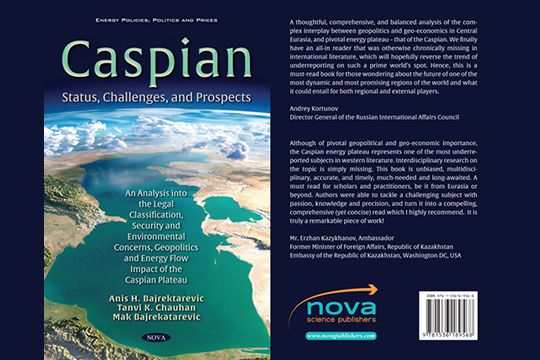 An Analysis into the Legal Classification, Security and Environmental Concerns, Geopolitics and Energy Flow Impact of the Caspian Plateau

How has the world’s largest inland body of (salty) water escaped the economic and political notice for so long? And it is for a resource-rich area of a unique locality that connects Europe and Asia in more than just geography. Simply, the Caspian Basin is an underrated and underexplored topic with scarce literature on its geomorphology, mineral deposits and marine biota, its legal disputes, pipeline diplomacy, environmental concerns and overall geopolitical and geo-economic interplays.

As the former Minister of the Canadian government and Secretary General of the OECD - Honorable Donald J Johnston – states in the foreword, Caspian – Status, Challenges, Prospects “is a fitting title for a book that masterfully gives an objective, comprehensive overview of the region. The authors have compiled an analysis of Caspian’s legal classification, security and environmental concerns, geopolitical scenarios, and energy flow impacts as they affect the world’s largest continental landmass - Eurasia.”

From comprehensive but content intensive insights on Caspian littoral states Azerbaijan, Kazakhstan, Iran, Russia and Turkmenistan, to external actors like Turkey, EU, China and the United States, readers are presented how separate actors and factors interact in this unique theater. The book elaborates on the legal classification of the Caspian plateau including the recent ‘Convention on Legal Status of the Caspian,’ to the numerous territorial and environmental security concerns.

Prof. Anis H. Bajrektarevic and his co-authors present Caspian as the most recent, fresh and novel way, in one stop-shop offering broad analysis on the Caspian region. It is a single volume book for which extensive information is exceptionally rare to find elsewhere. Following the read, authors are confident that a new expanse of scholarly conversation and actions of practitioners will unfold, not only focused on Caspian’s unique geography, but its overall socio-economic, politico-security and environmental scene.

Welcoming the book, following words of endorsements have been said:

The Caspian basin and adjacent Central Asian region (all being OSCE member states, apart from Iran) have, since the early Middle ages, acted as a crossroads between different civilizations and geopolitical spaces. In an increasingly interconnected world, growing geopolitical competition, economic interdependence and the emergence of new global challenges, particularly those related to water, energy and the climate emergency, have highlighted the relevance of this region, making it of increasing interest to researchers and academics. This book presents a thorough analytical compendium of historical factors, political dynamics, economic trends, legal frameworks and geopolitical interests which underpin, but also affect, the stability and development of this complex, diverse and strategically significant region.

A thoughtful, comprehensive and balanced analysis of the complex interplay between geopolitics and geo-economics in Central Eurasia, and pivotal energy plateau - that of Caspian. We finally have an all-in reader that was otherwise chronically missing in international literature, which will hopefully reverse the trend of underreporting on such a prime world's spot.

Hence, this is a must-read book for those wondering about the future of one of the most dynamic and most promising regions of the world and what it could entail for both reginal and external players.

Although of pivotal geopolitical and geo-economic importance, Caspian energy plateau represents one of the most underreported subjects in the western literature. Interdisciplinary research on the topic is simply missing.

Therefore, this book of professor Bajrektarevic and his team - unbiased, multidisciplinary, accurate and timely – is a much-needed and long-awaited reader: A must read for scholars and practitioners, be it from Eurasia or beyond.

It is truly a remarkable piece of work!

Authors were able to tackle a challenging subject with a passion, knowledge and precision, and turn it into a compelling, comprehensive yet concise read which I highly recommend.

ARTNeT secretariat is pleased to see how our initial invitation to Prof. Anis H. Bajrektarevic to present at the ARTNeT Seminar Series in 2015 evolved. The talk was initially published as a working paper for ARTNeT (AWP 149). Now Prof. Bajrektarevic, in collaboration with another two co-authors, offers a comprehensive study on a nexus of legal, security, and environmental issues all emanating from and linked to energy cooperation (or lack thereof) in the subregion. This volume's value extends beyond the education of readers on the Caspian Basin's legal status (e.g., is it a sea or a lake?). It is just as relevant for those who want a more in-depth understanding of an interplay of economic, security, and political interest of players in the region and outside. With the global institutions increasingly less capable of dealing with rising geopolitics and geo-economic tensions, more clarity – even if only about some aspects of those problematic issues - should be appreciated. This volume offers such clarity.

It is my honor to reflect on this work on Caspian. Comprehensive and content rich, this book of professor Anis H. Bajrektarevic and his co-authors brings up comprehensively all the useful information on Caspian, with the geographical and historical background and cultural, economic as well as security aspects related to it.

Authors’ novel and unbiased approach shall certainly help decision makers in their bettered understanding of the region that has centuries-long history of peace and cordial neighbourly relations. Long needed and timely coming, I warmly recommend this reader to those who want to know, but more importantly to all those who want to understand, this pivotal region of the world.

The book by Professor Bajrektarevic and his co-authors embodies a wide-ranging overview of the intertwined interests pursued by the young democracies of the Caspian basin, battling with inherited land and water disputes, and their interplay with regional and global powers. Apparently, supporting political independence of the formers and promoting their integration into the latter’s markets requires adequate analyses, timely outreach policies and consistent engagement. In this sense the publication serves as one of the scarce handbooks to understand diverse interests of stakeholders, dynamically changing security architecture of the region and emerging opportunities of cooperation around the Caspian Sea.