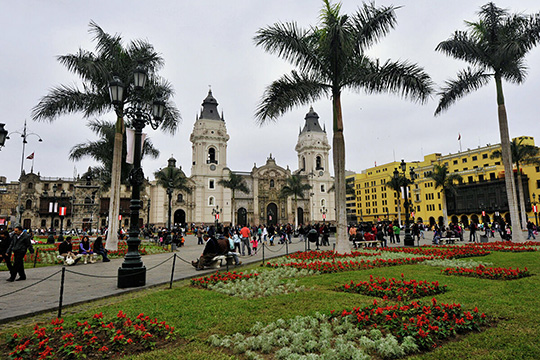 Like the rest of the world, countries of Latin America and the Caribbean are struggling to cope with the COVID-19 pandemic. As a large regional organization which unites practically all countries of the Latin American continent, the Community of Latin American and Caribbean States (CELAC) is bravely facing the challenges of global pandemic, taking timely measures and searching for appropriate solutions.

Ever since the birth  of CELAC, Russia has announced readiness to cooperate with this organization, which was formed to carry out independent foreign and home policy, excluding interference from the United States and Canada. The Russian Foreign Ministry has established pragmatic ties with the Community and has been developing a constructive dialogue with it. As contacts with CELAC countries expand, Moscow supports their striving for unity and consolidation of their sovereignties for the sake of preserving national identity.

A major step towards strengthening Russia’s cooperation with CELAC was a meeting of Russian Foreign Minister Sergei Lavrov with heads of foreign ministries of the enlarged “quartet” of CELAC in Sochi on November 14th and 15th 2016. The meeting resulted in the adoption of a ‘road map’ of practical cooperation, which envisaged further progress in the development of trade, economic, political and humanitarian ties.

The dialogue between Russia and CELAC continued in the course of Sergei Lavrov’s traditional meeting with foreign ministers of the Community’s expanded ‘quartet’ which took place ‘on the sidelines’ of the 72nd session of the United Nations General Assembly on September 20th 2017. The participants in the talks analyzed the outcome of their work on the above mentioned ‘road map’, and outlined further steps to promote cooperation between Russia and CELAC.

At present, talks are under way to organize a meeting between Russia and CELAC, or Eurasian Economic Union (EAEU) and CELAC. This issue was considered during Sergei Lavrov’s meeting with his Mexican counterpart Marcelo Embrard in February this year.

As it seems, CELAC is developing in line with modern trends which point to the formation of a polycentric world and a greater role of regions in global governance – a trend which meets the interests of the entire world community.

Director of the Latin America Department of the Russian Foreign Ministry Alexander Shchetinin points out that «Russia attaches great significance to cooperation with CELAC – the most authoritative and integrated structure of the Latin American region. What brings us closer is a shared view that it is essential to build a fair multi-polar world order on the basis of international law and the key coordinating role of the United Nations, and  proceeding from the assumption that any attempts to interfere in the domestic affairs of sovereign countries are inadmissible. We are faced with largely similar agendas in the world of today»1.

Amid the coronavirus pandemic and the current crisis on  the world energy market, CELAC is experiencing a difficult time. Unfortunately, Latin Americans remain split on Venezuela. Considering that decisions on key issues are adopted on the basis of consensus, such differences led to a slowdown of CELAC’s work and disrupted its cooperation with partners beyond the region.

That the Community is experiencing difficulties becomes clear from Brazil’s decision to suspend its membership in the organization (January 2020). Brazilian Foreign Minister Ernesto Araujo has said CELAC «yielded no results for the  protection of democracy and in other areas». Instead, it «provided a speaking platform for non-democratic regimes in Venezuela, Cuba, Nicaragua»2.

Mexico, currently holding the rotating presidency of CELAC, has opted for reactivating the process of integration, strengthening CELAC’s independent role, including by institutionalizing mechanisms of cooperation with third countries. The goal is to transform this multi-party body into a major integration platform in Latin America.  And the emphasis is on  striking common ground as CELAC moves towards non-confrontational, positive agenda with a view to establish cooperation in healthcare, technology, science, environmental protection and regional security.

CELAC’s health ministers and foreign ministers gathered for an on-line conference in March and April this year while CELAC experts also met on-line to discuss the  COVID-19 pandemic.

The on-line conference, which took place on April 27th 2020, was addressed by Executive Director of EU-LAC Paola Amadeus, representative of the Mexican presidency in CELAC, Ambassador Mauricio Escanero, and head of the  General Secretariat of Central American Integration (SICA) Olinda Salguero, who discussed in detail a regional plan of action in case of emergency which was devised by SICA’s focus groups3.

The regional plan in question provides for action in five major areas:

The main points of the regional plan of action in emergency situations are as follows:

- joint talks of the Council of health ministers of countries of Central America and the Dominican Republic (COMISCA) within the framework of SICA on the purchase of medicines and medical items;

- a constant monitoring of the situation in the region with the help of the «SICA COVID-19» information and coordination platform;

-  a free transit of goods via SICA countries to guarantee supplies;

- activation of the humanitarian assistance network in the region;

- development of a system  of regional economic indices for a preliminary estimate of the influence of COVID-19 on  countries of the region;

- streamlining and dissemination of information in real time, using SICABot on WhatsApp etc.;

At present, the aftereffects of the coronavirus pandemic undoubtedly require quick reaction from states and joint measures in healthcare, economy and social sphere. However, if these efforts are to prove effective and timely, it is essential to work out the appropriate strategies to coordinate the countries’ rapprochement on multilateral and regional levels, by discarding petty grievances and minute differences for common good. Apparently, it is CELAC that could play a weighty role in it.