Censorship and legality, or why Kiev is so afraid of Russian books and Ukrainian TV channels 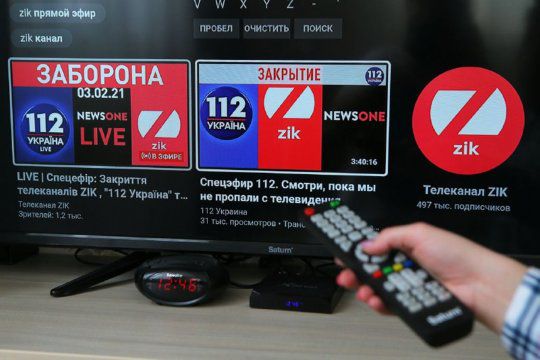 One of the most expressive and emotionally supercharged performances based on Mikhail Bulgakov’s timeless novel The Master and Margarita was staged at the Suzirya Theater in Kiev. The actress who plays Margarita is alone on stage sitting in a large chair, in front of a tiny audience of just two dozen spectators, and uses only a jacket, a yellow scarf and a hat to transform herself into the characters of the immortal novel. People had for many years been coming to watch this show, always bringing along bouquets of yellow flowers.

Now it looks like one of the greatest writers who ever put pen to paper, who immortalized Kiev, securing for the Ukrainian capital a place in the history of world literature with The White Guard and his other oeuvres, has become ideologically unacceptable.

Serhiy Oleinik, who oversees the licensing procedure and control over the import of printed materials from Russia, including books, at the State Committee for Television and Radio Broadcasting of Ukraine, thus explained this latest change of heart: “We never tire of saying that in their work the state bodies are guided exclusively by legal norms, not by their own or someone else's idea of ​​justice.” [i] And the law simply reflects Kiev understanding of “justice,” since Ukrainian laws define Russia as an “aggressor.” Therefore, Oleinik says that: "National interests demand the immediate adoption of a law that would ban the import of books from the aggressor state."

Getting back to the specific works and authors, the import of Bulgakov's The Master and Margarita is now banned. Mr. Oleinik provided the following explanation: "The foreword to Mikhail Bulgakov's novel The Master and Margarita mentions representatives of the Russian cinema, included in the “List of Persons Posing a Threat to the National Security of Ukraine" for their public support of the military intervention in Ukraine." Just how the mention of Russian actors in the book’s preface threatens Ukrainian security Oleinik never explained though. Apparently, the reasons are too subtle for simpler minds to comprehend.

Even a diehard liberal oppositionist, who, at least in part, is spiritually close to the Ukrainian fighters against "Russian aggression," such as Boris Akunin, was not spared. According to Oleinik, “there was a period when [Akunin] looked at the history of the “prison of nations” through rose-tinted glasses. As an example, I can cite a series of detective stories he wrote about Erast Fandorin, where the Russian security officer is shown not as a blood-thirsty goon, but a true-blue 19th century aristocrat.” In the mind of this Ukrainian censor, Fandorin should have been described as a Russian “silovik" - a vicious satrap and executioner, dumb and uncivilized.

The State Television and Radio Committee of Ukraine also banned, "with all due respect to Boris Akunin’s personality and work," his book The History of the Russian State. From the origins to the Mongol invasion. Part of Europe; and The History of the Russian State. Horde period. Part of Asia. Ukrainian officials, apparently boasting scientific degrees in history, considered that "these books convey a purely imperial view of history and abound in various historical myths."

The book by Oliver Stone and Peter Kuznick, The Untold History of the United States, has also been banned. According to the guardians of Ukrainian statehood, it “contains a number of myths created by Soviet propaganda about Ukraine’s national liberation movement, which have long been debunked by historians with facts and documents.” I believe that by “historians” they have in mind the contemporary Ukrainian historians and employees from the notorious "Institute of National Remembrance," who have no need for documented facts and have their own view of history that corresponds with the task of proving "the age-old origins of Ukrainian statehood and permanent struggle for independence.” In this sense, one of the leaders of the so-called Ukrainian national liberation movement, Stepan Bandera, is a fiery revolutionary and an innocent martyr, rather than a nationalist and an agent of Hitler's special services.

In yet another example of Kiev’s official position, Oleinik stated that “Whether someone likes it or not, absolutely every Russian book is to a greater or lesser extent, a bearer of the ideology of the ‘Russian world,’ because a good book published in Russia, inescapably evokes positive associations with the aggressor state." No comment. This is nothing but a rewording of the famous, or rather infamous, line by Josef Goebbels: "When I hear the word 'culture', I reach for my gun." When speaking about laws, this Ukrainian official apparently forgets about the Constitution of his own country, whose Article 15 states that "Censorship is prohibited."

Moreover, the attempts to bring into one the Ukrainian law and Ukrainian patriotism clashes with the laws of the market, with Oleinik saying that his department had issued permits for the import of 79 books in Ukrainian, issued by Ukrainian publishers, but printed in Russia. He complained, however, that “the reason why Ukrainian publishers have their books printed in enemy territory is obviously an economic one due to the cost of printing services. Here the legislation is silent about some moral safeguards and constraints..."

Ukrainian censors consider themselves historians and ideologists, and although they use legal grounds for banning books, they are unable to suppress the “unpatriotic” behavior of their own publishers. Such an approach is absolutely formal too, since books are banned not only because they contain views on historical events that are not shared by censors, but also because they were published in the “wrong” country, the foreword mentions the names of sanctioned persons, or the picture on the cover is not “right.”

However, censorship in the field of book publishing in the modern world pales in comparison with the Ukrainian authorities’ very latest decisions concerning electronic media, namely the broadcast ban on three nationwide opposition TV channels.

Ukraine has never seen such a triumph of “democracy” before. True, all of its presidents, starting with Leonid Kravchuk, closed or tried to close one TV channel. Pressure on Petro Poroshenko’s Channel 5 from Leonid Kuchma only added to its popularity during the "Orange Revolution," and the closure of the TVi channel under Viktor Yanukovych helped spark yet another “revolution."

However, under Volodymyr Zelensky the promised level of democracy and the value of freedom of speech literally went through the roof with the presidential decree greenlighting the decision by the National Security and Defense Council of Ukraine (NSDC) to use sanctions against the Verkhovna Rada deputy from the Opposition Platform - For Life faction (OPFL) Taras Kozak, as well as eight companies - founders of the TV channels "112 Ukraine", ZIK and NewsOne, linked to the chairman of the OPFL’s political council, Viktor Medvedchuk.

The legal aspect of imposing sanctions on a Ukrainian politician and the closure of television channels deserves a special mention. Viktor Medvedchuk called out the illegal nature of the NSDC’s decision and the presidential decree: “This decision is absolutely unlawful, because according to part two of Article 1 of the Law of Ukraine “On Sanctions,” they “can be applied by Ukraine against a foreign state, a foreign legal entity, a legal entity controlled by a foreign legal entity or non-resident individual, foreigners, stateless persons...", while MP Taras Kozak is a citizen of Ukraine, and the TV channels 112 Ukraine, NewsOne and ZIK are Ukrainian legal entities.” [ii]

In addition, the Ukrainian president has no authority to shut down a TV channel without a court decision. Only the National Council on Television and Radio Broadcasting of Ukraine can revoke a channel’s license, but it didn’t do so, although it said that the live broadcast of Viktor Medvedchuk’s October 2020 meeting with Russian President Vladimir Putin to discuss possible deliveries of the Russian Sputnik V vaccine to Ukraine, was a violation of Ukrainian law, resulting in the imposition of sanctions and a broadcasting ban. However, the National Council did not have enough grounds for such a decision because it would not have passed the vote in the Council, which is a collective body. This means that the decision was obviously made under the pressure of circumstances (inability to solve the problem of a sufficient amount of vaccine for Ukrainian citizens), a drop in the president's rating and political pressure.

However, at a February 3 media briefing, NSDC Secretary Alexei Danilov said that “regarding the sanctions’ legality, we have no doubt that everything has been done in line with the current legislation, and all the necessary procedures have been followed.” [iii] He also referred to the fact that the sanctions were imposed in accordance with a pertinent resolution by the Verkhovna Rada of October 4, 2018, as well as to the fact that the Security Service of Ukraine had made proposals substantiated by relevant documents. Danilov also said that the legal grounds for sanctions against Kozak would be forthcoming (!): “Wait a minute, who said that these people are not controlled by a foreign state? Wait, and, as they say: "You will get them soon." Just like that! Meaning that there are no legal grounds for "sanctions" against Kozak now, just as there are no grounds for banning TV channels, but they are still looking for these grounds everywhere. In particular, Danilov neither refuted, nor confirmed that Kozak could be charged with illegal operations with coal from Donbass, and, therefore, could be accused of "financing terrorism." However, this does not remove the question of "sanctions" that cannot be imposed exclusively on Ukrainian citizens and legal entities.

My guess is that the Ukrainian special services are now working hard to dig up evidence of Kozak's foreign citizenship so as to find legal grounds for imposing sanctions against him, a Ukrainian citizen, as if he were a foreign national, whose actions pose a threat to the national security of Ukraine. But even if Kozak happens to have, say, Hungarian or Israeli citizenship it will hardly make the Kiev authorities and its special services happy because what they need is for him to be a citizen of the “aggressor state.”

It looks like Viktor Medvedchuk’s activities in Ukraine are the main reason for the sanctions and the deprivation of opposition channels of their broadcasting rights. Another such reason was apparently the broadcast of a meeting between Viktor Medvedchuk and Russian President Vladimir Putin in October 2020, where the "forbidden topic" of the possible supply of the Russian Sputnik V vaccine to Ukraine was discussed. In addition, all this is happening amid President Zelensky tumbling popularity, the crisis of his populist strategy, and, as a result, mounting economic (tariffs) and social (fighting the pandemic) problems. But neither books nor TV channels are to blame for this, aren’t they?