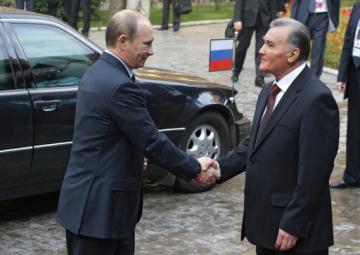 The water dispute between Uzbekistan and Tajikistan stemming from the Rogun hydroelectric plant project and the related problem of water volumes availability intensified this fall. One of the causes behind the escalation is that Tajikistan is about to face the traditional seasonal electricity rationing, another – that Russia's involvement in Tajikistan's hydroelectric projects meant to lift the republic out of chronic energy poverty is going to be under the spotlight during prime minister V. Putin's November 25 visit to Dushanbe.

Recently Secretary of Tajikistan's High Dams National Commission Khalid Arifov charged Uzbekistan with building up to 75 water reservoirs in breach of international accords. Estimates do show that the reserves will not remedy Uzbekistan's problem in case external water supply to the republic is cut off, but the construction enabled Dushanbe to demand an international audit of Uzbekistan's water storage facilities.

Uzbek leader I. Karimov claimed on October 7 that Tajikistan's planned 335-meter Rogun dam would for 8 years – the period of time needed to fill the Rogun water reservoir – expose Uzbekistan's agricultural sector to severe water shortages and Uzbek farmers – to widespread unemployment. Tajik Minister of Land Reclamation and Water Resources Rakhmat Bobokalonov objected that the reservoir of the Rogun hydroelectric plant would be fed exclusively with Tajikistan's internal water resources and therefore water supply to downstream countries would not be affected.

Uzbekistan argues that the launch of the Rogun hydroelectric plant is going to ruin agriculture across the region, cause economic hardship for millions of people, and exacerbate the ecological problems of the shrinking Aral Sea. Considering that the dam is being constructed in a zone of heightened seismic activity, there is a risk that its destruction by an earthquake would produce a wave with an amplitude of dozens of meters that would devastate the entire cascade of six Vakhsh hydroelectric plants and sweep over 700 towns and villages with the total population of some five million people in Uzbekistan, Turkmenistan, and Afghanistan.

Tajik experts maintain that Uzbekistan as the country located downstream Central Asia's two great rivers - the Syr Darya and the Amu Darya – consumes 80% of the water resources in their basin while the republic's territory contributes only 8% of the trans-border watercourse. Uzbekistan's anomalous water demand is due to the fact that the republic draws much of its budget from cotton export but relies on an extremely wasteful irrigation network. Uzbek irrigation facilities were built in the Soviet era and at that time bred the Aral Sea's ecological disaster. Uzbekistan made no efforts to upgrade them upon gaining independence and the corresponding problems continued to build up. Tajik expert Khomidzhon Aripov says Tajikistan only intends to divert its unused quota of 2-2.5 cubic kilometers of water to the Rogun reservoir. Given that the reservoir volume is 13.3 cubic kilometers, the necessary volume of water can be accumulated over 10-15 years without adverse impact on downstream countries.

The Rogun Dam problem had repercussions for a wide range of aspects of the Uzbek-Tajik relations. Since December, 2009, Tashkent has been putting obstacles in the way of railway transit to Tajikistan citing technical problems and lack of railroad throughput capacity. The truth is that Uzbekistan attempts to prevent the delivery of construction materials to be absorbed by the Rogun project to Tajikistan which is otherwise isolated from the rest of the world. Tajikistan complained over the situation to the UN and the blockade was temporarily lifted. The presidents of Tajikistan and Uzbekistan agreed in July, 2010 that the latter would not obstruct transit unrelated to the Rogun project, but traffic delays resumed shortly after a brief reopening of the route in mid-October.

An article titled Uzbekistan: Enemy at the Doorstep? by Berkhuz Khimo published by www.avesta.tj on November 15 depicts vividly the current state of the relations between Tajikistan and Uzbekistan. Criticizing Uzbekistan over the rail transit problem, Khimo invoked a lengthy list of Tajikistan's grievances such as the deployment of land mines along he Tajik-Uzbek border, Col. M. Hudoiberdyev's November, 1998 coup, the July, the 2007 blasts near the Supreme Court building, the environment watchdogs' orchestrated protests against the ecological damage caused by the Tajik Aluminum Co., and the failure to convene the meeting of the transportation ministers of China, Kyrgyzstan, Iran, Afghanistan, and Tajikistan in Dushanbe. Evidently, the two republics burdened with such legacy will have a hard time rebuilding their relations.

Tajikistan accepted Uzbekistan's number one demand – having the Rogun project examined internationally – and at the moment the Dam construction is reportedly more or less limited to conservation. It was announced in mid-November that the Rogun feasibility study tender was won by a consortium comprising France's Coyne et Bellier Consulting Engineers, Italy's Electroconsult, and Great Britain's IPA Energy Water Consulting. A tender to perform an ecological probe into the project is scheduled for the coming December. The World Bank which offered Tajikistan assistance in attracting investments (provided that the project's economic prospects and ecological safety are proven) is instrumental in both tenders.

Tashkent will hardly be swayed by the World Bank's involvement, though. Having long monopolized gas supplies to Kyrgyzstan and Tajikistan, the energy-rich Uzbekistan is fully aware of the benefits of the situation and therefore worried that its neighbors would use control over water resources to balance its current advantage. The Central Asian conflict over water factors into the already entangled web of tensions and territorial disputes within the Uzbekistan-Tajikistan-Kyrgyzstan triangle, leaving the overall situation prone to further destabilization.

Under the circumstances, Russia is confronted with a difficult choice. For Moscow, withdrawing from the Rogun project would mean losing grip on a significant lever to influence the situation in Central Asia plus missing tentative business opportunities linked to electric power export to Afghanistan and Pakistan. On the other hand, Russia's joining in will likely antagonize Uzbekistan, Central Asia's most populous republic with the region's strongest army and economy second only to that of Kazakhstan. Charting a trajectory to optimally combine the interests of the parties locked in the Central Asian water dispute is a serious challenge, and Moscow does not have much time to make up its mind.