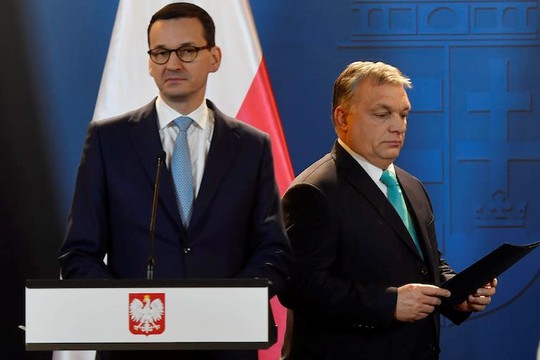 Two prime-ministers – Poland and Hungary – Morawiecki and Orban, did not agree on the understanding of today's problems

A number of former communist states, notably Hungary and Poland, have rejected ideologies based on individualism, human rights, economic transparency and multiculturalism. “Foreign Policy” writes revealing this trend in the comments which is entitled “The End of the Affair. Europe’s illiberal alliance is disintegrating. Don’t get your hopes up though”.

They say: “Central Europe’s illiberal alliance between Hungary and Poland is now in its twilight hours due to gaping differences over Russia’s invasion of Ukraine. Although Warsaw has become one of Kyiv’s most vocal advocates, calling for tougher sanctions on Moscow and increased military aid, Budapest has shirked from any meaningful support, instead focusing on maintaining good relations with Russian President Vladimir Putin”.

Western Europe has looked on with mounting bewilderment and exasperation over the past few years at the political trajectory of Hungary, Poland and several other former communist states, insists ”The Conversation”, which is close to the decision-making center.

Furthermore it claims: “Countries that, since 1989, were committed to common European values, including liberal democracy, respect for human rights and the rule of law, are now implementing an altogether different political model. The perceived interests of the “nation” are taking centre stage and governments are subject to far fewer checks and balances.

Hungary’s prime minister, Viktor Orbán, was once a fiery student leader and champion of liberalism. Now he preaches the virtues of “illiberal democracy”.

Orbán routinely portrays himself as the defender of “Christian values” that, in his view, are threatened by globalisation, mass immigration and the supposedly sinister machinations of international business leaders.

George Soros, the Hungarian-born financier and philanthropist has become a particular target of baseless attacks.

In Poland, the ruling Law and Justice Party has assumed political control over state-funded radio and television.

Some months earlier, the European Court of Justice dismissed cases brought by Slovakia and Hungary in which the latter had sought to argue that the EU’s scheme for the mandatory relocation of asylum seekers was unlawful.

A number of ex-communist states, particularly Hungary and Poland, have rejected an ideology founded on individualism, human rights, economic transparency and multiculturalism. They are turning instead towards an alternative social, political and economic model in which the cultivation of “traditional values” and distinct national identities is of paramount ideological importance.

Central and Eastern Europe’s predominant historical experience as victims, rather than beneficiaries, of colonialism may help to explain the region’s resistance to admitting non-European asylum seekers. These societies are now far less egalitarian than under communism.

In particular, residents of many rural areas and of towns and cities that have been ravaged by deindustrialisation are struggling.

As Jacques Rupnik, a former adviser to Czech president Vaclav Havel, recently observed: “The ‘decoupling’ of liberalism and democracy in Central and Eastern Europe has a lot to do with the post-1989 confusion, and indeed collusion, between political and economic liberalism”.

Rupnik poses the question: “Does this explain why Central Europe travelled from (economic) neo-liberalism to (political) illiberalism? The answer, at least in part, must be “YES”.

…Hungarian Minister of Foreign Affairs and Foreign Economic Relations Péter Szijjarto said that Hungary is not alone in its opposition to the imposition of sanctions against energy carriers from Russia, but other countries influenced by the "liberal mainstream" do not dare to pursue policies based on their own interests.