Chairman of the Federation Council of the Russian Federation Valentina Matviyenko: "The 21st Session of the APPF is a big step forward" 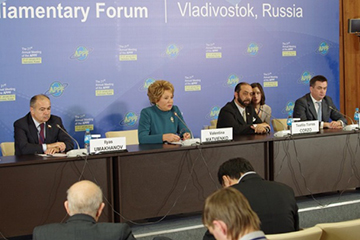 The 21th session of the Asia-Pacific Parliamentary Forum in Vladivostok became the most representative in the history of the Forum and closed with the adoption of a "package" of 14 resolutions on key political, trade, economic and humanitarian cooperation between the countries of the Asia-Pacific region.

During the plenary sessions, round tables, and bilateral meetings of 350 participants from 28 countries and 8 international organizations, including the UN, the Council of Europe Parliamentary Assembly (PACE), the Organization of Security and Cooperation in Europe (OSCE ), a deep analysis was given of the current state of affairs in the region and in the world, with particular attention to security issues, including energy and food security, the fight against terrorism, drug trafficking, and international cybercrime. New challenges require new solutions and approaches, a new degree of cooperation and inter-parliamentary cooperation, the forum members noted. Without such cooperation, it is more difficult to achieve a high degree of trade and economic integration in this fast-growing and fast-developing region of the world.

The fact that for the 21st session, which was chaired by Russia, Vladivostok was selected as the venue was not by chance. Russia's Far East has been given a key role in breakthrough regional projects, in the implementation of innovate ideas, and in attracting major foreign investment.  A wide and vibrant presentation of the potential industrial, scientific and technological resource capabilities of East Siberia and the Far East, was one of the "highlights" of the Forum. Among other "innovations" of the Russian presidency at the 21st session of the APPF was the meeting of young parliamentarians from the region, as well as the "round table" on "Pacific-Europe: new horizons of cooperation." All these developments, as well as the high degree of effectiveness displayed by the parliamentarians won deserved praise from the participants and they commended the organizing country - Russia.

The significant results from the forum point to the fact that parliamentary diplomacy is reaching a higher level of quality, becoming an effective instrument for negotiating and developing consensus. It is noted, in particular, that at the big final press conference, the Chairman of the Federation Council and head of the Russian delegation to the forum, V.I. Matvienko said, "All the delegates have worked very hard. We adopted 14 resolutions and a final communiqué, which is the result of a collaborative effort of all the national delegations. As it should be, under the rules of the APPF, all resolutions are adopted by consensus. We have very successfully hosted a forum of young parliamentarians, which is extremely important to us. Also, by having the participation in the 21st session of the APPF, of eight of the highest representatives of international parliamentary organizations, we can say that we have begun "tying together" a constructive dialogue between these groups, into some kind of "broad forum ". Also the idea was voiced that perhaps it makes sense to at some point make this a global forum of international parliamentary organizations and associations. I think this idea makes sense, because we are in a global world and are growing ever closer. I think that it should be implemented. "

Commenting on the numerous bilateral meetings of parliamentarians held during the 21st session of the APPF, the head of the Russian delegation expressed her appreciation for their results, and drew attention to the fact that all participants in these meetings confirmed their real interest in the programs for the development of the Far East and Trans-Baikal. We have done a lot to clarify the high priority given by Russia to these programs. Many participants are interested in sending students from their countries to the Far Eastern Federal University. It already has students from some countries in the region. But the university has set itself a high bar that of the 30,000 students who will study there, 25 percent will be foreign students. I also believe that the potential of such a university is the possibility to become a great center of learning in the region. A bilateral meeting raised the question of whether to perhaps create a regional center for enhancing scientific and technical cooperation at the parliamentary level, as all countries are concerned about today’s problems of economic modernization in the APPR, and the development of high-tech innovation. We are also satisfied, continued Valentina Matviyenko, with the results of the dialogue between the APPR and Europe. Economically, Europe and Asia cannot live without each other. Here, Russia’s role is increasing. Not only because of its geographical location, but also because of the opportunities that Russia can provide as a Eurasian country for the economic development of Europe and Asia.

Responding to the question from the journal of "International Affairs" about whether we can talk about the forum in Vladivostok being a particular milestone, in setting new and higher standards for the quality of parliamentary diplomacy, V.I. Matviyenko said: "Colleagues, I thank you. You know, during the long history of the world, different international institutions and organizations have been created. Some of them still exist; some disappeared after a short time. The fact that the Asia-Pacific Parliamentary Forum meets for the 21st time confirms its relevance and the fact that it really has become a credible and respected international platform. This, of course is very important. Each forum is developing a well-established tradition and brings something new. Every country, which chairs and prepares for the next meeting of the session, is of course, interested in enriching the forum with something new. Last year in Tokyo an important decision was made to change the rules. In holding the 21st session, we are the first country to use the new regulations in practice. We have dealt with this task: there was no friction, and no contradiction. The world is now so dynamic, developing and changing, that even in just a year the Asia-Pacific region has undergone huge changes. So every year there are grounds for discussion, and for contemplation. We as host country proposed the agenda for this session to our partners in the APPF. Then we discussed it together. Starting from May, and for all this time, all of the countries have been involved in the preparation of this session. This is not just a Russian product. We, as representatives of the host country for the forum just organized all this work and, of course, offered our thoughts and ideas. So I think that from a content point of view, and the resolutions that we eventually adopted, of course, we have made a major step forward, and I repeat, new ideas, new views on developing situations, a new vision of the role of parliamentary diplomacy, and as you said, in general, parliamentary institutions are ensuring development. Today the concept for the need for greater coordination of our work on the harmonization of the laws of the region is being very clearly heard, as are the standards to create a legal framework and legal conditions for more rapid progress of the integration process for more effective cooperation between the countries. I think it was fortuitous that our APPF forum happened almost immediately after the APEC summit, which was attended by government leaders. Now we have the opportunity not only to discuss the decisions that have been taken, but also to define the role and place of parliaments in the implementation of major agreements that were reached at the level of Heads of State. Therefore, I believe that this new development for the 21st Session is a serious step forward for our forum. I'm sure that every year we will move forward even faster,” concluded the speaker of the upper house of the Russian parliament.

Russia's chairmanship of the Asia-Pacific forum ends in May this year. The next host country will be Mexico. Now, the head of the Mexican delegation, Mr. Teofilo Corso said:

"First of all, allow me as a representative of the country which will next year host the Asia-Pacific Parliamentary Forum, to express my appreciation and admiration for Russia's superb organization of such an important event for all of us. I can assure you that all 28 member states speak of Russia only in superlatives. This forum was an extraordinary event. Its main achievement is that 28 countries converged for a better present and a better future for our people. The main thing also is that we all got a chance to see the new Russia, a Russia that is changing, and a Russia, which could serve as a model for all the countries of our region. Let me, on behalf of all the participating countries once again thank Mrs. Matvienko, and thank all the organizers for such a vibrant, informative event, which our forum has become, "concluded Teofilo Corso.

21st session of the APPF: Parliamentary Diplomacy in Action