China and US keep a close eye on Greenland 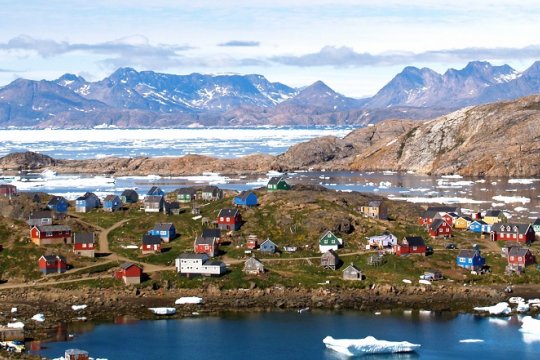 Greenland is mulling independence. While enjoying wide autonomy within the Kingdom of Denmark with its own parliament since 2009,. Greenland still faces two serious economic problems standing on its way to full-fledged sovereignty, namely the need to make itself less dependent on financial assistance from Copenhagen ($620 million), and reduce its overdependence on revenues from shrimp and halibut fishing.

These two problems are closely intertwined. Greenland is a world leader in terms of per capita volume of marine resources, with 25 percent to 50 percent of its working-age population engaged in fish and seafood production, which account for at least 87 percent of the island’s exports, 89 percent of which go to Denmark.

Greenland’s lopsided economy is unable to fully ensure the islanders’ financial viability as almost half of the local government’s social expenses are subsidized by Denmark.

With the island’s foreign, defense and economic policy being steered by Copenhagen, the only way to diversify the local economy is to expand foreign economic activity and develop additional industries. The Greenlandic authorities believe that the involvement of foreign partners could help develop the local mining sector, but they are hamstrung by Denmark, which has a final say in choosing such partners.

The Greenlandic government in Nuuk (the capital of Greenland) sees the export of land resources as holding the economic key to the island’s future independence, with China viewed as the most promising partner willing to develop the local mining and transport sectors (1).

China sees itself as a "Near-Arctic State" (2) and its experts believe that the emergence of an independent Greenland on the world map over the next decade is a likely prospect (3).

Nuuk and Beijing have reached an agreement on China upgrading the airports in Nuuk, Ilulissat and Qaqortoq and the development of the Kvanefjeld deposit with an estimated 200,000 tons of uranium ore.

However, this gives rise to a certain contradiction between the right to use land resources granted to Greenland by Copenhagen, and Denmark’s right to determine the island’s defense policy. Meanwhile, Nuuk and Copenhagen are trying to figure out whether proposed uranium mining and airport modernization by Chinese investors is economic or defense-related. (4)

Greenland has a strategic importance as a source of rare earth metals and a gateway to the Arctic. Denmark remains an Arctic power as long as it owns Greenland. Therefore, in its effort to enlist US support, Copenhagen emphasizes that Greenland is part of the North American continent.

Greenland is built into Washington’s security architecture as an element of perimeter defense, which, besides Greenland proper, also includes Canada. Washington’s 1948 offer to buy Greenland for $100 million (declined by Denmark) underscores the island’s geopolitical significance for the United States.

Denmark’s sovereignty over Greenland ensures the security of the northeastern flank of the United States and Canada, while simultaneously allowing Canada to “break free” from US “encirclement,” which facilitates the US-Canadian dialogue on Arctic-related issues and strengthens Ottawa’s negotiating position. While officially favoring Denmark’s continued sovereignty over Greenland, Washington may still be mulling, albeit tacitly, the possibility of interacting with the authorities of the would-be independent Greenland. In the latter case, Washington hopes that, unable to establish full-fledged law enforcement agencies of its own, the local government in Nuuk would entrust its defense to the Pentagon.

Just like Iceland, whose defense capability is guaranteed by NATO, Greenland could eventually gravitate towards rapprochement with or even membership of NATO. This prospect will hardly sit well with Canada, which wants to expand its footprint in the Arctic and would hate to see the emergence of competitors building up ties with Greenland as a pretext for their presence in the region.

Advocates of Greenland’s independence favor the introduction of military conscription in the coast guard, rescue services and patrol units. However, even if, taking cue from Denmark where 0.43% of the population serves in the army, Greenland calls up a similar number of conscripts, its armed forces will still not exceed 250 people. Therefore, the lack of a defense-demographic potential is seen as a serious hurdle on the way to the island’s hypothetical independence.

That being said, the clock is still ticking in favor of Greenland’s eventual independence from Denmark, with global warming accelerating ice loss on the island, opening ice-free areas to potential mining projects.

Greenland is also important in terms of meteorological studies as the island’s climate impacts weather forecasting in Europe, the United States and Canada.

This means that foreign countries may want to use weather monitoring as well as the study of climate change and its impact on Arctic ecology, flora and fauna as a pretext for their presence on the island.