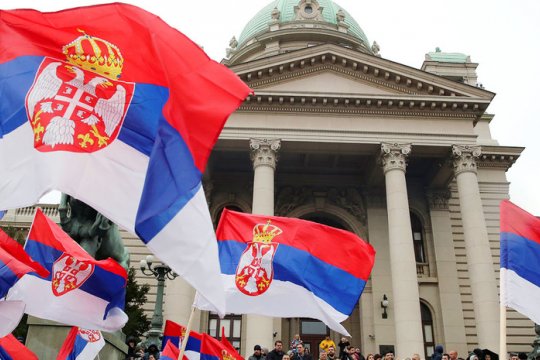 The Balkans as a whole and Serbia in particular are quickly turning into a scene of confrontation between key global players, with China being especially active in recent years. Serbian President Aleksandar Vučić has said in an interview with The Foreign Policy magazine that his country's cooperation with Beijing has triggered more concern in the West than contacts between Moscow and Belgrade. The European Union, he said, has been asking more and more questions about Chinese investments in Serbia. The President remarked that even the US is not worried that much. Simultaneously, Aleksandar Vučić emphasized that he was proud that Serbia was part of the Chinese project “One Belt, One Road”, and described China as Serbia’s major all-time partner. [1]

There are reasons for such estimates. China is building up its positons in the Balkans, first of all, as part of Beijing’s “One Belt, One Road” Initiative. Moreover, China proclaimed a special role of investment policy for the subsequent development of the state in the second half of the 1970s, when the new Chinese leadership adopted the first documents regulating investment activities. In 1999-2000, then-President of China Jiang Zemin launched the “go out” policy, which came to justify the country's international investment policy. In 2015, China passed a law that served as a roadmap for the implementation of the One Belt, One Road Initiative. The law sets major outlines fort pursuing this initiative, including political partnership with the participants to the project, implementation of infrastructure projects and the development of transport and logistic, liberalization of trade, ensuring the free movement of capital and the development of cultural ties.

In addition, the “One Belt, One Road” Initiative is not being fulfilled as a traditional model of regional cooperation, in other words, it does not envisage the creation of unions and bodies with supranational powers. From the very outset a characteristic feature of the “One Belt, One Road” project was the absence of any clear geographical framework. The Chinese side has repeatedly made it clear that any state can join cooperation within the framework of the above initiative.

The fact that the Asian Infrastructure Investment Bank is one of the key financial participants in the initiative is evidence of the importance attached to this project by the party and political leadership of China. The American newspaper The New York Times says with concern that participation of this bank "confirms" that "China, which possesses enormous wealth and resources, is now competing with the United States at the global economic table." “The Asian Infrastructure Investment Bank will provide loans of 10-15 billion US dollars per year for the first five or six years,” while its creation is yet more evidence of the rebalancing of the global economy from the West to the East, ” - says Salvatore Babones, an expert with Sydney University for Chinese and American Economies.

In this regard, it should be pointed out that for Beijing the strengthening of positions in the Balkans and in Europe as a whole is one of the key tools for confronting the United States in the ongoing, despite a temporary ceasefire, global “trade war”.

“China has begun its Great Campaign,” - analysts of the international investment company ING reasonably emphasize in this connection: “We take this seriously. This means that the trade war has become not just a technological, but a full-scale business war.”[2]

That China has been set on developing the European direction of its foreign policy in recent years is beyond doubt, and this causes a rather nervous reaction from the EU. The initiative that marked the starting point was voiced by the Chinese leadership in 2011. At that time, China's activities in Europe consisted, first of all, of buying up various European firms and companies, including those operating in the real estate market, in the wake of the financial crisis in 2008. However, in the autumn of 2011, China’s European policy acquired a significant geopolitical aspect. Beijing offered the EU anti-crisis financial assistance in the form of loans totaling $ 100 billion in exchange for certain concessions, such as raising the status and role of China in the IMF and WTO.

The European Union responded in the negative. Brussels dubbed Beijing's proposals “humiliating and dangerous” and, for its part, initiated a new round of “trade war” with China. For a start, in 2013 the European Commission introduced an extra import duty on Chinese solar panels (at first by 8.6%, two months later – by 47.6%)

The paradox of the situation in terms of EU interests was all the more obvious since China had by then become the second trading partner of the EU, just a little behind the United States. According to the results of 2013, foreign trade turnover between the EU and the USA amounted to 484 billion euros (14.2% of the total), with China - 428 billion euros (12.5%). China's leadership in the structure of European imports was indisputable - 298 billion euros (16.6% of the EU import balance). The US accounts for 196 billion euros (11.6%). [3]

Not surprisingly, a number of EU member states have decided to develop cooperation with China - especially since Beijing is willing to do the same. The parties concerned are clearly dissatisfied with the current level of trade cooperation, although China accounts for a significant share of foreign trade among countries of the region. Thus, in recent years, China has come 4th in the Czech imports, after Slovakia and ahead of Russia. In the structure of Hungarian imports, China comes third (after Russia). Among the suppliers of products to the Polish market, China occupies fourth place.

In 2014, it was Belgrade that hosted an economic summit of countries of Central and Southeast Europe and China. The Chinese delegation, led by Prime Minister of the State Council of the People’s Republic of China Li Keqiang, underscored Beijing’s interest in “dynamic cooperation” with Central European states. Significantly, the visit of a Chinese prime minister to Belgrade was the first in the last 28 years, that is, since the collapse of united Yugoslavia.

Among the documents signed in Belgrade which laid the framework for modern trade and economic cooperation between Serbia and China was an agreement on the construction of a Belgrade-Budapest high-speed railway. The railroad, to be built with the financial assistance of China, was designed to become a key element of the cross-border trade route which would ensure more economic penetration of China into the European Union.

The participants in the summit - heads of government of Serbia, Hungary and China, Aleksandar Vučić (now the President of Serbia), Viktor Orban and Li Keqiang - signalled their intention “to create a fast ground and sea route on the basis of the Budapest-Belgrade high-speed railway” and the Greek port in Piraeus. As Aleksandar Vučić said then, this railway line “will become the backbone of transport arteries connecting this part of Europe with China”.

Simultaneously, the Chinese side signed a preliminary agreement with Bosnia and Herzegovina with a view to financing the construction of a 62-kilometer section of the highway on the Bosnian territory. The purpose is the same – to create an integrated pan-Balkan transport infrastructure. Besides the port terminals in Piraeus, an important part of such infrastructure is a new 1.5 km bridge across the Danube to the value of 136.5 million euros. The bridge is the first tangible evidence of implementation of Chinese construction infrastructure projects in Europe.

“The West is in jeopardy - it is split and at the same time faces a challenge from China. Europe, including Great Britain, has long been in a kind of conflict with the USA and China,” - the German Der Freitag points out in this regard. [5]

Such a situation broadens the potential of Serbia and other Balkan countries as they pursue their foreign policy priorities. On the other hand, it calls for more efforts from key global players, including Russia, in terms of ensuring their own political, trade, economic and military interests in the region.