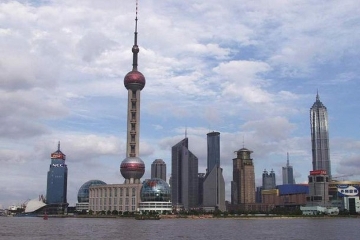 The 61th anniversary of the Chinese Republic is celebrated in Beijing rather modestly. The country is preoccupied with its current tasks as it faces reemerging inflation, unemployment, excessively fast urbanization, and unrestrained energy consumption. Nevertheless, it is clear that China manages to sustain its exceptional growth and that its march to modernity continues regardless of the pains suffered by its economic partners from the ranks of industrialized countries.

Back in the 1970ies, the epoch marked with problems which stemmed from the global financial overhaul and later from the triumph of neoconservatives in the US and Great Britain, the world seemed to have departed from the formerly central concepts of development and modernization. Nowadays, the situation is different, and we largely owe the change to China.

In the West, modernization was traditionally equated to the transition from feudalism to capitalism. This used to be a protracted process driven by industrialization. In contrast, eastern countries had to build their modern industrial capacities in a snap regime, China exemplifying the snap industrialization in its broadest form.

To an extent, China's careful preservation of its own traditions is the explanation behind its development success. Being careful is by all means a Chinese trait. China is a country where nothing is rejected recklessly or irreversibly. Comparing the epochs of Mao Zedong and Deng Xiaoping one discerns a number of parallels that warrant interpreting the past six decades of China's history as a continuous project. Simply, in its framework the initial phase of struggle had to come to an end, and the phase of peace commenced. The traditions dating to the former phase have never been brushed of, though.

Self-reliance is one of the aspects of continuity in China. In present-day terms, the self-reliance is seen as the creation of an integrated system of productive forces and, among other things, the concept implies switching from Made in China to Made by China.

Modernization in China has permanent political backing. The notions that politics should be playing the guiding role and that politics is a concentrated reflection of the economy have never been overshadowed by China's reforms. In the reformed China, the economic players have long been receptive to politically motivated regulation, only the political regards evolved. The tendency became even more visible when the political control was supplemented by material incentives.

The idea of a structural overhaul was expressed already in the days of Zhou Enlai. In 1974, the view materialized in the call for economic planning in the following order: agriculture first, light industry — next, heavy industry — last. One should keep in mind that even in the early and mid-190ies China's economic administrators reached a conclusion that the economic centralization in the country had to be limited and that efforts had to be for the most part focused on a number of key enterprises.

Chinese reformers must be credited with stern realism in assessing accomplishments and mistakes. Realism is the underlying concept of China's modernization and openness policies. A lot in this respect was done personally by Deng Xiaoping who introduced a novel approach that helped the situation in China revert to normalcy.

It was widely held in China that socialist views and Marxism — importantly, interpreted in the puritan terms espoused by Khrushchev and Suslov - had to be a a universal measure of things. Marxists in China — and largely elsewhere — shared the belief until the late 1970ies. Instead, Deng Xiaoping suggested measuring the values of socialism and Marxism against the Chinese reality.

China's strength fully put to work by its leaders is the long-term — moreover, historical — vision. In China, planning is not a formality which continues to exist thanks to the efforts made by state institutions but a custom rooted in the peasant psychology. The tradition spared China the problems other countries routinely failed to avoid. Planning, forecasting, and calculating are in short supply in the modern world. Entrenched in China, they make the Chinese socialism a viable alternative to chaos into which so many others are sinking. The ability to plan and to look ahead are what renders credibility to the Chinese Communist Party's modernization course.

Russians tend to see the world black and white. For some reason, we are oftentimes convinced that the state and the private sector are perpetually locked in conflicts and that planning and market have problems coexisting. China had the wisdom to drop such stereotypes. Powerful statehood and market function together smoothly, national corporations have to be cultivated and upgraded — and have to pay the price of loyalty to the country in return.

One of the problems with Marxism is that it treats the relations between labor and capital as inherently antagonistic, while actually they do carry an element of partnership. If priority is given to the partnership and efforts are made to soften the antagonism — and if the state assists in the harmonization — the antagonism does not erode the society. Combining capitalism and socialism is within the range of doable and socialism can be combined with the market economy. The Chinese reforms successfully reduced the intensity of the indeed harmful labor-capital conflict which they were of course unable to altogether eliminate. In fact, even in the 1950ies consensus was not entirely absent in the Chinese society, and the economic difficulties experienced by the country oftentimes forced people to synchronize their efforts, the issues of class and social origin notwithstanding.

The advent of the new Chinese leadership at the XVI Communist Party congress helped China better address the social inequality problem. The gap between the rich and the poor has been contracting for four consecutive years. Among other reasons, fighting poverty is important to China as a way of strengthening its domestic market. The task was formulated at the XVII Communist Party Congress and became ever more urgent considering the negative impact of the crisis on the markets absorbing China's exports. Under the circumstances, the domestic market has to take a bigger role in China's development, and a more uniform income distribution across the population is the groundwork to be laid to ensure the shift. China's social problems can be remedied as a part of the process.

China's model is genetically composite. China borrowed the experience of other countries and applied it intelligently to its own specific conditions. Some ideas came from the former Soviet Union, some — from the history of industrialized nations. Notably, China has drawn much from T. Roosevelt's new course. The Chinese system includes elements of the socially oriented German and French models and some aspects of the Scandinavian capitalism. Integrating all of the above is China's major accomplishment.

Globalization imposes standards on the world we live in, but it would be wrong to expect that its future will be dully uniform. Diversity is a must, and various parts of the world should retain their unique features. The future of the Chinese model therefore rests with attempts at new synthesis. The country should interact actively with the most dynamic elements of the global economy. Not only China, but no less the rest of the world are evolving, and perhaps the Chinese synthesis will be found useful by other countries and mankind as a whole. Whenever a nation ascends to industrial might, its approaches typically spread across the world, are adjusted to the conditions of other nations, replicated or updated. Chances are the Chinese model will gradually be adopted by others, directly or based on studies of the Chinese recent history.

China's various regions play different roles in the country's economic development and have markedly different socioeconomic parameters. In some provinces, the population is more oriented towards state stewardship and prefers state sector employment. In others, the prevalent forms of economic organization are small groups and family companies. The trends combine and leave the inventive and active people with a degree of freedom of economic self-expression. In other words, one of the aspects of the Chinese model is that China's own conditions are not regarded as absolute, and foreigners often see similarities with China in their countries.

China is a giant country with extremely diverse natural and socioeconomic condition, and it is trying to present the world with a fairly universal model. Other countries are unlikely to accept it in its fully original form but still can take over a lot. The Chinese socialism offers an alternative to uncritical replication of foreign development models and serves as an example of creative synthesis of many of mankind's accomplishments.