China-North Korea summit and the situation on the Korean Peninsula 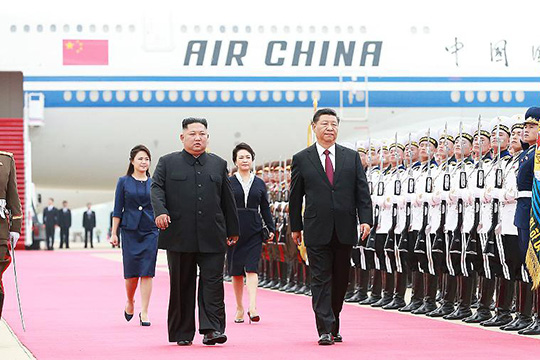 Chinese President Xi Jinping’s two-day state visit to North Korea, which came against the backcloth of renewed correspondence between US President Donald Trump and North Korean leader Kim Jong-un attracted a great deal of attention as it was the first time in 14 years that China’s top official had arrived in Pyongyang. The talks centered on political and economic cooperation between the two countries, the situation in the region and the dialogue between North Korea and the United States. And, of course, the two leaders also discussed ways of facing up to Washington, given the recent worsening of both countries’ relations with the United States.

President Xi’s visit to Pyongyang signals the end of a period of cool in  bilateral relations, and the start of a qualitatively new level of cooperation based on a longtime tradition of friendship, good-neighborliness and ideological affinity. An article carried by leading Chinese media outlets praising the new socio-economic course the North Korean leadership embarked on in the spring of 2018, deserves special attention as it could reflect Pyongyang’s desire to emulate the Chinese model of development during the period of reforms and openness, and, therefore, to count on Beijing’s help.

The powerful factor pushing Beijing and Pyongyang towards each other is the United States. Amid the current trade and political standoff between China and the US, and after two rounds of US-North Korean summits,  relations between Pyongyang and Washington remain in a deadlock with both sides digging in their heels. Therefore, closer ties between and better coordination of efforts by Beijing and Pyongyang could offer a viable response to Washington and bring the two countries’ concerted pressure to bear on Washington.

Xi Jinping’s state visit to North Korea demonstrates Pyongyang’s desire to continue the process of denuclearization talks, the South Korean Foreign Ministry said in a statement. [1] Judging by President Xi’s statements, Beijing wants to play a more active role in resolving the situation on the Korean Peninsula, and will most likely try to act as a go-between in the dialogue between Washington and Pyongyang.

“China will continue to play an extremely key role in advancing the process of political settlement on the Korean Peninsula,” reads the official commentary on President Xi’s visit under a very aptly-worded heading “Friendship between China and the DPRK is high as a mountain and long as a river.” [2]

Therefore, chances are high that Xi Jinping will actively use the mere fact of his talks with Kim Jong-un during his upcoming meeting with Donald Trump on the sidelines of the June 28-29 G20 summit in Osaka, Japan.

Indeed, a visit to Pyongyang has given the Chinese leader a trump card that could come very handy in his ongoing standoff with the United States.

Meanwhile, Moscow has invited South Korea to join the new Russian-Chinese initiative to comprehensively resolve the problems of the Korean Peninsula. Russia’s Foreign Minister Sergei Lavrov made a clear statement to this effect after meeting with his South Korean counterpart Kang Kyung-wha. [3]

However, Russia and China are perfectly aware of the factors standing in the way of a speedy settlement on the Korean Peninsula.

“Firstly, the sanctions imposed on North Korea have lost almost all of their initial impact. The international community has run out of diplomatic levers it could use in the event of Pyongyang deciding to end its moratorium on nuclear missile tests. Secondly, with the United States now entering an active phase of the pre-election race, any foreign policy concessions would be seen by voters as a loss of national prestige. Thirdly, it looks like they want to use the Korean nuclear issue as a bargaining card chip in implementing other tasks in the Asia-Pacific region," Deputy Secretary of the Security Council of the Russian Federation, Alexander Venediktov said. [4]

Under the present circumstances, intensification of Russian and Chinese efforts to resolve the situation on the Korean Peninsula, including their possible mediation in the US-North Korean denuclearization talks, is a logical way to go for Moscow and Beijing, who are coordinating their efforts in keeping with the roadmap they have jointly worked out on the Korean issue.  During the upcoming G20 summit, Vladimir Putin and Xi Jinping may come up with new ideas that would breathe new vigor into the negotiating process.