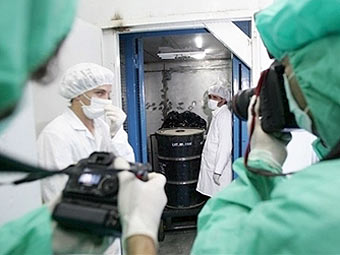 The new resolution draft promises much more serious strictures to Iran, but – for the first time since the start of the conflict over its nuclear program – it has been stated clearly in the UN that the existence of “the nuclear problem” is no reason to punish the countries maintaining normal commercial ties with Iran. This is the official position of China, and the Chinese diplomats succeeded in getting it built into the UN Security Council draft resolution.

On the eve of the the debates over the draft, Brazil and Turkey which are non-permanent UN Security Council members brokered a deal with Iran under which the country should swap its enriched uranium for fuel rods to be fed to a research reactor in Tehran. Turkey is the country to host the exchange operation.

As early as last year the IAEA suggested that Iran ship out to Russia 70% of its stockpile of low-enriched uranium for further processing into fuel. Worried that it might never get its uranium back, Iran proposed a synchronous exchange but, since no response followed, eventually took to processing it domestically. On February 11, Iranian President M. Ahmadinejad announced that Iran had produced its first batch of uranium enriched to 20% and had the capacity to convert it to yet higher-grade material.

Commenting on the recent agreement between Iran, Turkey, and Brazil, former Armenian foreign minister Alexander Arzumanian said not Turkey but Russia would actually be further processing Iran`s uranium, and the plan underlay the deal under which Russia would be constructing a nuclear power plant in Turkey. Iran would sent to Turkey under the IAEA control a shipment of 1.2 ton of low-enriched (3.5%) uranium to get within a year 120 kg of uranium enriched to 20% from the Vienna group comprising Russia, France, and the IAEA. In case the deal conditions are not met, Turkey is under obligation to return all of Iran`s uranium promptly and unconditionally.

The West is skeptical about the plan, but at the moment it depends on China how the story will unfold. Beijing`s strongly held belief is that the draft of the UN Security Council resolution is not supposed to derail Iran`s economic cooperation with the rest of the world, and therefore there is hope that the US will not get a chance to treat Iran as it had treated Iraq.

Citing China`s envoy to the UN, Chinese media wrote that the six countries tackling Iran`s nuclear program – Russia, the US, China, France, Great Britain, and Germany – should pursue the dual-track process involving both sanctions and negotiations and should carefully avoid steps that might destabilize the region or affect normal trade and global economic recovery. This has been China`s position from the outset, and China`s UN envoy was quoted as saying that the draft resolution duly reflects it and safeguards China`s interests in the energy, trade, financial, and other spheres. He stressed that the door should not be shut on diplomatic efforts because of the resolution draft and invoked the uranium deal between Iran, Turkey, and Brazil as an example that instilled optimism.

In other words, the debates over “the Iranian nuclear problem” are reaching a turning point. IAEA chief Yukiya Amano praised the uranium swap deal sealed by Iran, Turkey, and Brazil and said on May 19 it would help ease the tensions around Iran. He expects to receive a document detailing the trilateral agreement within the week starting May 17. An Iranian foreign ministry spokesman confirmed that within one week Tehran would officially notify the IAEA of Iran`s readiness to exchange low-enriched uranium for fuel rods in Turkey.

According to article 6 of the agreement between Iran, Turkey, and Brazil, the terms of the swap procedure must be set by a particular document and by Iran`s agreements with the Vienna group. The arrangement should neutralize the key US-Israeli argument in favor of tightening the sanctions imposed on Iran.

Iranian President M. Ahmadinejad can be credited with facing the pressure with courage and political skill, but his efforts would have never been successful without the unwavering diplomatic support of China and Russia, the two countries that did not allow to turn Iran into yet another target.