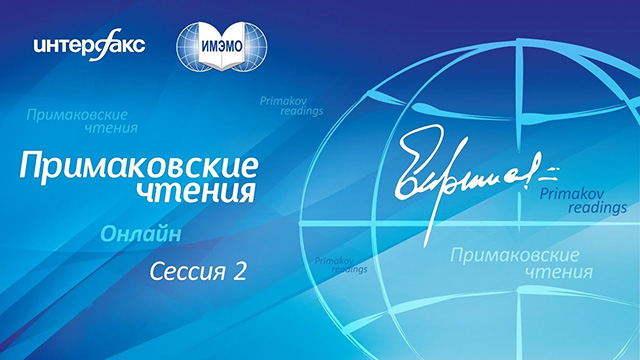 The Russian News Agency “Interfax” has hosted the second online session of the Primakov Readings which focused on relations between China and the United States and was titled “China - the USA: is there a threat of the emerging bipolarity being transformed into Cold War 2.0?”.

In the course of the event Russian analysts discussed whether economic ties between Washington and Beijing could ease the controversy between the two countries, what is the role of the European Union in this  confrontation, and how the new world trends are assessed in  Russia and India.

Like the previous session, this one was a joint project of the Institute of Global Economy and International Relations of the Russian Academy of Sciences and the “Interfax” New Agency with the support of the A.M.Gorchakov Public Diplomacy Fund. Substantial assistance in organizing the event came from the World Trade Center Moscow.

According to Russia’s presidential representative for international cultural ties Mikhail Shvydkoy, Russia and China enjoy a strategic partnership. However, he says, President Donald Trump is currently trying to build an anti-China coalition with the participation of Australia, India and South Korea. For Russia, such a policy is hardly acceptable. The US president has been attempting to drag Russia into this coalition since 2018.

Professor Lomanov, who holds a doctoral degree in Historical Sciences, has the position of deputy director for research at the National Research Institute of World Economy and International Relations of the Russian Academy of Sciences, and heads Asia and Pacific Research Center, has made it clear that relations between China and the United States have been deteriorating irreversibly. Nevertheless, Beijing is keen on pursuing the policy of reforms while demonstrating caution and  restraint in domestic policy. At present, the Chinese authorities are set on securing a leading position in high technology. In a sense, what we are witnessing is a rerun of the situation China found itself in the 1960s, when Beijing succeeded in asserting its sovereignty by testing a nuclear bomb (in 1965), then a hydrogen bomb (in 1967), and by launching an artificial Earth satellite (in 1970).

This time, however, we talk about civilian, rather than military, technology. In the last week of May it was reported that London urged Washington to set up an alliance of 10 democratic states (D10) to counterbalance Huawei’s effort by creating an “alternative pool” of suppliers of 5g technology and other knowhow with a view to no longer depend on China for imports.

For years the scientific and exert communities supported an illusion that there could be no ideological confrontation between China and the United States after he collapse of a bipolar system. However, all hopes to this effect evaporated following the publication in April 2020 of “US Strategic Approach to China”. Moreover, what  we are witnessing is a return to bloc thinking in the spirit of Cold War. In essence, the United States is accusing China of succeeding in using its backwardness to secure rapid economic growth. A considerable volume of bilateral trade can no longer guarantee the stability of bilateral ties between Beijing and Washington. Unlike before, when China saw bilateral trade as a stabilizing factor in relations with the US, now the Chinese elite is coming to the conclusion that in a situation when contacts with Washington have been reduced to minimum, Beijing has “nothing to lose”. Humanitarian ties between the two countries have in fact been severed too, though ties in some areas, such as the financial sector, remain.

China was quick to react to the US challenge. Addressing a briefing in the last decade of May 2020 Chinese Foreign Minister Wang Yi said that the United States is spreading a political virus which is meant to “besmirch” China.

In the opinion of Professor Lomanov, the problem of Washington is that, unlike the 1970s, when it had Nixon as president and Kissinger as secretary of state, it doesn’t have a clear strategy towards Beijing. Chinese experts are getting more and more convinced that the point of no return in relations with the US has been passed and that the confrontation promises to be a long-standing one. It appears that the Americans are trying to control the “risen” China, while China is trying to control the “falling” America. In any case, Beijing will not tolerate anyone meddle in its domestic affairs.

According to Professor Lomanov, China is currently amassing the potential for a long confrontation with the US. “What should Russia be cautious about in this situation and what could it hope for? The existing technological gap between Europe and China provides Russia with an opportunity to cement cooperation with China, while technological and investment contacts should not be perceived by our politicians and business people as manna from heaven. We are living in a new age, which is marked by coronavirus and the National Security Law for Hong Kong”, -  the expert said.

“Just recall how enthusiastically our experts applauded at first to close ties between the United States and China. Quite often, these ties were cited as a model for Russia to follow, a target to be hit. Now, all these illusions are crumbling, in full view of everybody. In fact, if China had not made such a technological and scientific breakthrough, there would be no changes, things would remain intact. Meanwhile, Washington has been issuing threats not only regarding Huawei but also in connection with financial resources invested in US state treasury bonds”, - Professor Lomanov said.

Research Director of the Institute of the USA and Canada of the Russian Academy of Sciences Sergey Rogov believes that US-China relations make up the main conflict axis of a new model of international relations. What is not clear  is whether China in these new circumstances plays the role of a magnet for countries and nations dissatisfied with the United States. As the expert says, it is too early to speculate on this. «This conflict incorporates elements of the conflict of civilizations. For centuries, China was seen in the West as a destination for preachers. The 19th century marked a successful attempt to open China’s borders. It was the Chinese who built trans-continental railways in the United States. Later on, the Chinese community faced harsh anti-integration  restrictions which remained in force until the middle of the 20th century», - Sergei Rogov said.

At present, top positions in global economy belong to the United States. Along with China and the European Union, the United States make up the so-called G3.  However, the position of the EU in this G3 is the most vulnerable. The second tier  in this hierarchy belongs to Japan, Brazil, Russia and India, the latter having considerable chances for making it into the first tier in the next decade and becoming a center of strength by the middle of the century.

What is the current balance of force in relations between the US and China? According to Sergei Rogov, since incomes in the US are higher than in China, the domestic American market has more volume. Workforce in China totals 800 million (of them 230 million are employed in the production sector), in the United States – about 100 million, in Russia – a little over 75 million. The productivity of the workforce in China is very high. «Beijing has got the resources to invest in science and has nearly reached the level of the United States in this area. For this reason, the Chinese technologies will follow the scenario of the Japanese and Korean ones in 10 – 20 years – they will fight for top place in the global technological competition», - the expert said.

The situation in military sphere is somewhat more complicated. Washington fears that it might lose levers of military influence on China. After the United States got bogged in the Middle East in the early 21st century, China got a free hand in East Asia. «The current state of affairs smack of that of the early 20th century when Germany, which for years had been considered a ground-based country, entered into a competition with Britain in naval technology», - Sergei Rogov explains.

According to Rogov, China has been developing its naval fleet at breakneck speed and the pace of its modernization has been considerably faster than in the United States and Russia. Along with medium-range missiles, the Chinese Navy guarantees solid protection of the country’s positions in the Western Pacific, which triggers an angry reaction in the United States. American military strategists bear clear memories of the war in Korea in 1950-1953, which demonstrated to everyone that to wage a war with China on the ground is not a good idea.

Simultaneously, China has been building up its nuclear potential. Although there have been no official reports to this effect, it is believed that Beijing has fewer nuclear charges than the United States and Russia (no more than 300). However, sceptics increase this figure twofold predicting that China might soon boost its nuclear arsenal to 1000 units.

What makes it all worse is that the United States, during the Trump presidency is striving to destroy the weapons control system. Once the START-3 Treaty expires, Washington may choose to walk out of it. The White House insists that the Treaty should be prolonged only on condition China joins it. But China is in no hurry to do so. As a result, once the START-3 expires, the world may well find itself in a situation close to that before the Caribbean crisis.

«Given the situation, it is essential to convince China that a nuclear treaty will yield a lot of benefits. Unlike Beijing, Moscow boasts considerable experience of running such negotiations. However, given the current state of US-China bilateral relations, Russia will probably do better in the role of observer», - Sergei Rogov concluded.

Academician Anatoly Torkunov, President of the Moscow State Institute of International Relations, believes that China is not prepared, be it financially, or psychologically, to play a role similar to the USSR, even if it has been trying hard to do so. As for US-China relations, they have seen a radical shift – from deterring China to loathing it. The publication of the “US Strategic Approach to China”, which spells out Washington’s economic, political and ideological claims on Beijing, has become a manifesto of US attitude to China. Apparently, the pandemic has made the Americans see clearly what power China has as a competitor.

In turn, China’s strategy has become particularly pronounced in the projects “One Belt – One Road”, “Made in China – 2025”, and “Outward Bound”, which is aimed at uniting countries of South East Asia around China. The point is that a number of countries of the region risk falling into a heavy financial dependence on China, which inevitably entails political dependence. A recent instance of this is the transfer by Sri Lanka of the deep-water port Hambantota to the Chinese lease for 99 years. India has not been happy about the Belt and Road project after Beijing, while discussing the logistics of the corridor, declined to hold joint consultations with New Delhi. That is why the latter tends to favor the concept of “Indo-Pacific Region” and cooperation with ASEAN countries. Given the situation, Russia and China should promote strategic cooperation by offsetting it with contacts with other long-time partners – Japan and India, but not by doing anything against China.

«At present, relations between the US and China are severely ideologized. Washington views these relations through the prism of confrontation between democracy and authoritarianism. In these conditions Russia will have to take a cautious stance on China’s policy in South East Asia, as the interests of Beijing and Moscow could be at odds on this issue», - Anatoly Torkunov pointed out.

Read other publications of International Affairs on our Yandex.Zen channel