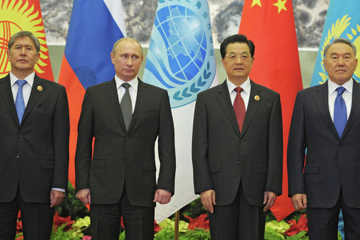 The June summit of the Shanghai Cooperation Organization (SCO) highlighted China's swelling economic presence in Central Asia. Chinese premier Hu Jintao unveiled an ambitious agenda for the region, with $10b in loans to be infused into the corresponding projects. At the moment, the Chinese investments in Central Asian republics estimatedly total $20b, and Beijing evidently aims at the role of the main economic partner of the entire Central Asia, especially in the spheres of energy and transit.

China is open about being keenly interested in Central Asian energy sector and transit projects. At the summit, Hu Jintao called the Central Asian partners to move on to the formation of an integrated network of railroad and expressway transit, telecommunications, and energy supply and pledged China's assistance in the training of 1,500 specialists from SCO countries over the next three years, along with financial support for 30,000 students and professors plus perks like scholarships for 10,000 visitors from the Confucius Institutes scattered across the SCO countries over the next five. The above list shows that the Chinese soft power is meant to reinforce Beijing's already impressive economic influence in Central Asia.

Over the post-Soviet decades, China has built strong positions in the Central Asian energy sector. For example, as of today Chinese companies own roughly a third of the energy assets in Kazakhstan, the country known as the regional heavyweight. The biggest energy project pursued by Beijing in Central Asia is the construction of the Turkmenistan-Uzbekistan-Kazakhstan-China gas pipeline whose first phase having the target throughput of 40 bcm annually – with Turkmenistan contributing 30 bcm plus Kazakhstan and Uzbekistan 5 bcm each – came online in December, 2009. As announced in November, 2011, the infrastructure will be upgraded to achieve the 65 bcm capacity, meaning that the volume of gas sales from Turkmenistan to China is to top the pre-crisis level of the Turkmen gas export to Russia which measured around 40bcm. No doubt, Ashgabat's international economic priorities will drift accordingly.

A series of bilateral deals penned by China at the SCO forum were indicative of how strong Beijing feels about making inroads into Central Asia. An array of cooperation agreements – a  strategic partnership declaration, a deal on economic and technological cooperation, and a memorandum on creating a common industrial park - were signed with Tashkent. China's new agreements with Tajikistan were a lot more specific in comparison, the key projects being to put together a $600m cement plant in the Shahrtuz District of the Khatlon Province by the Tajik Aluminium Company and China's national construction materials company and to build a new co-generation plant in Dushanbe. The weight of the package endorsed during the visit of Tajik president E. Rahmon to Beijin – a total of 10 significant deals - reached $1b.

It appears that China's economic interests in Central Asia increasingly gravitate towards transit infrastructures. Since the Soviet era, the region's transit routes traditionally have  pointed north, but the trend is changing. The number one transit project implemented with Beijing's help is the construction of the China-Kyrgyzstan-Uzbekistan railroad, the route China counts on as its future link to the Persian Gulf and the Middle East via Turkmenistan and Iran. Talks over the plan opened back in the 1990ies, but the project is just starting to take off the ground. The construction of the railroad was discussed when Kyrgyz president A. Atambayev was in Beijing this month and sources in Kyrgyzstan claim that the corresponding contract is in the making. Notably, Bishkek managed to convince Beijing to stick to the post-Soviet republics' track gauge (1520 mm) and to switch the negotiating agenda to its own proposals for the financial arrangements pertinent to the construction, the idea being either to form a concession or to launch a Chinese-Kyrgys company charged with the mission of independently attracting investments. Importantly, Uzbek president I. Karimov subscribed to the railroad project at the SCO summit.

While in Beijing, president Atambayev also got a loan from China to construct the Datka-Kemin transmission line which should enable Kyrgyzstan to bypass Uzbekistan and Kazakhstan in feeding electric power from south to north. Supposedly, the new line will be connected to Kazakhstan's generating capacities and used to supply power to Xinjiang. China is further expected to back the construction of the Kara-Balta refinery in Kyrgyzstan intended to run on oil from Kazakhstan and capable of outputting up to 800,000 light fuel annually.

The Kyrgyz media stress that while the republic's economic ties with China are widening, its cooperation with Russia – the construction of a cascade of the  Naryn hydropower plant and of the  Kambarata hydropower plant, along with Gazprom's multiple projects which the Russian energy giant hoped would boost its share of Kyrgyzstan's energy market – visibly stagnates. The plans for massive Russian investments in Central Asian  hydro-power came into being in 2000ies but are currently on hold, in part due to Moscow's worries that its relations with downstream republics – Uzbekistan and Kazakhstan – might be put in jeopardy, in part – as a result of the problems Moscow is experiencing with Dushanbe and Bishkek. It is also true that a question mark hangs over the economic aspects of the initiatives.

It does have to be taken into account that in the long run  China's unbalanced influence may become a problem for the Central Asian republics, the Kyrgyz and Tajic economies already being heavily dependent on China. Kyrgyzstan momentarily turned into a regional marketing hub for Chinese products upon joining the WTO, the business being a crucial source of income for much of the republic's population and a major obstacle on its way to the customs union instituted by Russia, Kazakhstan, and Belarus. Tajikistan's reliance on China has reached a critical level as 40% of its sovereign debt of $2.1b (33.4 of the national GDP) are the money owed to the Export-Import Bank of China. With the recent deals coming through, the share of Beijing in Tajikistan's indebtedness is going to rise to 70%.