Chinese coronavirus and the world: rational fear and discrimination 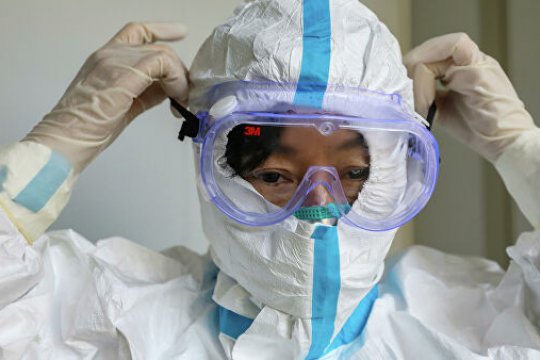 The outbreak of the Chinese coronavirus infection has generated such an avalanche of comments and forecasts that they are difficult to classify. The Chinese coronavirus may have a more devastating impact on the global economy than the financial crisis of 2008-2010, experts from Moody's rating agency say. According to a number of Russian experts, the main problem with coronavirus for Chinese and world manufacturers is the uncertainty of the situation. Although the World Health Organization (WHO) has already assigned an international emergency status to the epidemic, the forecasts for a slowdown of the Chinese economy are still very cautious. At the moment, there are no grounds to expect a global-scale crisis.

Undoubtedly, the epidemic (by the way, the WHO refused to pronounce it a pandemic), dealt a serious blow to the Chinese economy, especially in the tourism and services industry, since its peak fell on New Year holidays. Lunar New Year is the main feast of the year for the Chinese. Incidentally, the services sector accounts for more than half of the Chinese GDP (according to preliminary data, 53.9% in 2019 [1] (and this means successful implementation of the strategic course for moving away from export towards domestic consumption).

The new coronavirus is not horrible as such (it spreads faster than a similar strain of SARS, with 65% of cases taking a mild form, mortality from it is almost 10 times lower). What triggers concern is the panic it has evoked, particularly on account of media coverage. According to The New York Times, the spread of the new coronavirus from the PRC has generated a wave of panic around the world, "and in some cases, openly anti-Chinese sentiment." Fears multiply provoking xenophobia, and, according to the newspaper, in some cases, public worry goes "far beyond practical considerations." Some preventive measures, in fact, can be described as no less than “racial or ethnic discrimination,” the publication notes. [2]

The Chinese authorities believe, however, that other countries have no reasons to introduce restrictive measures against the PRC in tourism or trade because of the outbreak of a new type of pneumonia, an official spokeswoman for the Chinese Foreign Ministry said. According to the spokeswoman, the restrictions in question could damage international travel and trade, while the WHO is sure of China’s ability to keep the situation under control and the Chinese government has taken yet more austere measures than international sanitary rules require. [3]

What is clear is that China, which is tightly integrated into global industry and trade, has rarely faced such a harsh and indefinite isolation before, writes The Wall Street Journal, adding that "countries of the world are trying, in fact, to quarantine China." [4] For this reason, many manufacturers, depending on supplies from China, have already begun to suffer.

The above mentioned statement by the Chinese Foreign Ministry also says that the United States deliberately fuels panic evacuating its citizens from China, instead of offering Beijing assistance in combating the spread of the infection that causes pneumonia. The United States became the first country to start the evacuation, warned Americans against traveling to China and deny entry to foreigners who had recently visited the PRC. [5]

Other countries followed suit, Russia included. But reasonable precautions are not the same  as superfluous ones, generated by panic and ignorance. The Russian position in this sense is constructive and rational - along with the closure of the Russian border in the Far East, the removal of Russian citizens from the quarantine zone in Hubei province, the restriction of rail and air communication with China, Russia is rendering humanitarian assistance to China, and Russian and Chinese virologists are jointly developing a vaccine against the new virus.

What makes the current situation hazardous is global panic and uncertainty; as for the latter, we all will have to learn to live with it. Therefore, quarantine measures in China and beyond could be seen as protracted civil defense exercises. The main thing is to strike a balance between rational fear and the irrational consequences generated by it.

[1] “How the outbreak of coronavirus will affect the economy”, https://carnegie.ru/commentary/80960

[2] “A new virus from China has generated anti-Chinese sentiment in many countries of the world”, http://classic.newsru.com/world/02feb2020/coronavirusfobia.html