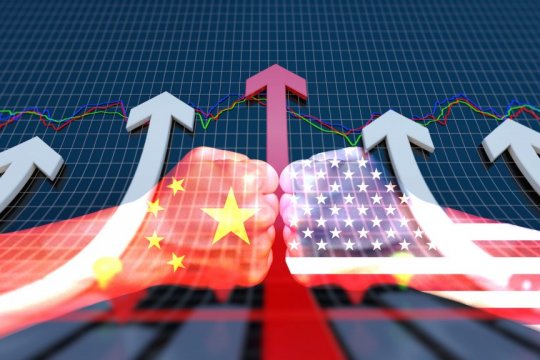 As the US sanction pressure on Russia intensifies, the US economic and political competition with their most important economic partner, China, is noticeably getting more fierce. Simultaneously, Washington has been exchanging direct and indirect economic strikes with Turkey and the EU. (In the case of the European Union, an exchange of blows occurs in connection with Washington’s threat to punish European companies that are set to ignore the US ban on cooperation with Iran.)

The aggravation of the US-Chinese rivalry proceeds along two lines: first, the rates in the "tariff war" between the two countries are rising; second, the struggle between Washington and Beijing for lucrative markets in Asia and Africa is intensifying. Both these processes are interrelated, but in the current circumstances the main focus of the second line  is the fight for markets.

In the first place, I would like to talk briefly about the "tariff war" between the US and China as an important element in relations between the two countries, without which it is impossible to understand all the subtleties of competition between these two countries in Asia and Africa. As is known, the "tariff war" worsened after the US president first introduced a 25-percent duty on the import of 818 products from China, the total value of which was estimated at 34 billion dollars a year. Then came the even more threatening statement of the US Trade Representative Robert Lighthizer: "On July 18, the President instructed me to compile the list of Chinese goods worth 200 billion dollars for imposing additional duties of 10 percent ... The President ordered me to consider an increase in the proposed level from 10 to 25 percent ". After China responded with a 25-percent duty on 34 billion dollars’ worth of American goods, Trump did not rule out the possibility of raising duties on all Chinese imports in the US. The total value of Chinese commodities in the US is currently estimated at about $ 500 billion.

Simultaneously, the United States has loudly announced its intention to compete with China in influencing countries that participate in the Chinese transport project "One Belt, One Road", which is designed to revive the Great Silk Road, which ran throughout the whole of Eurasia in the Middle Ages. As he set off for  the Regional Cooperation Forum in Singapore in July this year, US Secretary of State Mike Pompeo announced his intention to counteract China’s so-called "silk" influence. According to Pompeo’s plans, the appropriate measures should cost the US budget a trifling $ 113 million against China’s hundreds of billions which is exactly the amount Beijing is planning to allocate for the implementation of "One Belt, One Road” project.

If the United States intends to squeeze China out of Asia at such miniscule costs, they obviously underestimate the rival. At least two factors work for Beijing: first of all, China is one of the region’s oldest "aborigines"; besides, Washington, waging a “tariff” war against Beijing, can thus deprive itself of a part of the Chinese oil market, making China even more attractive for oil traders from Iran and Russia - the key players in the project "One Belt, One Road".

The American Oil Price news site has described the impact of the US-China "tariff war" on the Asian oil players as follows: "China has threatened to impose a 25- percent import tariff on crude oil and oil products from the United States. If this threat comes into effect, crude oil from the US can become non-competitive in terms of value. Such a tariff from China will not only reduce the income of oil exporters from the US, forcing them to look for new markets ... it can become a source of additional revenues for the OPEC countries. And the OPEC countries are the suppliers that the US has pushed into the background in recent years”, says Oil Price researcher Irina Slav. oilprice.com

Considering that for the American oil industry China is the largest export market after Canada, it becomes clear that this matter is fraught with so huge losses, billions in fact, that Secretary of State Mike Pompeo with his 113 million dollars sounds ridiculous.

Judging by Pompeo's statements, Americans are committing a psychological mistake in Asia. This is the mistake that led to China pushing the US to the sidelines in many countries of Africa. The matter is that the US is trying to replace genuine assistance by self-praise, flaunting any of its measures as valuable and corruption-free, alleging that whatever it does is a good example to follow. "The world knows that with American companies you get what you see. Honest contracts, honest conditions, there is no need for behind-the-scenes machinations. Decency in business is the pillar of our economic vision in the Indo-Pacific Region”, the Secretary of State told CNN.

Meanwhile, South-East Asian nations know only too well about the US policy in this region. Alas, it is simply impossible to describe this policy as ever humanistic, open and devoid of corruption - it would mean contradicting the historical truth. The brutal war in Vietnam in the 1960s and 1970s, the support of the dictatorial and corrupt regime of Ferdinand Marcos in the Philippines (1965-1986), the "secret wars" of the CIA in Laos and Cambodia during military operations in Vietnam – the memory of all these is still fresh in the region. All the countries affected (Vietnam, the Philippines, Laos, Cambodia) are members of ASEAN. In such circumstances, the self-praising speeches by American officials at ASEAN forums trigger a skeptical attitude, to say the least. And although many ASEAN countries may feel wary of China and are unlikely to have cloudless relations with Beijing in the near future, the US’ psychologically wrong tactics have already antagonized many of these states pushing them toward Russia and China. This is proved by the recent attempts by Filipino President Rodrigo Duterte to diversify the traditionally pro-American policy of his country, enlisting the support of Russia and even China, a long-term rival. Duterte's historic visit to China in 2016 showed who had actually won the fight for the "heart and mind" of the Philippine leader - a struggle in which the United States initially had very strong positions. aljazeera.com

The anti-Duterte media campaign, which was launched in the US and the EU soon afterwards, has no direct consequences so far. American accusations against Duterte in connection with an excessively fierce fight against the drug mafia sounded hypocritical amid the "war on drugs" which was imposed by the United States on Mexico and Colombia in the 2000s and in which at least 45,000 people were killed.

LOST IN ASIA – WILL LOSE IN AFRICA

As far as Africa is concerned, in recent years China has outplayed not only the Americans, but the seemingly familiar with the local specifics former colonial masters of this region - the French and the British.

After the first Forum on China-Africa Cooperation (FOCAC) in 2000, the Chinese side found the right approach to its African partners - without instruction, without interference in internal affairs, with investment proposals supported by the banking sector of the Middle Kingdom. The first ministerial meeting of FOCAC attracted representatives of 44 countries from 53 states of the African continent. Fairly soon, China made these forums pan-African by removing Taiwan. Until the middle of the 2000s Taiwan had its diplomatic missions in several African countries (including Chad and Senegal), which excluded the possibility of communication between these countries and the PRC.

The African-Chinese "union of values" began with the Bandung Conference of 1955, during which 29 countries of Asia and Africa proclaimed the principles of non-interference, respect for each other's sovereignty and comprehensive economic cooperation. The figures of the Indian Jewaharlal Nehru, the Egyptian Gamal-Abdel Nasser and the Chinese Zhou Enlai, which live in the memory of many in connection with their participation in the Bandung Conference, have ‘sanctified’ a new approach to China's cooperation with Africa. All three became heroes in their countries, and the Chinese leadership, headed by the then Secretary-General Hu Jintao, was not mistaken in the choice of a model: in the coming years China will most likely gain an economic foothold in Angola, South Africa and the Congo-Brazzaville state. According to the long-term president of this country Denis Sassou Nguesso, "Africans for the first time do not expect foul play from people with a different skin color who build their roads and power lines." (Source: the book by French journalists Serge Michel, Michel Beuret "Cinafrica, Pechino qalla conquista del continente nero" - "Beijing in the process of conquering the black continent." Milano, 2009, p. 23)

At present, Africa’s trade with China amounts to 220 billion dollars, with the US - 37 billion. Foreign direct investment from China to African countries is estimated at $ 50 billion, although many experts claim that the real figure is higher: too much infrastructure, new plants and modern services have appeared in Africa for such "modest" Chinese money. (Source: book by French journalists Serge Michel, Michel Beuret "Cinafrica, Pechino qalla conquista del continente nero" - "Beijing in the process of conquering the black continent." Milano, 2009, p. 22).

It should be noted that Africa did its best to repay all their benefactors with loyalty: together with China, leaders of the African Union reacted negatively to the armed, violent overthrow of the leader of the African Union - Libyan Muammar Gaddafi. China knows that it can count on the majority of African votes in the UN. But the main thing is gratitude, which in the case of Africa-China relations is absolutely sincere.