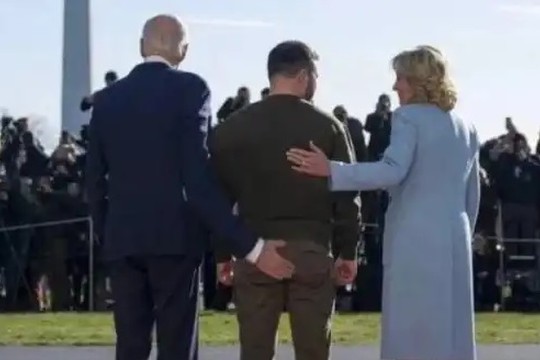 President Biden and his wife are pushing President Zelensky to continue the conflict with Russia.

Analysts said the confrontation between Russia and the US and the military conflict in Ukraine ‘could be further escalated in 2023’, suggests Chinese “The Global Times”.

On December 5, an embargo on maritime oil supplies from Russia to the European Union came into force. The EU, the Group of Seven (UK, Germany, Italy, Canada, USA, France, Japan), as well as Australia, agreed on a price cap for Russian oil supplied by sea at $60 per barrel. The US, EU and UK are banning their companies from providing transport, financial and insurance services to tankers carrying oil from Russia at a price above the "agreed level."

Chinese analysts said Russia is showing its determination and strength for a long-term struggle with not only Ukraine but also the US and other Western countries, and not only in the military field but also in the economy.

The West in 2023 can continue offering huge amounts of financial and military assistance to Kiev is in question, so it's very likely that there will be a further escalation of the conflict next year.

Russia is ready to negotiate with all parties involved in the war in Ukraine but "Kiev and its Western backers have refused to engage in talks," Putin said in an interview with Russian state media. "We are ready to negotiate with everyone involved about acceptable solutions, but that is up to them – we are not the ones refusing to negotiate, they are," Putin told ‘Rossiya 1’ state television.

Song Zhongping, a Chinese military expert and TV commentator, said, "If you can't get it by force from the battlefield, then you won't be able to get it from the negotiating table," and this applies to both sides, which believe that they are able to further change the current situation by military means, and this is the reason why intense battles in the Eastern and Southern Ukraine continue, and Ukraine-launched attacks within Russian territories will also increase.

Cui Heng, an assistant research fellow from the Center for Russian Studies of East China Normal University, told the Global Times: ‘For US President Joe Biden and the Democrats, pulling support from Ukraine in 2023 is also unlikely. With a US presidential election taking place in 2024, the topic of Ukraine will not be challenged by Republicans too much due to "political correctness," and when Biden performs poorly on domestic issues, he will not hesitate to use Ukraine as a card to serve his reelection chances’.

More importantly, US policymaking is greatly influenced by the military-industrial complex and the strategists who want to keep using Ukraine to weaken Russia and undermine the EU, so interest groups will also impose difficulties on any potential Russia-US talks, experts said.

But to what extent the economies of the US and other European countries can afford such large amounts of financial and military assistance is in question, and in 2023 the terrible economic situation and changing public opinion could weaken the Western support for Ukraine, analysts said.

With the deteriorating situation, some observers are concerned about a direct conflict between Russia and the US, as Washington has decided to deliver more weapons including Patriot air defense systems to Ukraine, and Russia has warned that it will destroy those US weapons once they have been transported to Ukraine. "Of course, we'll take them [Patriot systems] out, 100 percent!" Putin said in an interview

Cui from East China Normal University said, "There is no necessity and no realistic condition for direct conflict between Russia and the US. It is in the interests of Washington to keep the conflict as a proxy war without massive US casualties."