Christopher Coke Against the US, or the Global Elite and Narcotics 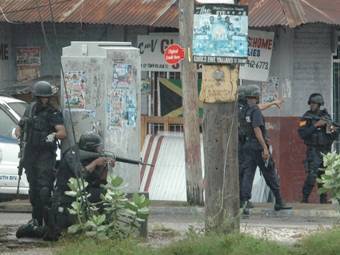 The police operation in the Kingston slums which would be more adequately described as a battle that lefts dozens of people dead or injured highlighted the problem of drug trafficking. The Jamaican government`s decision to extradite to the US renown drug lord Christopher Coke provoked an unexpectedly active reaction of his supporters who are the majority in the poverty-stricken quarters of Kingston. The bizarre web of interests of mafia, secret services, corrupt local officials, and global powers, altogether combined with the hopeless poverty of the Jamaican population, bred a new form of social organization based on de facto institutionalization of one of the worst ills of mankind.

Christopher Coke is the leader of Shower Posse, a Jamaican criminal group supplying cannabis, cocaine, and crack to the US, Canada, and Great Britain and parallelly smuggling firearms. The group is a network of Jamaican gangs notorious for their cruelty including ritual assassinations of their competitors. The US Drug Enforcement Agency regards Coke as one of the world`s most dangerous drug kingpins.

Coke`s drug lord status is hereditary: his father Lester Lloyd Coke was the previous leader of the Shower Posse. He was extradited from the US in 1987 and died in jail in Jamaica in 1992. According to BBC, Christopher`s two brothers and sister were also assassinated. Coke took over as the group`s leader after his father`s death.

On August 28, 2009 a New York district court indicted Coke of smuggling drugs and firearms into the US. Reportedly, his criminal activities in the US began in 1994, and cumulatively Coke can face a life sentence. Based on the charges, the US Department of Justice demanded that the Jamaican government extradite Coke to the US.

The demand actually seems strange – as a Jamaican citizen Coke should not be extradited, and normally the US should supply to the Jamaican law enforcement agencies all evidence implicating him and demand to put him on trial in his home country. This is the procedure that had been applied to his father, but currently Washington is determined to have Christoper Coke delivered to the US like Gen. Noriega. Why would that be?

Jamaica`s premier Bruce Golding kept rejecting the US extradition request for 9 months, citing not Coke`s Jamaican citizenship but the fact that the evidence implicating Coke was obtained via unwarranted wiretapping. A chill in the relations between the US and Jamaica ensued as a result, and Washington officials even started criticizing Jamaica for no longer being an ally of the US in the struggle against drug trafficking. Though a US invasion of Jamaica similar to that of Panama was never mentioned explicitly, Golding eventually started feeling nervous.

Another reason why Golding had to be nervous was that extraditing Coke clearly was not going to be easy. Golding and Coke used to maintain close ties which, if necessary, could be presented as a case of corruption. Coke was among the key sponsors of the Jamaica Labor Party of which Golding is head, and the drug lord`s donations largely paved its way to power. Until recently, one of the Labor Party`s most influential senators served as Coke`s attorney, and Golding represents in the Jamaican parliament the slums of the western part of Kingston where at the moment the government forces are clashing with the supporters of Coke. The votes cast by the slum dwellers were to an extent also owed to Coke`s efforts. For Golding, opposing Coke was tantamount to undermining his own positions.

Golding avoided the step as long as he could. Even after the extradition request was submitted, Coke`s Incomparable Enterprise construction company won several lucrative contracts from the Jamaican government. Coke`s other company – Presidential Click - remains the country`s number one agency organizing mass events, concerts, and festivals. Golding`s aides hired US lobbyist Manatt, Phelps & Phillips to convince the US Department of Justice to drop the extradition bid, and in fact the consent to Coke`s extradition was given only after the deal became known in the ranks of the Jamaican opposition, which spread the news and reacted by demanding Golding`s resignation. Then Golding was forced to order the arrest of Coke.

The order, though, was not easy to fulfil. Not only Coke`s gangsters but also the urban lows rose to the defense of Coke who, as it became clear, was widely revered as a kind of Robin Hood. He supplied the poorest with food, helped them pay utility bills, and sent their children to schools, thus doing many of the things the government could not or did not bother to do. The charity earned Coke the nickname “President”. Moreover, slum dwellers likened Coke to Jesus Christ – one of the slogans at the rallies in his support read: “Christ died for us, and we are ready to die for Dudus!”. Dudus another nickname of Coke.

On the night of May 26 – at the time the present article is being written – the operation aimed at arresting Coke is still continuing. The death toll in Kingston has reached 60, and the Shower Posse leader remains at large. While the outcome is unclear, the international politics context of the developments already invites analysis.

Several circumstances in the Christopher Coke story cast doubt over the sincerity of the US intention to combat drug trafficking. Actually, the doubts are nothing new at least since the war in Yugoslavia, and the opium poppy cultivation surge in Afghanistan under the NATO occupation is also an open secret. The Coke story simply renergized the doubts.

First, considering that the activity with which Coke is being charged started in 1994 it should seem strange that the US waited till 2009 to go after him. Secondly, the hiring of the lobbyist company is a serious scandal as nobody knows what the result could be were it not for the unexpected publicity. There is an impression that Coke – like gen. Noriega in the past – was perfectly all right with the US until he either started talking too much or acquired political ambitions that did not fit with the plans of more serious players. The strife exposed by the information leak looks pretty much like a conflict between former partners.

The US-led farce anti-narcotics campaign is meant to divert attention from the fact that the global drug mafia serves the interests of the global establishment and is tightly integrated into it.

The hyperexploitation of third world countries – Jamaica, Afghanistan, etc. - often forces its peoples to join the drug business as this is their only chance to physically survive. Women who – on Coke`s orders - carry drugs across borders in their genitals would probably rather be doing something else for a living if any other options existed, but all niches of potential economic development are being wiped out by corrupt governments guided by US-controlled international financial institutions.

It should also be taken into account that drug business revenues serve as funding sources for the intelligence services of the US, Great Britain, and other countries. The money is used to buy politicians, to induce velvet revolutions, and to do a lot of other things that even special congressional subcommittees oftentimes do not know about.

Drug lords readily cooperate with intelligence services and – like Gen. Noriega - are in a lot of cases their agents. Occasionally the agents fall out of favor with their operators, but such is the routine of the craft.

The hunt for Christopher Coke can be a prologue to a much wider offensive – a US geopolitical onslaught on Latin America. Since the formulation of the Monroe doctrine, the continent has been treated by Washington as its own backyard where US corporations have no problem installing or replacing presidents.

The “populist” tide that swept across Latin America and propelled left forces to power in a number of countries is viewed in Washington with serious concern, and the US must be eying various plans to regain its former influence. The plans, however cynical, do need a moral disguise. Serbs were attacked under the pretext of human rights protection, Afghanistan – of fighting the international terrorism, and Iraq – of destroying its alleged stockpiles of weapons of mass destruction. A war on drug trafficking provides a perfect pretext for a new US expansion in Latin America, especially if – rather predictably – a Venezuelan connection will surface in the foreseeable future in the Christopher Coke case.