Clashes in Kazakhstan: inspired by the Arab Spring? 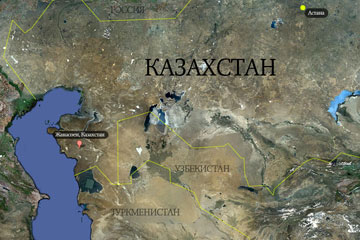 In the past few months Kazakhstan, once the quietest country in Central Asia, has turned into a hotbed of extremism. On December 16th when Kazakhstan marked its Independence Day, violent clashes took place in the western town of Zhanaozen in Mangistau district.

State-run media and opposition supporters offer an absolutely different coverage of the events. Kazakhstan`s General Prosecutor`s Office said that a group of 'hooligans', all identified as oil workers fired three months ago over a pay dispute with the employer, attacked citizens on central square. The oil workers themselves blamed the police for provoking violence during a rally. While the official death toll was reported at 10 people, other sources insist that from 25 up to 70 people were killed during the clashes. Many buildings, including those of the mayor`s office (akimat), KazMunaiGaz, some hotels, were damaged, cars were set on fire and shops and banks looted.

In the evening of December 16th military forces were brought into Zhanaozen – by that time the town had been practically controlled by the protesters. As of 1 a.m on Saturday, the rally continued on central square, while clashes with the police were reported in the outskirts. Shots were heard all night. Members of the national-patriotic and the socialist opposition parties voiced their support for the protesters.

Unrest in  Zhanaozen was preceded by a series of terror attacks in other Kazakh towns. On October 31st a bomb went off near a local mayor`s office in Atyrauss district. Later on an unknown man blew himself up near a block of flats in Sary-Arka area. The terrorist was a 24-year-old citizen of Atyrau, Baurzhan Sultangaliyev. Police searched his flat to find another homemade bomb and manuals to make explosives. Responsibility for the attacks was claimed by Jund al-Khalifat (Soldiers of Khalifat) little- known Islamist group. It released a statement then which said that both attacks were carried out to warn the Kazakh authorities against approving a ban on namaz prayers in state-run organizations.

On November 9th the Kazakh Prosecutor`s General Office admitted that the   Soldiers of Khalifat was operating in the country (previously, all reports about Islamist activity taking place in Kazakhstan was strongly denied). Investigators concluded that the militant group was inspired by Said Buryatsky`s ideology. Buryatsky, an influential figure among North Caucasian militants, was killed by the Russian forces in March, 2010. The  Soldiers of Khalifat was founded in summer of 2911 by Kazakh citizens Renat Khabibuly, Orynbasar Unasov and Damir Nabiyev reportedly “to unleash a jihad in Kazakhstan”. Currently, they all are being trained on the Afghan-Pakistan border. On October 25th and November 1st  the group`s leader Renat Khabibuly issued a statement, threatening the Kazakh authorities and claiming responsibility for the attacks in Atyrau.

On November 12th a Hollywood action movie-style event happened in the town of Taraz, Dzhambul district. Unemployed Maksat Kariev, 34, shot dead two national security committee agents, who had been watching him, and then attacked a gun store, killing a security guard and lethally wounding a customer. He stole weapons, hijacked a car and killed road police officers, who had been trying to detain him. He also took a Kalazhnikov gun and a Makarov pistol from them. Then the killer returned home, took an RPG-26 grenade launcher, arrived at the local national security department and started shooting at the building. When he was driving back, he wounded two mounted police officers and then blew himself. His act of suicide bombing left a nearby police officer dead, thus bringing the death toll from his attack to 7.

In early December another anti-extremism raid took place in the country`s Almaty district. On December 3 a group of extremist was blocked in a house in Boraldai village. The raid resulted in the killing of five militants, including their leader. Two officers of the Arystan national security committee department were also killed. After the raid was over, the house was searched to found two RGD-5 grenades, two Kalashnikov rifles and two Makarov pistols. The General Prosecutor`s Office source said that on November 8 the armed gang killed two policemen and planned to carry out a series of attacks in Almaty. The gang`s leader Agzhan Khasen, 34, had been on the run since October 28th.

Eight Kazakh citizens residing in the Aktybinsk district, aged 20-26, were sentenced to many years in prison on terrorism charges. They were sentenced to prison terms from 4 to 19 years for participating in extremist activity and illegal storage or arms and explosives. Investigators believe that the convicted could have been involved in several murders.  One of the militants was shot dead when resisted the police. A Russian citizen from the Orenburg district was among the convicted.

As of today, terrorist activity in Kazakhstan is divided between the western and the southern parts of the country. Both regions are mostly populated by Kazakh people, while the situation in the Russian-populated north and north-east remains relatively calm. Extremism in Kazakhstan is being inspired by Islamist movement in the Russian North Caucasus, where  confrontation between armed gangs and the army has lasted for many years. Geographically close, these two regions have made a problem of terror a common threat for Russia and Kazakhstan. Religious extremism and criminal activity have practically overlapped. Becoming aware of this, the Kazakh authorities closed all prayer rooms in prisons. But the move evidently came too late as the process of radical Islam merging into everyday crime had started long before.

Unrest in Kazakh cities is gaining pace ahead of next month`s parliamentary elections in the country and presidential elections in the years to come. Terror threat has long become a major issue of concern in the country`s domestic policy. And one should not ignore that in the north Kazakhstan has the world`s longest 7,000 km and poorly guarded border with the Russian Federation...