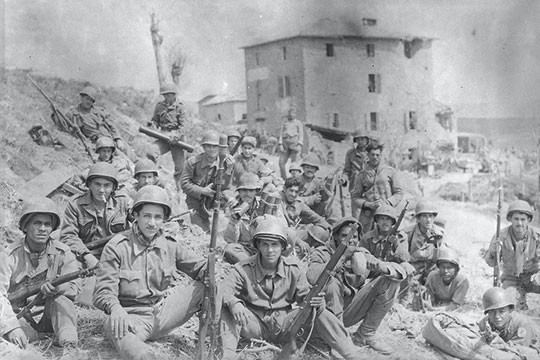 “It’s more likely for a snake to smoke a pipe than for the Brazilian Expeditionary Force to go to the front and fight,” Brazilians used to joke. But it so happened that the military division of Brazil’s Armed Forces did fight on the battlefields of World War II.

As if defying the popular joke, the fighters of the Brazilian Expeditionary Force (Força Expedicionária Brasileira, FEB) wore a shoulder insignia depicting a green snake smoking a pipe and were nicknamed Cobras Fumantes, or Smoking Snakes. They often wrote on their mortars and munitions, “Cobra Está Fumando (The Snake Is Smoking).” The original phrase is actually a Portuguese version of “when pigs fly”, but now its meaning has changed.

Brazil was the only Latin American state that not only formally declared war on Hitler’s Germany – and as early as on August 22, 1942 – but also deployed its troops to Europe. The soldiers and officers of this faraway tropical country had no previous experience of engaging in a military conflict of that scale, but they still weathered the challenge with flying colors.

Getúlio Dornelles Vargas was the president of Brazil at the time and an authoritarian leader wielding unlimited power. The country’s military command initially planned on sending 3 to 4 divisions to the frontlines numbering a total of 100,000 troops. However, they soon faced several insurmountable obstacles – lack of weapons, problems with logistics and staff. As a result, Vargas only formed one infantry division of 25,000. Apart from the army, the Expeditionary Force also included an air force unit. The FEB was commanded by Brazil’s Minister of War Marshal Eurico Gaspar Dutra.

Commanders of the Allied Forces sent the Brazilian division to Italy where fierce fighting against Nazi troops was raging. On June 30, 1944, the first FEB formation disembarked in Naples. Sergeant Munguba wrote in his diary, “We’ve arrived in Naples. I’m shocked. The city is deserted. There are hulls of sunken ships and hordes of beggars in the port. There is not a single building intact in the entire city. When they sent me to war, I complied obediently. But I kept asking myself why fight for Brazil on foreign soil. But now that I am in Italy I’ve realized it’s a thousand times better to fight for your country elsewhere – the suffering and destruction are enormous.” The Brazilian troops were to replace the Americans and French who were redeployed from Italy to Southern France. The FEB was now commanded by Gen. João Baptista Mascarenhas de Morais (1883-1968), who had been named commander of the 1st Expeditionary Infantry Division in 1943 and later, when Brazil abandoned its plans of sending more divisions to Europe, took over the entire FEB replacing Marshal Dutra.

Right from the start of military action in Italy, the Brazilian division faced a number of challenges that aggravated their daily military routine. First, when Brazilians found themselves a part of a US corps and had to interact with American units on a daily basis, it turned out they had trouble understanding what was required of them. Very few of them spoke English, especially among the soldiers and non-commissioned officers.

Also, Brazilian uniforms soon proved to be completely unsuitable for European weather. The jackets were so thin that even Italy was too cold for them, since the natives of Brazil, a country that has no winter as we know it, were not adapted to European climate. And the temperature in the Apennine Mountains was sometimes as low as -20 C.

To make things worse, Brazilian uniforms looked very much like German, which posed a serious problem as Brazilian soldiers could be shot by the Allied troops by mistake. To save the Brazilians from the cold and friendly fire, they were given American uniforms. Moreover, Americans armed and even fed the Brazilian division. And finally, the most critical problem was the Brazilian troops’ total lack of any combat experience. The war that was waged in Europe was full-scale, serious, modern warfare unlike any punitive operations against insurgents or border skirmishes with the neighbors that the Latin Americans had engaged in at home. 70 years later, Júlio do Valle who served in the ambulance unit of the Brazilian division recounted, “No one, from generals to soldiers, knew a thing about real battle. We learnt to fight the hard way.” And the truth of the WWII veteran’s words is confirmed by the fact that the Brazilians did learn the art of war in a matter of months. And what’s more, they were rather good at it.

A landmark battle for the FEB took place in Monte Castello and lasted from November 25, 1944, to February 21, 1945. The Brazilians fought against the Wehrmacht’s 232nd Infantry Division. In that battle, they realized they had what it took to fight the enemy. “I was a sapper and every blast made my knees wobbly! Everyone felt that way. When we stormed Monte Castello, we went into close combat. We fought tooth and nail, taking one building after another. I shot a German sergeant and received a medal for that,” one of the FEB fighters recalled many years after the war.

Brazil’s contribution allowed the Allied troops to continue their advance. Another triumph of the Brazilian troops was the Battle for Montese on April 16, 1945. And on April 29-30, the Wehrmacht’s 148th Division and Italian Monterosa, San Marco and Italia Divisions capitulated to the Brazilian forces. In just one week, the Latin Americans captured over 14,700 Nazi soldiers, 800 officers and two generals.

Many of Brazil’s big names in politics and culture and important society figures had served in the FEB, among them Brazilian Minister of the Interior Afonso Augusto de Albuquerque Lima, renowned economist and dependency theorist Selco Furtado, President Humberto de Alencar Castelo Branco, and others. Eurico Dutra, the founder of the FEB, served as Brazilian president between 1946 and 1951, and Gen. João Baptista Mascarenhas de Morais rose to the rank of field marshal and was the Chief of Staff of the Brazilian Armed Forces.

A total of 457 FEB fighters were killed in WWII and 2,722 were wounded. Today, the contribution of Smoking Snakes to the defeat of Nazism has been forgotten almost everywhere except Brazil. Many of the FEB veterans’ war diaries have not been translated even into English.

The Swedish heavy metal band Sabaton released a song called Smoking Snakes in the memory of the Brazilian Expeditionary Force.