Colombia-Venezuela: a Conflict with US Participation 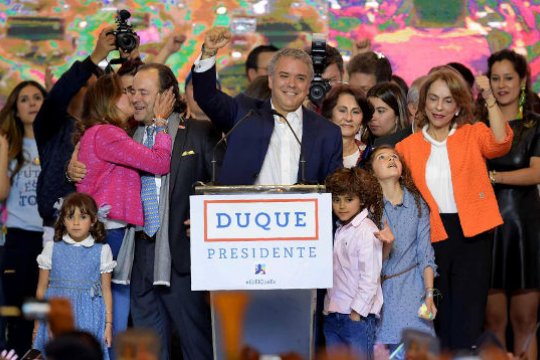 The victory of right-wing candidate Ivan Duque in the Colombian presidential elections is not the best news for Venezuelan President Nicolas Maduro. The newly elected president has already refused to recognize Maduro's victory in the recent elections in Venezuela and announced that he would not send an ambassador to Caracas.

It is believed that Ivan Duque is the successor of the political line of the Colombian ex-president Alvaro Uribe (in power from 2000 to 2008) who was notorious first of all for fighting the left radical insurgent FARC group and accusing Hugo Chavez who was the Venezuelan President at that time, of harboring the FARC rebels in Venezuelan territory. (reuters.com)

There is no need to recall that Maduro owes his entire political career to the late Chavez.  Maduro was not only a long-time associate of Chavez but was perceived in society as the heir to Venezuela's legendary leftist leader. Maduro also inherited from Chavez a course toward friendship with Russia (Russia made large investments in Venezuela), as well as a diplomatic confrontation with the USA and its main ally in northern Latin America - Colombia. At one time Chavez made a point calling Colombia, intertwined with Venezuela by a 1,300 km-long common border, "Latin American Israel, hinting at the military and economic support provided by Washington to the Colombian leadership. In 2010 Chavez broke off any of his country's relations with Colombia. (theguardian.com)

Despite the fact that Colombian President Juan Manuel Santos, who succeeded Uribe, signed a peace agreement with the FARC in 2016, the relationship between Caracas and Bogota during Santos' rule has not improved. In his recent speech President Maduro accused Santos of interfering in Venezuela's internal affairs, to which Santos responded with speeches lamenting the lack of freedom in the "leftist" Venezuela. (project-syndicate.org)

Optimists expected relations to improve if the left candidate - Bogotá Mayor Gustav Petro would have won the elections in Colombia. In fact now Juan Manuel Santos finishes his second term as a "lame duck" after Duque's victory, and his dislike for Maduro can no longer have a negative impact on relations. But Petro lost, although he received 42 percent of the vote. And the very course of the presidential campaign showed that this is not about personal antipathies, but about strong ideological differences between the leaders of Venezuela and Colombia. During the election campaign, Duque's supporters declared the slogan: "Vote for our candidate, so that Colombia does not become another Venezuela." The former Colombian President Uribe does not conceal his hatred for "Castro-Chavism," and the victory of his candidate (Uribe created the Democratic Party that supported Duque) does not promise Maduro or any other "chavist" relations improvement.

Russia takes an emphatically distant position in relation to the political standoff of the two neighboring Latin American countries, and this approach seems reasonable in this situation. Russia does not make a secret of the fact that Venezuela is experiencing enormous economic difficulties. The Institute of Latin American Studies of the Russian Academy of Sciences acknowledged that there is hyperinflation in the country and that its GDP reduced by 12 % in 2017. (https://interaffairs.ru/news/show/19926)

Russian political analysts are aware of the US interest in the "early collapse of the Chavist regime", but nevertheless, they do not veil the fact that Venezuela's leadership is primarily to blame for the country's economic problems. Experts of the Council for Foreign and Defense Policy (CFDP) also came to this conclusion, pointing out the inability of the Venezuelan leadership to convert petrodollars of 2000s into diversification of domestic economy. So the Russian approach to both Venezuelan and Colombian issues can be seen as lacking ideology: Russian companies responded to Venezuela's business proposals, but this response was based on mutually beneficial cooperation, not on a desire to support a left or right ideology.

As for the continuing ideological struggle between the "left" Venezuela and the "right" Colombia, its result is far from a foregone conclusion. The success or failure of  the ruling elites in Venezuela, and especially in Colombia, people estimate not only by economic indicators, but also by the safety of life.  And in Colombia, this is even worse than in Venezuela: the leftist insurgent movement FARC (the "Revolutionary Armed Forces of Colombia") has waged a civil war in Colombia since 1964. And FARC seized the baton of violence from the so-called liberals: the conflict between the Colombian government and the FARC grew out of the war between supporters of the Liberal and Conservative parties of Colombia that continued for a decade (!) in 1948-1958, (it is this violence, which claimed about 200,000 lives, was reflected in Gabriel Garcia Marquez's novel "One Hundred Years of Solitude").

In 2016, the outgoing President Juan Manuel signed a peace agreement with the FARC, but the majority of the country's population refused to approve the agreement in a referendum. Violence and fear did not stop although the FARC became a formally legal political party and changed the meaning of the abbreviation of its name (Fuerza Alternativa Revolucionariadel Comun - The Common Alternative Revolutionary Force).

The fact is that the violence in Colombia in recent decades has come not so much from the left, but from the right side of the political spectrum. Even the traditionally anti-communist British BBC reports that in the political sector Colombia has a radical, sometimes violent, right-wing tradition. (bbc.com)

The BBC admits that this tradition in Colombia is linked, among other things, to the murders of leftist politicians and cultural figures. The members of the so-called "The United Self-Defenders of Colombia" (Autodefensas Unidas de Columbia - AUC) especially often resorted to violence. For many years they proclaimed their task to wage armed struggle against the FARC rebels.  But in 1997-2006. under the pretext of  fighting the Colombian "chavistas," the AUC forces killed thousands of people; in 2006 the AUC was officially declared a terrorist organization and dissolved. Before that, this ultra-right group was reported to be involved in drug trafficking as well as in hostage-taking for ransom – the two types of criminal activity traditionally associated with the FARC. As for the level of violence, the AUC and their successors leave far behind Venezuela's government forces who have killed several dozen protesters in recent months.

In his propaganda war with President Santos, which is likely to soon turn into a propaganda war with the new Colombian President - Duque, Maduro and his supporters emphasize the ties between the Colombian government and the USA and the US intelligence services. There is nothing unexpected in this accusation: Uribe as well as Santos closely collaborated with the "advisers" from Washington and even invited the American armed forces into the country.

But now, when the chair beneath him staggers, Maduro considers Colombia as a "strike force" of US intervention directed at him. Recently  Maduro directly accused Colombia of trying to provoke an armed conflict with Venezuela and overthrow the "chavist" authority. (tdmendoza.com)

This Maduro's accusation against Bogota is worth listening to. In this situation Russia will have many allies among Latin American countries: after all, even cautious Brazil and Argentina turned against the Colombian President Santos, when in early 2010s Colombia started talking about deploying American bases on its territory. However, later the same countries which are part of the Organization of American States excluded Venezuela from their ranks for the deficit of democracy. Somewhat strange contradiction.  From this one can assume that the countries of the southern continent want democracy, but without American "supervision".