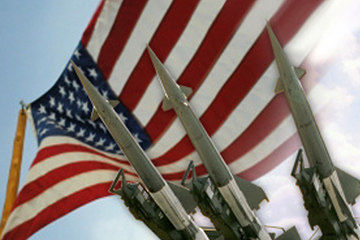 The functional feature of the contemporary BMD infrastructure of the US and its key NATO allies   is that their missile defense assets are never used per se or alone or separately from their strategic and tactical nuclear weapons. The BMD capabilities and nuclear arms always operate together. The exceptional case is when BMD interceptors kill a ballistic missile launched incidentally. Both the US global BMD and the European BMD, which are being put together collectively by the USA and NATO countries that will  be largely run by Washington, are prompt to protect the transatlantic alliance's nations not only from hypothetical ballistic missiles strikes to be made by a group of so far unidentified countries, but the US/NATO nuclear assets from a requital or counterattack from other nuclear nations, in case the USA and its NATO allies will lust for to launch a first-strike nuclear attack.

For this reason the ongoing deployment of the US missile defense in Europe poses a serious threat to Russia and its CIS allies as it parallels an upgrade of the US tactical nuclear arsenals sited in Europe.

It should be taken into account that over the coming decade the US Administration plans to pour unprecedented amounts of funding - $80 bln (if not $123  bln, according to a number of US expert estimates) – into maintenance and modernization of the US stockpiles of strategic offensive nuclear arms. The manufacturing of new types of nuclear weapons – the W-78 warheads for submarine-launched ballistic missiles in 2020-2026, the W-80-1 warheads for air-launched cruise missiles in 2020-2030, and the W-88 warheads for intercontinental ballistic missiles in 2026-2030 – is also on the US military agenda. Roughly within the same period of time, the US will spend $100 bln on the maintenance and modernization of missiles and aircraft equipped with strategic offensive nuclear arms and of aircraft carrying tactical nuclear weapons.

In June, 2011, the US National Nuclear Security Administration (NNSA) stamped a strategic and tactical arms modernization program aimed at life-extention of two types of strategic nuclear warheads and of four types of tactical nuclear warheads used in B-61 bombs. Importantly, these bombs are operationally deployed, and aircraft of the five NATO countries hosting US tactical nuclear weapons regularly conduct realistic combat exercises, in which non-nuclear NATO countries showing “nuclear solidarity” with the US in the framework of the Support of Nuclear Operations With Conventional Air Tactics program also participate.

The replacement of F-15E and F-16 aircraft with F-35 new-generation multirole fighters in 2017-2018 is supposed to boost the US tactical nuclear weapons delivery capabilities in Europe, the B-61-12 bombs being one of the types of weapons they are intended to carry. Reportedly, B-61-12 will have the yield of 50 kt - less than that of B-61-7 – but will be more efficient against heavily reinforced underground targets like missile silos due to considerably increased guidance accuracy.

Though the US National Nuclear Security Administration did not declassify the tactical nuclear weapons modernization budget for Europe,  Director of the Nuclear Information Project at the Federation of American Scientists Hans M. Kristensen believes that the total spending on the upgrade of the B-61-type bombs will likely top $4 bln by 2022.

It is of principal importance that today's US and NATO military-strategic doctrines afford the first nuclear strike against essentially any of the world's countries, including those in Europe. In fact, Europe falls into the scope of the nuclear strategy known as extended nuclear deterrence or  forward-deployment nuclear deterrence strategy, which is an approach which validates the permanent external deployment of the US frontier tactical nuclear weapons outside its borders. The anticipated revision of the NATO defense and deterrence policies in the run-up to the May, 2012 Chicago Summit of the Alliance will prompt yet heavier reliance on the strategy and tighter linkage – in Europe and elsewhere - between the three components of the US-led XXI century triad comprising the nuclear missile forces, the missile defense, and the conventional forces. It appears that the US and its NATO peers are pressing for a completely new military-strategic landscape in Europe, with massive deployment across the continent of upgraded nuclear arsenals made invulnerable to attack by ground-based, sea-based, airborne, and, potentially, drone-based missile defense systems. The nuclear capabilities will be integrated with a total of over 600 conventionally-tipped cruise missiles on board of four modified nuclear ballistic missile submarines of enhanced efficiency.

While at the moment the US missile defense capabilities in Europe and the threat they pose to Russia's security are limited, according to Missile Defense Agency chief LTG Patrick J. O'Reilly by 2015 only 38 (4.2 per cent) of the total of 905 modified interceptors will be sited in the continental US, while the rest (95,8 per cent) being deployed in various parts of the globe including Europe and Asia Pacific. With such configuration in place, Russia is going to be confronted with the nuclear and BMD threats both of which will be fully global.

An additional round of potential risks can be expected to stem from the European BMD program due to the US and NATO avoidance of any international agreement on prevention of deployment of weapons in space.

No doubt, the achievement of substantial accords between Russia and NATO on BMD would considerably improve their relations and the atmosphere of trust, and avoid the elements of the Cold War legacy of suspicion and mistrust between them. The implementation of a joint missile defense project could wipe out the confrontational mood in the strategic stability dialogue still felt as inertia borrowed from the Cold War, and to upgrade the Russo-NATO relationship up to the level that might be labeled as approaching the status of allies.

German diplomat Wolfgang Ischinger who chairs the Munich Security Conference pointed reasonably in a June, 2011 paper in Frankfurter Allgemeine Zeitung titled “A Security Roof over Europe?” to the importance of admitting Russia as an equal partner - and with due regard for its national interests - to the missile defense project. In Ischinger's view, Russia's integration into the missile defense program could mark an irreversible closure of the epoch of the Cold War between the East and the West, send a signal that nuclear deterrence has no future, and have a broad positive impact on the process of tactical nuclear and conventional arms reductions.

The European missile defense project could be effective if it becomes a truly joint scheme and when it helps radically change the rules of the game  in Russo-US-NATO inter-relationship for the better. If this project is implemented,  it could become a material contribution in the formation of a new European “security community”, free from dividing lines. Combined with the signing of a new European security treaty, the missile defense cooperation would facilitate the creation of the common security and stability space in the Euro-Atlantic zone and far beyond it.

In terms of immediate priorities, it is of great importance for Moscow that the missile defense built by the US and NATO in Europe does not undermine the Russian nuclear deterrent or provoke a missile-defense arms race globally. It has to be realized that the failure to reach a consensus on the issue can easily signal a start of this new type of the BMD rivalry.

Obviously, the optimal and radical solution to the problems standing in the way of the creation of joint missile defense would be Washington's consent to fully renounce the deployment of its BMD data-gathering assets and striking weapons in Europe (European NATO countries should be able to build a barrier against potential ballistic missile attacks independently). Such decision would be the best ever security guarantee the US and NATO can offer to Russia. As a halfway solution of the issue the US might abandon the idea of deploying the SM-3 Block II interceptors of different types, which as of today are supposed to appear at the third and fourth phases of the European Phased Adaptive Approach, or at least not site them in Europe, in the proximity of its shores, and near the borders of Russia and other CIS countries. Strictly speaking, the requirement should be that they stay away from Russia at distances greater than their interception ranges and thus pose no threat to Russian national security and its nuclear missiles.

It is unlikely that Moscow go ahead with a solid commitment concerning its involvement in the missile defense project with NATO unless the US and other key NATO countries provide it with written guarantees having no expiration date that the whole Euro-Atlantic missile shield will never be turned against Russia and its allies. Moscow  therefore expects to hear from the West at the May, 2012 NATO Summit in Chicago something greater than a simple political declarations on the importance of countering the threats bred by ballistic missile technology proliferation – by signing a special agreement on BMD cooperation with NATO, having the basic principles of Russia-NATO interactions in the sphere of missile defense, with specific military-technical parameters duly listed, would clearly be more appropriate. The deal should be subject to ratification and include legally binding guarantees that BMD assets will never be used against Russia. Russia is keenly interested in the West's releasing the technical specifications of the planned systems such as the numbers of interceptors mounted on launch pads or stockpiled, their locations, velocities and ranges, details of the interception algorithms, procedures for information exchange under emergency conditions, and the missile-tracking radar ranges. Naturally, Moscow would be under the obligation to supply similar guarantees to its NATO partners who will subscribe to the European BMD project.

Apart from potential interoperability between Russia and NATO in BMD domain a new BMD Treaty should be revitalised. But it has to be recast into a principally new multilateral agreement. It could  possibly limit the deployment of a land-based BMD infrastructure of states-participants to the accord outside of their territories. Any state having BMD assets and generally speaking any other state with no BMD potential could join in such an agreement.

No doubt that if the talks or consultations on the creation in Europe of a common missile defense by the US, other NATO countries, and Russia collapse, Moscow would have to take counter-measures to offset the resulting threat in the BMD sphere. As a potential response, Russian experts suggest strengthening the country's strategic nuclear forces, expanding the production of the new ICBM RS-24 Yars and submarine-based R-30 Bulava ballistic missiles, exploring new types of designs for their warheads, modernizing Russia's arsenal of tactical nukes, shutting down the possibility to conduct with Washington on tactical nuclear weapons reduction along with demanding that the US withdraw all its tactical nuclear weapons from Europe, deploying the Iskander theater ballistic missiles in the Kaliningrad exclave, the Krasnodarsky Krai, and Belarus, urgently installing missile defense facilities on Russian warships, re-engineering Russia's electronic warfare facilities, and expanding the Russian naval presence in the Baltic, Mediterranean, and Black Seas along with the Arctic and Pacific regions. Some proposals call for Russia's taking defense systems to outer space and pulling out of the New START Treaty, the latter actually being an option formally left open by the treaty.

Generally, chief of the Interdepartmental Experts' Working Group at the Russian Federation Presidential Staff on cooperation with NATO on the BMD Dmitry Rogozin wrote in Krasnaya Zvezda on November 17, 2011 that Moscow's response in the case must be “tough and unpleasant” to the Western countries attempting to put Russia under missile-defense pressure. The above and possibly some further suggestions aimed at protecting Russia's national interests should certainly be put into practice. Russia's national security being the key imperative, Moscow simply has no right to tolerate – at present or in the distant future – any destruction of the strategic parity between Russia and NATO.

If, contrary to Moscow's intentions, confrontation over the missile defense really commences between Russia and NATO, the full responsibility for it will rest with Washington and its major NATO partners.