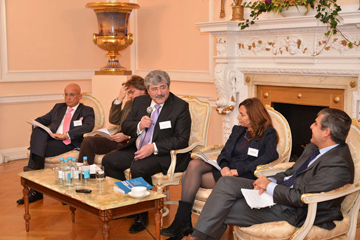 "International Affairs" magazine, with the support of the Embassy of the Russian Federation in London, hosted an international conference on "The Arab Spring: scenarios for the future."

Before the conference began, the Russian Ambassador to the UK, Alexander Yakovenko, read out a letter from the Russian Minister of Foreign Affairs Sergei Lavrov, who in his address, noted the importance of the topics at the conference.

The conference was opened by the Editor- in - Chief of "International Affairs" magazine, Armen Oganesyan,  who  talked about the long history of the prestigious magazine.

The participants in the conference talked a lot about the causes and preconditions of the "Arab Spring", and on the factors that influenced the escalation of the already difficult situation in the Arab East.

It is also important to note that these dramatic events are far from over. The phenomenon known as the "Arab Spring" includes a whole set of factors, circumstances and consequences, from the economic to the civilization and geopolitical spheres, so it is important to realize what is happening and to try to find a way to stabilize the situation. The world community must exist

in the framework of international law, which allows each country and each state, to

SOME FOOD FOR THOUGHT

– The Middle East is in the throes of a momentous transformation. Those processes have been evolving at an accelerated pace following the spring logic: the longer and harder one presses a spring, the faster and the more energy is released, when the pressure is lifted. Two major factors account for that effect: suppression of the first wave of awaking in the region with the overthrow of the Mossadeq Government in Iran, followed by the Suez crisis, change of regime in Egypt and the US-Saudi agreements of 1974-1975 in the aftermath of the Arab oil embargo, and the 20 years wasted in terms of soft-landing the region into modernity after the end of the Cold War.

– The Arab Spring, among other things, opened the door for “Al-Qaeda” to pursue its chief objective, i.e. control of the Arabian peninsular, and it will be next to impossible to shut it. Before that the extremists had to put up with conducting operations on the margins of the Arab world.

– So far it seems, that time and context, both regional and global, have been on the Syrian Government’s side. But time has also been on the side of the extremists, breeding radicalization within Syrian opposition and abroad, including the Euro-Atlantic area.

– Anyway, the combined regional experience of the last 3 years (Yemen, Libya, Tunisia, Egypt, Iraq, Lebanon and Syria) provides enough material for making judgments, not only by the elites and outside observers, but also public at large of the countries of the region, on the real choices in this transformation. This experience, of course, covers the Iranian revolution and Iran’s subsequent evolution, including its form of democracy.

– As to the regional context, the events, like in a fast-forward mode, show different stages of the revolutionary processes as if compressed in time. In that regard it differs substantially from the Revolutions in the Euro-Atlantic history. The choices and stakes are much clearer, including Bonapartism and chaos, breeding extremism with its logic of bringing the most ruthless and ideologically-motivated on top. Will and, if yes, when there be their Glorious Revolution or Napoleonic Code? How to bring about necessary reforms if any stability is to make transformative sense in the long term?

– Chemical disarmament of Syria provides the entire international community with a long-sought-after common denominator. How could that unity be capitalized on to bring about a political process in Syria, leading to a settlement of the present crisis? It also provides a counter-game to the game of some regional powers, eager to shape events rather than being shaped by them. The UN-led effort cannot help restore the former strategic oversight of the region by the West, but presents a chance for bringing to bear a truly collective outside influence.

– This factor distinguishes the present situation from the long tragic revolutionary experience of Europe, where the XIXth Century political elites tried to prolong, against all adds, the XVIIIth Century in resisting change, brought about by the mass political awakening (Zb. Brzezinski) and technological revolution. A collective failure of European politics made WW I an inevitable catharsis. The Industrial Revolution involved immense human cost. The industrialization in the Soviet Union in the XXth Century was accomplished at no less cost, with its own equivalents of enclosures and vagrancy laws and a different choice of products of European political thought as ideology.

– In all, it took two world wars and the geopolitical imperatives of the bipolar confrontation of the Cold War to find a way to a more equitable society, including gender equality and broadly-based representative democracy, compatible with market economy. It led to a sustainable model of economic development nationally and a more or less stable bipolar international order, that made the XXth Century a Russo-American century, as A.de Tocqueville predicted in his Democracy in America.

– All of the Euro-Atlantic history, including the fact that it took more than a century and a half to travel from 1789 to 1945, give sufficient reasons for humility in our approaching the Middle East problems. However, the region could benefit not only from our experience, but also from the advantage of the international community’s potential to help bring the transformational process onto the political track, thus cutting costs in human life and destruction, not to mention the consequences for the world at large.

– The Arab-Israeli conflict has long been a major factor of radicalization in the region and Muslim communities worldwide. Can Israel as a Jewish state (unlike a modern European state) and an incarnation of the third Temple bring about a sustainable solution of this conflict or will it play into the hands of the extremist forces bent on thwarting modernization of the region?

– How international community’s unity could be capitalized on to help Syria, other countries in turmoil and the region at large to find a shortcut to a sustainable evolution of their societies for the benefit of all, including the outside world? It is a factor that can make a crucial difference. It would be a realistic alternative to either restructuring of the regional politics along the lines of the Sunni-Shia confrontation or a regional implosion, which some hope might drain/absorb the energy of the extremist forces, but at what cost, including in terms of uncertainty and unpredictability in the region’s development for a long time.

– European nations in turmoil didn’t have that advantage, being left to the mercy of the play of regional powers with their political elites quite often not in their best intellectual and otherwise shape. That is why Saudi Arabia’s decision not to take up its seat on the UN Security Council is a worrying sign of impending trouble between regional players and international community.