Convincing victory of “populism” in Nicaragua 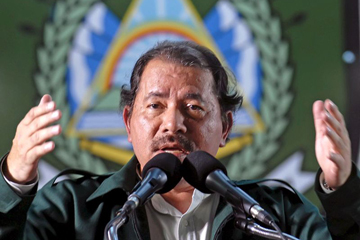 On November 6, Nicaraguan president Daniel Ortega was re-elected winning 64 % of votes. The key points of his election program are laconic and comprehensible for Nicaraguan people: socialism, Christianity, free market. Ortega’s opponents have failed to come up with a more convincing alternative. His closest rival - an 80 year-old (!) Fabio Gadea from the Independent Liberal Party - received 29 % of votes. The preliminary results show that Sandinistas and their supporters will prevail in the new parliament.

As it was expected, the opposition and “non-governmental organizations” are now disputing the elections’ results. The talking point is standard: “Sandinistas trafficked with the votes and the Supreme Electoral Council facilitated the fraud”. The situation reminds of the events in Venezuela: no matter with what margin Hugo Chavez won his rivals the opponents always began to shout “Fraude! Fraude!”.

Earlier Daniel Ortega and Sandinistas also faced such accusations. After the municipal elections of 2008, the US ambassador in Nicaragua Robert Callahan, who had the reputation of a successful “expert in undermining operations”, decided to achieve “the right results”. For this purpose he secretly supported (and financed) street riots, staged by the oppositional parties and NGO’s. Following the recommendations from the US’ government, the Liberal-Constitutional Party demanded a nationwide recount of votes in the presence of foreign monitors. Sandinistas took Callahan’s efforts on “restoring order in Nicaragua” as an attempt to force Washington’s dictate. Any concession could lead to the loss of power.

From time to time Callahan replaced his stick policy with carrot policy promising the increase of investments, higher profits from tourism, unlimited money transfers from Nicaraguan citizens working in the US, privileged supplies within defense sector cooperation etc. He guaranteed that Nicaragua’s income in all these fields will amount to more than $500 million annually! And if so, would it be reasonable for Sandinistas to ignore Washington’s interests? Callahan’s stay in Nicaragua in the rank of ambassador was full conflicts, arguments and critical statements aimed at the “regime”. Ortega had to warn Callahan several times that such provocative statements and acts were inadmissible and he was risking to be announced persona non grata.

When the conflict reached the critical point the US State Department announced that Callahan would be soon replaced with a new ambassador. On failing to implement the US State Department’s plans on weakening Sandinistas, unification of the opposition and putting forward a “competitive” leader from the opposition, Callahan left Nicaragua in July. However, hard undermining work against Ortega did not stop.

Around the same time a delegation of “non-governmental activists” who represented “NicaNetwork” organization came to Managua. The organization has been fighting for the change of Washington’s course in Nicaragua for more than 30 years, standing against the US undermining activities in that country. On having discussions with NGO’s officials, leaders of the political parties, officials from the US embassy the delegation’s members made sure that the attempts to influence the outcome of the elections in Nicaragua in the interests of the US are becoming more and more obstinate. Dozens of NGO’s in Nicaragua are financed via USAID (the United States Agency for International Development), “International Republican Institute (IRI)”, "National Democratic Institute (NDI)”, as well as via some Western European “backing”. Journalists, bribed trade union activists and student leaders receive relevant propaganda training.

To intensify work in Nicaragua, the US State Department picked a seemingly suitable candidate for the post of the ambassador in Nicaragua: Jonathan Farrar, an expert in South America, who had headed the US department on Cuba for three years. However WikiLeaks publications let Farrar down. The dispatches from Havana he signed contained negative comments on some Cuban dissidents, their greed and incapability to act efficiently against “te Castro brothers’ regime”. Farrar also doubted reliability of the Cuban opposition.

It happened many times that a “field-proven” person turned out to be an agent of the counter-intelligence. Some American senators of Cuban origin did not like such conclusions.  During an interview with Farrar in the Senate they asked him many hard questions and came to the conclusion that he had neglected his duties on the island. They stated that while the US was fighting for the ideals of democracy and freedom in all fields, Mr. Farrar avoided the implementation of this honored mission working on Cuba. It is not reasonable to recommend him as a new ambassador in Nicaragua. That is why it is charge d’affaires, who is still running the US embassy in Nicaragua.

Although the Supreme Electoral Council of Nicaragua has not announced final results of the vote yet, the observers from the EU, OAS and different NGO’s have begun to talk about different “anomalies” and “deviations”. Roberto Courtney, the chief of NGO “Ethics and transparency” who has been actively cooperating with USAID, named the election system in Nicaragua the worst in “Latin America”. He was supported by another “proven person” from the US embassy - Mauricio Zuniga, head of the Institute of Development and Democracy (Ipade). The loudest statement was made by right activist group Let's Have Democracy. It claimed several hundreds of violations at the elections, including the detentions of oppositional activists. It does not matter whether it took place or it didn’t. What is important is to give a signal at the right moment.

Talks about “Chavez’ involvement” in the election campaign have resumed. It is claimed that Ortega’s high ranking officials made suitcase trips to Caracas and returned from their with suitcases full of dollars. Pro-American mass media and ambassadors’ reports (WikiLeaks) mention different amounts (usually between $1bln -1.5 bln). Indeed the Venezuelan financial aid was used to encourage potential voters in the regions. They received construction materials, zinc for roofing, cattle etc. Ortega is not trying to conceal the fact that Chavez’s support helped to expand national programs on micro lending, food aid, housing construction, improvement of education and healthcare. With the help of Venezuela the problem of shortfalls in electricity supply was resolved. Guaranteed supplies of Venezuelan petrol and diesel fuel (28,000 barrels daily) put an end to the permanent energy crisis in Nicaragua. Fighting poverty remains one of the key issues for Sandinistas but Ortega does not forget about the interest of businessmen either. That is why the circle of his supporters is not limited to “humiliated and insulted”.

Chavez was one of the first leaders who congratulated Ortega with his reelection. The geopolitical meaning of this victory is difficult to overestimate … With Sandinista president Nicaragua ensures the presence of the ALBA bloc in Central America. Washington was satisfied with the victory of general Otto Perez Molina at the election in Guatemala (the same day with Ortega): Sandinista is blocked from all sides: Honduras, Panama, Costa Rica, Guatemala. In Salvador, it the leftists who are in power but these are the leftists who take care of the right interests first of all.

When congratulating Ortega with his victory, Chavez, meaning “sudden’ ailments of Paraguay’s Lugo, Brazil’s Lula and his own disease, urged his Nicaraguan friend to keep sharp lookout for himself: “Take care of yourself because all these strange cases with cancer and other diseases set us thinking of something. It does not mean that we should live with a fixed idea or persecution mania but it is undisputable that the Empire always used murder as a state policy”. Chavez gave the same piece of advice to Evo Morales, Rafael Correa and Cristina Kirchner.